The Ukraine war as metaphor 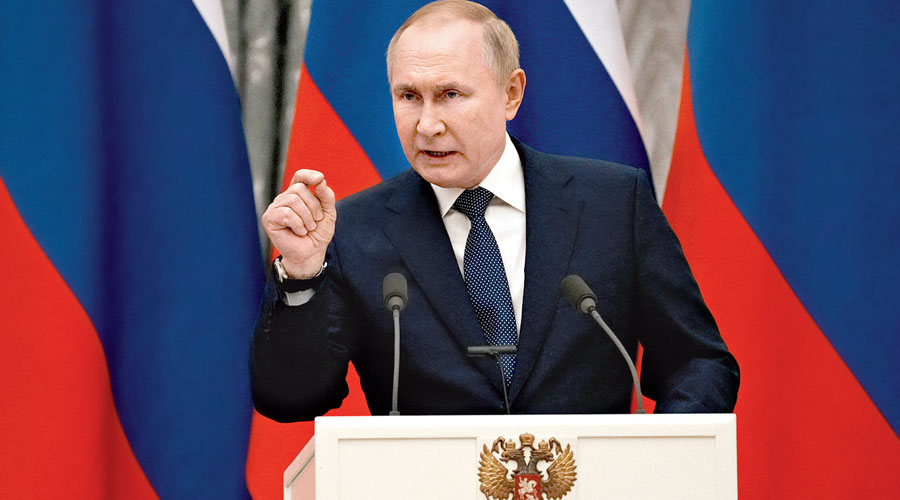 War for all its brutality has a predictable quality. Violence is followed by a wrinkle of a response, a hiccup of clerical emotion and, then, life moves on. One senses normalcy has become a prized virtue today. We enact the idiocy of international relations as a script and the emptiness of the United Nations to demonstrate both our indifference and our helplessness. Even goodness has a predictable trajectory. NATO plays good cop, issuing boycotts and threats knee-jerk style. Villainy, goodness, hysteria have all become stale, acquiring the vintage quality of a two-paragraph report. Brutality confronts the banality of response.

Three things are clear. First, the emptiness of international relations as a moral world. Second, the failure of moral voices in civil society, where even Pope Francis becomes an absent-minded footnote of protest. Third, one senses the amorality of political life, where war and violence become mundane affairs. Syria, Afghanistan and Ukraine become similes for the world’s indifference towards violence and suffering.

India emerges like a moral mutant, with Narendra Modi clericalizing war. Retired ambassadors wax nostalgic in editorials, which reveal their repressed narcissism. We made a huge spectacle of recovering students from Ukraine, but one senses these students studying in Ukraine had little to say about the conflict. Today, medicine as a mercenary endeavour allows you to acquire your degree anywhere. The label, ‘Operation Ganga’, had little to say about India beyond conveying a smug sense of self-satisfaction. India has no confidence in being a moral voice in international affairs. It explains it away as evoking the new realism, a pragmatic approach where politics has little to convey beyond a mouse-like natural interest. Modi looks smug as India remains silent and tactical. A few phone calls to international leaders reveal the extent of his investment.

Behind all this is a failure of memory and morality. War, today, is clear in treating human lives as dispensable. In this post-truth period, neither life nor truth matters. In fact, one senses a fondness for an old phrase, the nostalgia for the idea of Empire. Russia, China, the United States of America are all replaying the old games of Empire. It allows arrogance to be a moral necessity. Dissent becomes helpless, even comic-book, in the face of such an amoral officialdom.

Interestingly, the idea of evil has no demonology as evil, now played by Vladimir Putin, acquires a swashbuckling character. Evil dutifully enacts the fantasies of Empire, of control, pretending as if it is punishing a recalcitrant fragment. Putin is presented as a decisive character bombing indiscriminately to reassert his machismo. One senses leaders and spectators are envying him. Many an Indian has wished that one could treat an irritant like Pakistan with similar impunity. It does the national ego a lot of good. Empire is not an invocation of an outdated world but an enactment of a current fantasy. Emperor Putin captures it all, as Russia bombs Ukraine. The only event that might surprise him is the vehemence of Ukraine’s resistance.

Watching the scenarios being played out, one senses, again, the refugee as the most poignant creature in today’s politics. A refugee no longer belongs. He is a fragment of a former life. All he has is memory. He grasps his aloneness in his vulnerability. In a few weeks, the media will forget him as politics turns pragmatic and nation states realize that there is a Putin in all of them.

One senses that no attempt at peace can currently match the satisfying intensity of war. Yet peace is what we desperately need. Peace begins with care, concern, and memory. One must add to it a sense of sacrifice. One must help sustain the victim. Peace begins with individuals reaching out to the other. Peace refuses to forget because forgetting is a form of injustice. India desperately needs a peace movement that goes beyond its pragmatism as a nation state. A nation, by definition, is a refusal to understand the local and the vulnerable. An Empire is an unforgiving nation, narcissistic about itself. Putin expands not only to grab territory but to inflate his role in history. Ukraine brings out the primordialism of the Russian nation state.

There is a grey neutrality about newspaper reporting, as if the media have not found the language to describe a Putin. One senses the parody and the irony of violence as a stand-up comic becomes the leader of Ukraine. It is Volodymyr Zelensky who captures the poignancy and the tragedy of war when he states that it is not death alone that is distressing but the sadness of the death of freedom. Europe is, once again, divided into two, as a new wall is built around Ukraine.

Sadly, Indian writing on Ukraine reads it as a Russian frontier, a tourist space, or invokes it in terms of the nostalgia of World War I literature. One quotes Kafka when Robert Musil would be more relevant. A Putin would be ‘the new man without qualities’, indifferent, reading life as empty recipes. We need a new imagination to understand war today. Both the quality of evil and language have changed. There is a colourlessness to evil which is difficult to unravel. Often Putin portrays war in the language of an upwardly mobile aspirant. One has to sense that post-truth as a narrative goes beyond the Orwellian legacy.

As one explores the archives, watches television hosting the chorus of predictable comments, one senses that Ukraine has become a metaphor, a heuristic about how to neutralize the immorality of war and create indifference among democracies about violence. It offers a picture of mock outrage which yields to pragmatism, while pragmatism moves to indifference. The everydayness of power is recognized and nation states adjust to it with homeostatic ease. Indifference leads to erasure, and erasure to triage as the cannibalization of Ukraine is seen as a necessity. The West wants to control Putin. It is not bothered about Ukraine. The sadness of erasure begins there. Ukraine has to become a collective mnemonic for Syria, Afghanistan, the Rohingya, the Uighur in camps in China. The rituals of erasure have to be replaced by a new politics of memory, a mnemonics of trusteeship. Otherwise, these lands will be deleted and forgotten. The cannibalism and the amnesia of the nation state have to be challenged. India should stop aspiring to be a potential Putinate and create an ethics of memory that sustained it once as a civilization.