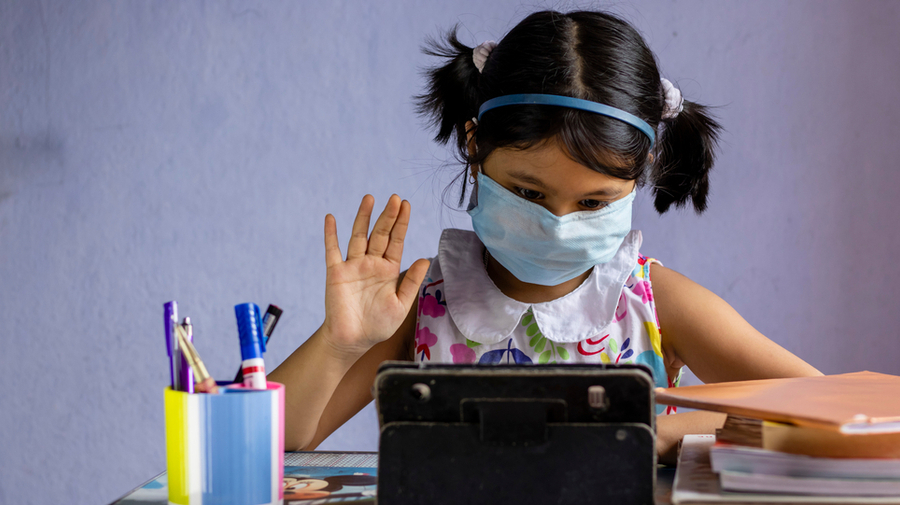 Digital access might be impaired by many factors, such as lack of connectivity; but the most basic reason is sheer lack of a device. Only 8 per cent of India’s students have a laptop with internet connection.
Shutterstock
Sukanta Chaudhuri   |   Published 27.11.20, 12:34 AM

This article is about educational deprivation owing to the digital divide. It is emphatically not an attack on digital instruction as such. The digital medium is an invaluable pedagogic asset. It can endlessly store and convey knowledge material, present it in innovative ways, transform the world of learning for student and teacher alike. It has been the readiest recourse for remote learning during the Covid lockdown. Hence students deprived of it have taken their own lives: most recently, an undergraduate at an elite Delhi college. Earlier victims include young schoolchildren.

Digital access might be impaired by many factors, such as lack of connectivity; but the most basic reason is sheer lack of a device. Only 8 per cent of India’s students have a laptop with internet connection. The rest cannot look beyond a smartphone — a clumsy means of accessing study material, let alone writing exam answers. In the state government schools attended by the mass of students, even this support is enjoyed by only 56 per cent, according to the Annual Status of Education Report. The supply of all learning material, online or offline, during lockdown has been inadequate and irregular, more so in some states than in others. Nearly two-thirds of rural schoolchildren received no material whatsoever. Many even lacked textbooks: 65 per cent in Andhra Pradesh, 40 per cent in Rajasthan.

As adult incomes plummet, more and more children are leaving school to earn a living. (At least in some states, nearly half did not even receive midday meal rations.) One estimate pegs likely permanent dropouts at 20 per cent of enrolment, reverting to the level of 2004. Juvenile girls are being married off or even trafficked. The gap in fresh enrolments in rural primary schools has increased threefold. States like Andhra Pradesh and Uttar Pradesh have launched programmes to tackle dropouts. The silence of the Union government is deafening. Yet this is an India-sized challenge calling for federal funding and execution, perhaps on the lines of Bengal’s Unicef-acclaimed Kanyashree programme.

The school sector has at least seen some action during the pandemic. The NCERT has published an excellent survey-cum-manual. Many states are running continuity programmes, Karnataka’s Vidyagama scheme perhaps the most elaborate. These efforts utilize printed material like study sheets, even controlled physical meetings. But electronic instruction remains the default mode, effectively ignoring the yawning digital divide. It is silently assumed that unequipped students will fall by the wayside. A study by the Azim Premji University found their proportion to be over 60 per cent in state schools.

The assumption is pervasive in higher education. Unlike the NCERT, the UGC has conducted no survey, issued no pedagogic guidelines. It has merely publicized the learning material already available on its websites, without suggesting how students of limited means or at remote locations might access it. Digital instruction is showcased in a vacuum, with no concession to ground realities. An influential vice-chancellor assumes that India’s 500 million smartphones necessarily cover each of our 34 million students. Every student suicide cruelly refutes this claim. At the University of Hyderabad, over 10 per cent of students were found to lack smartphones, and 18 per cent proper connectivity. A handful of colleges have ensured online access for every student. Within my imperfect knowledge, only one university, Jadavpur, has done so.

We thus have a conflicting scenario. On the one hand, digital education is advocated more stridently than ever. By a naïve fascination with technology, it is seen as an absolute advance over “age-old classroom teaching”, to quote the same vice-chancellor. I began by stressing the real benefits of digital learning. But this total and uncritical immersion in the mode, rather than a nuanced use of digital resources by the human teacher, makes for a reductive and mechanistic programme of learning. Yet it is touted as the strategy of choice for the future, beyond the short-term imperatives of the pandemic.

This reductive policy will save the authorities money. Online courses on shared platforms would cost a small fraction of teachers’ salaries. (It would also ensure mental regimentation of the academic community.) However, costs would rise if course production is outsourced to the corporate online-learning lobby for whom the pandemic has been a bonanza. And the individual student would spend substantially more on devices and connectivity, given our policy-makers’ assumption that education, especially higher education, is a private not a public good. Poorer students may thus be excluded from even high-school education, or confined to its deprived levels. Such stratification has long been entrenched at the school level and is fast pervading higher education.

It need not be so. It is abundantly possible to bridge the digital divide. In its intrinsic technology, the digital platform is socially neutral. Artificial intelligence even allows a measure of personalized learning, though never by eliminating the human teacher. It is an exciting prospect of immense promise, provided it is not implemented in a vacuum, ignoring the profound disparities of access.

Some hard facts must be admitted. A productive and equitable model of digital learning for the entire nation would involve more expenditure, not less. It would not materially reduce the human workforce. These non-negotiable needs clash with the syndrome behind our current educational planning. The planners’ dream seems confined to a spruce, secure, formalized network with impressive buildings and gleaming infrastructure — a desirable but inadequate scenario, producing amenable students and faculty, customized workers for an approved economic and social order. True intellectual endeavour prompts questions and breaches barriers: it progresses by probing, unsettling, redefining. Instead, this limited pre-ordered goal will foster an undemanding management-friendly system, its curricular structure bounded by the current job market, shunning the disruptive innovations of an active knowledge economy. However brilliant its students and faculty — indeed, the more so — such a system cannot harvest their full creative potential. At the same time, it is expensive to set up and run. India can afford only a limited network, even by intensively deploying private capital.

A restricted, formalized order simultaneously creates informal, intractable growth in the excluded territory beyond it. The showpiece high-rise and the neglected slum have always been the twin coordinates of the Indian polity. Our current rulers seem bent on maximizing this wasteful, underproductive, binary model: bullet trains and a parliamentary complex before an adequate public distribution and nutritional system to tackle suppressed hunger, a packaged insurance deal rather than hands-on engagement with the messy issues of public health. Our desired economic order would be structured, corporatized, and intensively digitized. The unorganized sector must fend for itself, its fit symbol the plight of migrant labourers during the pandemic.

So too the new National Education Policy seems to include the excluded sector, so to speak, by relegating it to subaltern status. The initial draft NEP was of wide and multiple scope. It has been scaled down to the above template, insidiously reducing funds and lowering benefits for the unprivileged. Higher education will be split into three tiers (besides the ever-widening gaps between public and private, Central and state-run institutions), the lowest confined to bare-bones teaching without any leavening research environment. Most crucially, schoolchildren from the social margins, explicitly including tribal forest communities, will be fobbed off with ‘less emphasis on input and greater emphasis on output’ — to translate, limited underfunded facilities, not excluding the Open School system devised for child labourers and dropouts. In a word, the growing inequality of our economic life will be perpetuated by human resource management for the future. In a recent article, the Union education minister talks of “several pathways”, including “non-formal education modes” with minimal “[r]egulations on inputs”, invoking the “Right to Education” but not the Right to Education Act, with which such provisions are incompatible.

Far from being integrated, the ‘several pathways’ will serve as division markers. The digital divide will inevitably widen. It will be the most visible symptom of a fundamentally divisive educational order that squanders and undersells the greater part of India’s human resources.