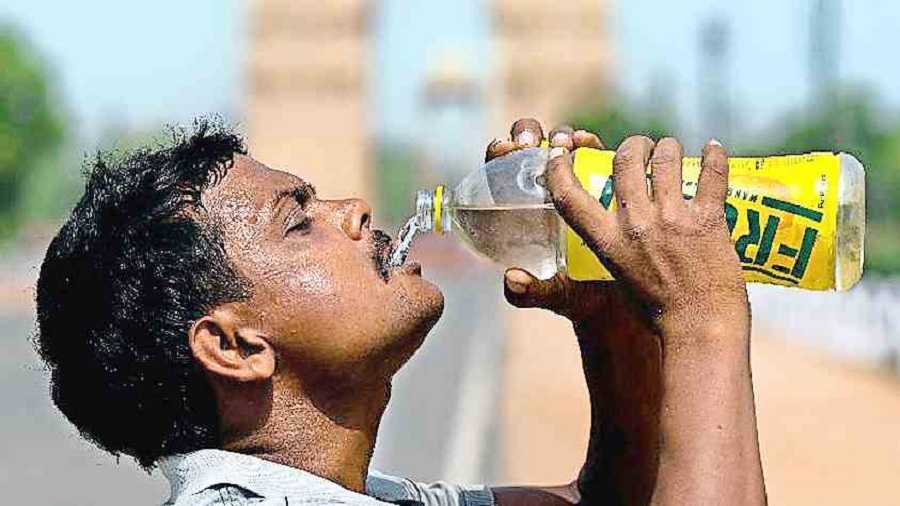 This summer, Delhi went through as many as six heat waves, the sizzler being in mid-May.
Sourced by The Telegraph
Gopalkrishna Gandhi   |   Published 24.07.22, 02:59 AM

Chennai, Bengaluru and Delhi are the three cities in which I spend most of my time. So, what happens in them affects me. It becomes part of me. Over June, the sun scorched Chennai. The temperature hovered around 38 degrees celsius, touching and crossing 40 degrees celsius on certain days. And in Nature’s response to this, the skies above the city rained. At 44.98 mm on June 21, the city recorded its heaviest rainfall in ten years. Memories of the 2015 floods were disturbingly stoked but to the city’s relief, the waters stopped short of touching that dangerous watermark.

June this year was  the wettest June Bengaluru has known in full ten years. At 198.5 mm for the month as a whole, the city was soaked wet. There was a pattern to this: it rained, generally, in the evenings and through much of the night, the slush making it impossible for Seniors to go for their walks in the pleasant pre-twilight or in the early morning.

This summer, Delhi went through as many as six heat waves, the sizzler being in mid-May, when the temperature touched 49 degrees celsius. On June 8, Delhi’s temperature stood at 44 degrees celsius, described as ‘four notches above the season’s average’. The city was officially declared as passing through a heat wave.

‘We, the people’ of Chennai, Bengaluru and Delhi mopped our brows and pitied our collective fates.

But is that all that we should be doing? The climate changes, we do not. I speak of most of us, ensconced in cities.

Climate change has lost no time; climate-change warriors in the shape of whistle-blowers have not either, but ‘we the people’ have lost time, though we do not quite understand how, by our ‘couldn’t be bothered’ ness.

And through this all, Covid-19 in its new variants, best known by the one called Omicron, quietly, almost sneakily, continued to spread across the country  with  a never-say-die determination. Chennai and Delhi had more active cases on July 1 this year, 2022, than they did last year at the same time. (The Bengaluru and all-India figures show us being better off this year than last year). ‘The virus is not over’, we were told. But underlying that was a subtext that said ‘It is not like what it was, not so widespread or so virulent, but it is there…’ The virus’s present avatar is a moderate-sounding member of what is essentially a dangerously fundamentalist outfit — the coronavirus. Fewer hospitalisations and fewer deaths due to the ‘mild’ variant do not mean that the virus has decided to turn soft for all time or that it is not going to be joined by other diseases, including vector-borne ones, triggered by climate change, to swipe us and the rest of the world in ways unbeknown to us now.

Percy Bysshe Shelley has a poem called “The Cloud”, with a famous line in the voice of the cloud: “I change, but I cannot die.” The novel coronavirus changes but does not die. At least it has not, so far. It is mild, it was said this summer, you get a passing fever, and before you have as much as felt it, the thing has gone. The rate of vaccination-seeking dropped, manufacturers were left with unlifted stocks. And, most tellingly, the price of masks per piece, fell.  We flocked everywhere, mixing and milling as ever, the high and mighty amongst us, no less than us, ourselves. And did not have any use for the mask.

So, we have before us this phenomenon of bizarre weather patterns and the weird virus acting like allies in a war-game against us, the child-like authors and victims of our own ways, lifestyles. While the knowledgeable sensed the danger, knew the glaring truth, did anyone, anywhere in India, speak out about this situation, its portent? By ‘anyone’, I mean someone in a high seat in India. And by ‘anywhere’, I mean not in webinars organised by the earnest for the innocent but in national platforms addressed by the powerful for us, the peoplehood of India. Has anyone in authority said to fellow-Indians that this ‘double whammy’ of climate change and the pandemic holds danger, that we better do something about that danger, together, and fast?

One person has been doing that consistently — Dr K. Srinath Reddy, president of the Public Health Foundation of India. In a recent article (The New Indian Express, July 8, 2022), he says: “... humanity does not have the luxury of time to deal with these two threats separately and sequentially. It is no mere coincidence that these two mainly anthropogenic disasters are simultaneously demonstrating their sinister strengths through the prolonged Covid pandemic and unprecedented levels of global temperature rise, noted since 2020.”

He ends by sounding a warning: “The clock is ticking fast on the climate front. Covid-19 has sounded the alarm that many dangers created or accelerated by human folly need a determined response to reduce their impact.”

Wiser words have not been spoken in our pandemic and climate-change times. Nor more timely ones. But when have wise words been heeded by the unwise? Or timely warnings been acted upon by the self-deluded?

So, are we self-condemned to more agonies, more disease and death?

Are the games of power, of wealth and of giddy competition going to absorb us so completely as to make us the chess players of the Oudh of 1857 that Munshi Premchand wrote of in his timeless novella, Shatranj Ke Khilari, and Satyajit Ray turned into a great film with the eponymous title? Are we going to go cavorting mindlessly to utter grief ?

I await a strong and caring voice that tells us the bitter truth that Dr Reddy has spoken, but this time from the authority of what is called ‘Public Office’, and corresponding action like, for instance, that of the late Rajkumari Amrit Kaur who, as Union health minister, launched the BCG vaccination programme and initiated the nation’s first major mass immunisation programme. Or the late C. Subramaniam who, as Union minister for agriculture, told us that we were living “ship-to-mouth” and must become self-sufficient in foodgrains production superfast or — starve. The late V.K. Krishna Menon has been seen as the Union defence minister who failed us in the 1962 Sino-Indian war. But as closer observers tell us, it was his restless work in making India self-sufficient in defence production that helped us get, under Prime Minister Lal Bahadur Shastri, our victory in 1965. Menon was not in office then to receive credit.

We miss such a voice, such an example. Climate change and Covid-19 are dangers that demand of us, the people of India, certain hard self-regulations. Asking those from us is difficult. But explaining why they were not asked of us, when it is too late, will be much more so.

A great song of Elton John’s is: “Sorry seems to be the hardest word”. It should not become the word our generation will hear in a howling desert of futility.

The columnist acknowledges inputs on Covid-19 status from Ramya Kannan, interpretations being entirely his.