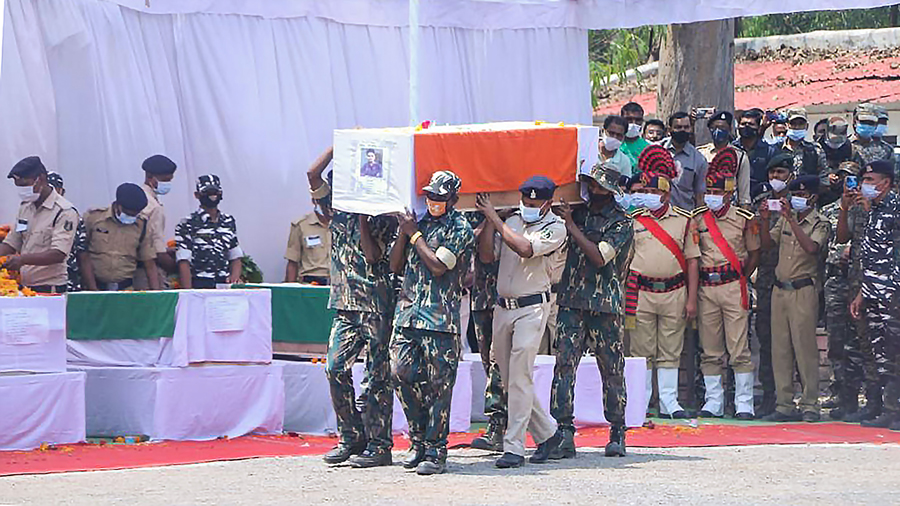 Bastar: Army persoonel pay tribute to the soldiers who were martyred in the Bijapur Naxalite incident, in Jagdalpur police line.
PTI
The Editorial Board   |   Published 06.04.21, 12:02 AM

Bastar bleeds with a frequency that is chilling. Yet another ambush on security forces by Maoist insurgents in Bastar has led to heavy casualties. The recent attack — over 20 security personnel perished in it — had been preceded by similar strikes whose frequency has apparently increased since demonetization. The Narendra Modi government’s claim that demonetization had broken the back of the Maoist movement by choking their funds clearly merits closer scrutiny, as do the concerns that have been raised regarding the tactical and operational problems that continue to plague the security forces. There is scope to improve the quality of intelligence — the jawans had walked into a well-laid trap on Saturday. The scale of missions must be flexible: smaller teams acting on reliable intelligence have greater chances of success than operations involving ponderous troop movement.

There are infirmities in the political stratagem adopted by successive Central governments. Soon after assuming power, the National Democratic Alliance, which had lambasted its predecessor, the United Progressive Alliance, for being soft on Maoists, had adopted a four-pronged strategy that prioritized security, development, the protection of the rights of tribal people and the management of public perception. It is now fairly evident that security has been prioritized over the other — equally critical — elements in the policy. The adoption of an iron hand has been the favoured strategy at the Centre. It has had some success: the theatre of conflict has shrunk to 30 districts. But an iron hand will not be able to eradicate the malaise: for that, it needs to be fitted in a velvet glove. This would mean severing the public support that the insurgents rely on. This, in turn, can only be achieved if the Centre is able to strike a healthy balance between security concerns and public welfare. Addressing the grievances that led the movement to strike roots — the stripping of the rights of the tribal people over land and other natural resources, embedded discrimination against indigenous people, poverty and its affiliated traps, predatory industrialization, to name a few — could be one way of re-engagement. Intermediaries — bona fide civil society groups and non-government organizations with deeper knowledge of relevant issues — should be accommodated into the parleys. Bengal, under Mamata Banerjee, fused the fist and the glove well to neutralize the red menace in the state. The Centre could learn from that experience. Given the state of federal ‘bonhomie’ in India, such collaboration is unlikely.