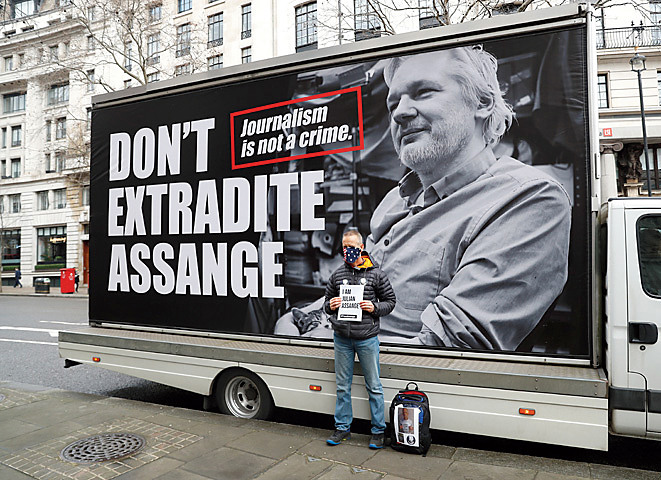 A pro-Assange demonstrator stands outside the Australian High Commission as they gather to protest against the extradition of Julian Assange, in London, Britain February 22, 2020.
REUTERS/Peter Nicholls
The Telegraph   |   Published 24.02.20, 06:34 PM

Sir — The hearing of the case regarding Julian Assange’s extradition from the United Kingdom to the United States of America on charges of spying has thrust the controversial whistle-blower into the limelight once again. Legal actions against him would have far-reaching implications for people’s right to know. While wrongs should not go unpunished, neither should journalists have to fear State retribution for speaking the truth. The manner in which the charges against Assange are handled will be a crucial test for not only the future of journalism but also the independence of the judiciary.

Sir — The report, State of India’s Birds 2020, released at the United Nations Convention on the Conservation of Migratory Species of Wild Animals in Gujarat, paints a grim picture (“Silent skies”, Feb 24). Regular birders have been noticing a dip in the numbers of avian species like the ferruginous pochard, gadwall, common coot and others for a while. The construction of high-rises beside waterbodies, shrinking lakes, poaching and excessive fishing are some of the reasons that have contributed to the decline in the number of migratory birds visiting India.

Initiatives taken by some individual bird lovers and organizations such as the Bombay Natural History Society and the Sálim Ali Centre for Ornithology and Natural History are thus inspiring. The conservation efforts of the breeding centre inside Buxa Tiger Reserve that saw the successful release of six captive-bred Himalayan griffons must be lauded as well. It is also heartening to note that although sparrow populations have gone down in metropolitan cities, their overall population is holding stable.

Sir — Alarmingly, the populations of more than 50 bird species are diminishing rapidly in our country with some even on the verge of extinction. The sharp decline in the numbers of several species indicates the increasing debilitation of our ecosystem. This will have disastrous consequences for the environment.

Rapid urbanization, use of modern technology and rising levels of pollution have aggravated the situation. Apart from these, ignorance and the failure to adopt necessary conservation measures are also responsible for the decline. While people could earlier see birds everywhere, they are increasingly becoming a rare sight. It is the future generations who will end up suffering the consequences of this loss. The only way to resolve the problem would be for the government to undertake long-term conservation projects. But it must be remembered that the success of such programmes would depend on proper implementation.

Sir — The decline in India’s bird population revealed by the report, State of India’s Birds 2020, resonates with the real-life experience in residential neighbourhoods. The findings, based on the assessment of 867 avian species, show that over 100 of them are declining owing to loss of habit, environmental pollution, collision with electricity lines, poaching for meat and trapping for the pet trade, among other factors.

It is good to know that Indian peafowls, house sparrows, rose-ringed parakeets and the common tailorbirds are increasing or are stable in number. But this does not make up for the overall decline in bird population. Some of the most affected species include raptors, Richard’s pipit, Indian vulture, large-billed leaf warbler, among many others. Of these, a few are native to the subcontinent.

It is worrying that the Western Ghats, a biodiversity hotspot, has lost 75 per cent of its bird population since the turn of the millennium. The carcasses of over 18,000 migratory birds like plovers, shovelers, teals and mallards found last year in the Sambhar Lake in Rajasthan attest to the human failure to protect these winged visitors. A healthy avifauna is an indicator of a healthy environment. The great variety of birds is a testament to the beauty of nature. As those occupying the highest rung in the evolutionary pyramid, it is the duty of human beings to ensure the survival of other creatures.

Sir — It is unfortunate that humans are the main culprits behind the rapid decline in the avian population in India. Although laws dealing with trafficking, poaching and killing are in place, it is shameful that such practices continue unabated. The notable decline in numbers of great Indian bustards, Bengal floricans, flamingos, amongst others, is cause for alarm. Strict measures to restrict illegal trade in birds are not enough. As long as there is a demand for birds, whether for their body parts or as pets, the situation will not improve.