Crowd versus mob in socio-political history 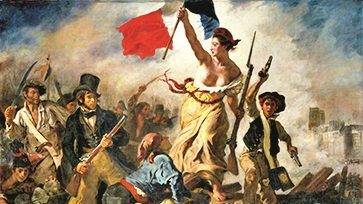 This year, Durga Puja was under judicial scrutiny perhaps because the Calcutta High Court was mindful of the excellent treatise by Charles Mackay titled Extraordinary Popular Delusions and the Madness of Crowds: “Men, it has been well said, think in herds; it will be seen that they go mad in herds, while they only recover their senses slowly, and one by one.” Hujoog, manifest in our collective behaviour during a pandemic, borders on madness. Mackay’s book is a testimony to the fascination with the idea of the madness of crowds.

“The destinies of nations are elaborated at present in the heart of the masses, and no longer in the councils of princes”, wrote Gustave Le Bon in The Crowd: A Study of the Popular Mind. Democracy is mob rule that degenerates into tyranny, if we go by Plato’s account in the Republic. Images of the crowd have corresponded with the notion of the barbaric. They range from the crowd hounding Christ to death, bawling for blood in the Roman circus, lustily cheering public executions. But the crowd can signify change as well: the peasants rising in revolt in 1381, causing disturbances in London; the crowd storming the Bastille in 1789.

One of the goals of the French Revolution was to achieve social and political change on a monumental scale. The Bolshevik Revolution in Russia strove to replace the capitalist grip with communist dictatorship. The echoes of the past resonate in the calls to ‘drain the swamp’ of political elites in Washington, to ‘Occupy Wall Street’ — demanding accountability from banks — to re-empower the middle class as evident in the ‘Yellow Vests’ protests in France, revealing an enduring undercurrent of distrust of the financial and political elites.

Opposed to the vignettes of the crowd as an agent of change are the images of the mob killing people or destroying cultural artefacts and religious symbols. Kar sevaks destroying the Babri Masjid or faceless rioters killing and looting in 1984 (anti-Sikh riots), 1992-93 (Bombay riots), 2002 (Gujarat riots) and 2020 (Delhi riots), to name only a few transgressions.

Not that crowd behaviour is accepted when it marches against ruling juntas. The Chinese government used troops and tanks to crush the Tiananmen Square movement. The Narendra Modi government vilified Muslim women and men protesting against a controversial citizenship law at Shaheen Bagh.

But all the crowd images listed by J.S. McClelland in The Crowd and the Mob: From Plato to Canetti pale in terms of numerical scale when it comes to the gatherings at the Kumbh Mela or the haj in Mecca. Epidemiologists, however, fear that these spectacles are a public health hazard: a cholera outbreak took place during the Kumbh Mela of 1783. Little wonder then that the prime minister has warned against complacency in the fight against Covid-19 during the festive season. But he forgot to warn against election fever: in an election rally in Ramgarh, Bihar, the crowd made light work of the Election Commission’s guidelines on social distancing.

Governments are known to have gone the extra mile to harness the power of the collective. Pakistan and, now, China are baits dangled by the current government to mobilize public opinion. If these fail, there is the time-tested fault line of caste. When all else fails, majoritarianism can always be trusted to turn a crowd into a mob.