POLITICS AND PLAY | Cricketing memories of 1971 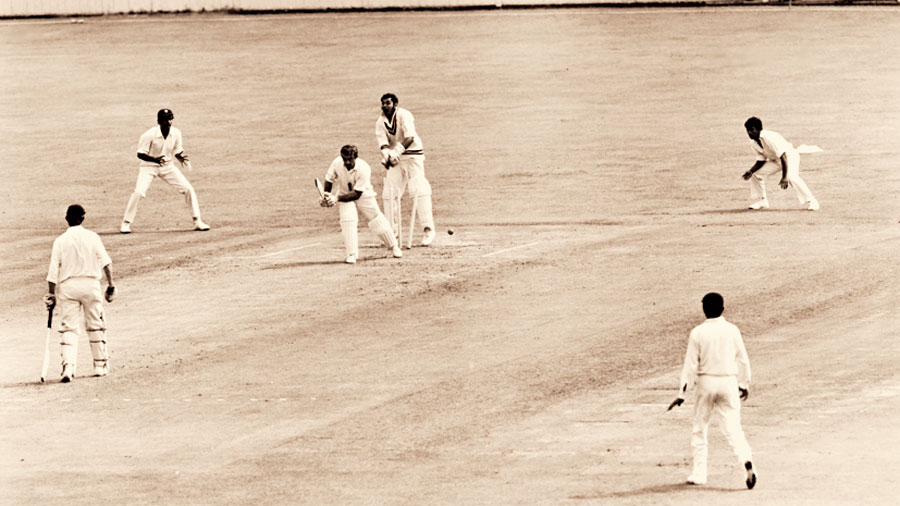 Farokh Engineer looks on from behind the stumps as John Edrich is bowled out for a duck by B.S. Chandrasekhar during the third Test of the series at the Kennington Oval, London, August 24, 1971.
Getty Images
Ramachandra Guha   |   Published 28.08.21, 12:09 AM

The city outside India I know best is London, and the place in London I know best is the British Library, where, for 30 years and counting, I have scoured the capacious collections pertaining to the history of colonial India. I must have worked there for at least a thousand days all told, always following the same routine, which is to deposit my belongings in a locker in the basement before showing my membership card and proceeding to the reading room four floors above, to consult the records of what in imperial times was known as the India Office.

The British Library’s lockers require one to have a four-digit numerical code to open and close them. Most of us, when asked to choose a code of this sort, seize upon the year of our birth, or the year of our marriage, or the year in which one or the other of our parents was born. In all these years of working at the BL, I have always used the same set of numbers: 1971. I was 13 in the year 1971, and my marriage lay 13 years in the future. But it is not for such contrived symmetry that I chose those numbers for my locker. Rather, 1971 was the year when, in a cricketing sense, we one-time subjects of the raj struck back most forcefully at our former colonial masters. For a cricket fan doing historical research on the underside of the Empire, this set of digits uniquely captured the combination of my profession and my passion.

A few days ago, we marked the 50th anniversary of India’s first Test series victory in England. I’ll come to that event presently, but let us remind ourselves that earlier in 1971 India had won a series in the West Indies for the first time. That, too, was a notable achievement. For on the last occasion we had toured the Caribbean, in 1962, we lost all five Tests. Nine years later, of the great West Indians who had previously humiliated us, some had retired and others were ageing. However, Garry Sobers was still their captain, and he had magnificent cricketers like Kanhai, Lloyd and Gibbs playing alongside him. No one gave India the remotest chance of defeating the West Indies at home. And yet we did, winning one Test and drawing the other four.

The series in the West Indies was played between February and April 1971. I was then in boarding school in Dehradun. I read about the Tests in the sports pages of The Times of India, via the daily reports of K.N. Prabhu, a fine writer who combined a lyrical style with a deep knowledge of the game. My dormitory got one newspaper for its hundred or so residents; this was the dak edition of The Times of India. After lunch, when classes were done for the day and the games period was still an hour away, and while my mates were chatting or gossiping or playing pranks on one another, I would sit on a bench with the newspaper and read Prabhu’s elaborately crafted accounts of how wickets were taken and innings nurtured and partnerships created.

The matches in the West Indies started, as they do now, at about 7.30 pm Indian time. The Delhi edition of the next morning’s paper probably carried a lunch-time report; but the dak edition, dispatched hours before, did not even do that. So I was reading about each day’s play two full days later. The delay added to the enchantment as well as to my appreciation of K.N. Prabhu’s leisurely and expansive narrative.

The present generation is accustomed to instant gratification, to watching everything live. I am grateful that I grew up when I did. I think my admiration for the batsmanship of Gavaskar and Sardesai, and for the bowling of Bedi, Prasanna, and Venkataraghavan, and for what Wadekar’s team collectively did in the West Indies 50 years ago, may not have been as deep and enduring had I watched it all unfold before me on a screen.

Although Wadekar’s side won in the West Indies in the spring, they were distinct underdogs when they toured England that summer. In 40 years of trying we still hadn’t won a Test in that country. On our last two tours, in 1959 and 1967 respectively, we had lost all the Tests we played. Besides, while Garry Sobers and his side were noticeably on the decline, England under Ray Illingworth were acknowledged to be the best team in the world. The previous winter, they had comfortably beaten a strong Australian side Down Under.

By the time the England series started, the summer holidays had begun. It was at home, on the radio, that I caught the tail end of the England-Pakistan series, and it was at home, on the radio, that I heard every ball of the first Test between England and India, played at Lord’s. It was a gripping contest, hard-fought all the way. Chasing a target of 183 in the fourth innings, India were, at one stage, 100 for 3, but then wickets started falling rapidly. With about an hour till stumps, the skies opened and the match was declared drawn. At this stage India needed about 40 runs to win, but they had only two wickets in hand.

I also listened to much of the second Test, played at Manchester, at home on the radio. This time India were comprehensively outplayed, and saved by rain. By the time the third Test at The Oval commenced, school had started, and I was back in my dormitory. There was one radio, access to which was restricted to members of the senior form alone. They listened to it in the evenings, until the mandatory lights-out at 10 pm, while us benighted juniors were supposed to be studying in our cubicles. Happily, our house captain, Vivek Bammi, was kind enough to come with periodic bulletins for the rest of us. It was thus that one night, shortly before we were all commanded to go to bed, that Bammi walked to where I sat, offering this latest and most dramatic update: “England 101 all out. Chandrasekhar 6 for 38!”

Fifty years later — almost to the day since I heard my house captain utter those words — this remains one of my most cherished cricketing moments. I have since seen, countless times, the replays of all the wickets Chandra took on that magic English afternoon: the yorking of Edrich, the artful caught-and-bowleds to dismiss Illingworth as well as Snow, the trapping of the last man, John Price, leg-before-wicket, the snaffling of Fletcher by Solkar in the leg-trap, and — my own personal favourite — the magnificent catch taken at slip by Venkat to a Luckhurst slash. I enjoy seeing these dismissals, one by one, as captured by the grainy footage of the time, but nothing can ever compare with how I learned about B.S. Chandrasekhar’s act of collective demolition in the first place.

There are no cricketers like those seen through 12-year-old eyes, wrote Ian Peebles once — or those read about by 12-year-old eyes either. I myself turned 13 in the last week of April 1971, shortly after the series in the West Indies ended. I was still a 12-year-old at heart when we won in England. And when remembering or writing about those two series, I suppose I must be a 12-year-old still.

There is an India-England Test series on as I write. Even if India wins the series, I somehow doubt whether the digits ‘2021’ will ever evoke lasting feelings of attachment in the teenage cricket fan of today. The obsession with the Indian Premier League has something to do with this; besides, our side wins Test series so often now that no particular victory can be truly significant. On the other hand, for cricket fans of my generation, the numbers ‘1971’ shall always be special, sacred even. For it was in that year that we won series in the West Indies and England for the first time.

Among the reasons I want the pandemic to end is to once more enter the British Library, to proudly punch in those four numbers in the basement’s lockers, before going to examine the files in the reading room upstairs. I see that act as both protest and affirmation, as a critique of colonial rule and a celebration of what our cricketers did in 1971 to lay its ghosts to rest.