An epidemic of mediocrity and violence 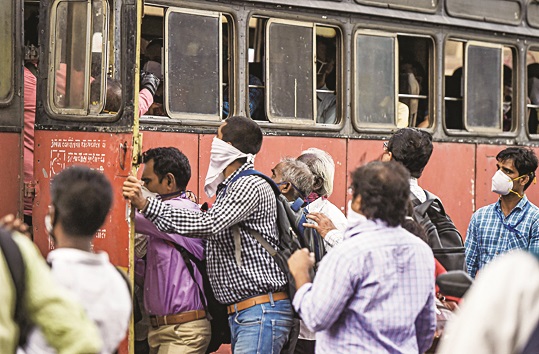 Epidemics like the coronavirus confine and cage you in a little flat. That is when you are grateful for the telephone. In sheer desperation, you revive a circle of friends and acquaintances, old and new, the adda is reinvented again. During these discussions, one of my friends asked me, “Why do men always act as if policy, management, and technocracy are extensions of the male imagination? They pretend that control and decision-making are acts of machismo rather than courage. You reify the male imagination and refuse any place for ignorance, anxiety, and helplessness. This is why the virus made idiots of you and your pretensions.”

I realized that what she said was true, and that many of us act as if we are surrogate policymakers. By overemphasizing the solution, we lose the sense of the narrative, even the reflexivity of the narrative. We forget our sense of storytelling. In fact, I was asked recently, “Can you talk without mentioning the word policy and discuss the lessons of the coronavirus?” This essay is a halfway house to the lessons of the coronavirus, and I shall try to tell a story outside the policy box.

Fumbling a bit in the beginning, I realized it opens me out to a whole collective subconscious that the unstated, silenced create a different perspective. Psychology, in fact, provided the first unfolding. A crisis is supposed to change perspectives, but the coronavirus dared every stereotype and fear of the collective imagination.

We showed that we have lost the sense of nature as a part of life, displaying a complete lack of sense of the virus as a form of life. One wishes that there was a temple for the virus, the way we have for Shitala, the goddess of smallpox. Secondly, all the special hierarchies became visible. Gender violence became amplified to the form of caricature. One had to almost conclude that the Indian family thrives when husband and wife spend time apart. Old age, far from being a niche of respect, has become a site for vulnerability. As a democracy, we revealed in true Orwellian fashion that “some are more equal than others”. We proved that the migrant who drives our economy is less of a citizen than a refugee. He/she fits the definition of dirt by the British anthropologist, Mary Douglas, as “matter out of place”, for the migrant became less than human by being out of place, unwanted where he/she was working, unwelcome at the point of origin. Our fears and suspicions combine to create a mob, a herd mentality. Crowds refuse burial to those who have died of Covid-19 and landlords harass doctors and nurses by refusing them residence. An indiscrete cascade of coughs is enough to get you lynched on the street. To all this, we add the communal blight which, in a way, creates the final statement of the catastrophe.

Sadly, we have ignored the narratives of the social, freezing ourselves into a pretentious costume of the nation state. We present virus statistics as if they are inverted replicas of production statistics, and pretend that the coronavirus lockdown is an Olympics of control where we are almost in the bronze-medal category. All this idiocy is caught in the literal lockdown of language into a stilted vocabulary of control, graph, body count and time-tables without any sense of care or compassion. It is almost as if the sensitivity of touch, the sensibility of the hands, was lost as we greeted the epidemic with forceps. We literally distanced our perspectives, our ways of reading the disease. The alienation was obvious. One hears so little about compassion and care that one longs for Mother Teresa to reinvent herself to face the coronavirus and confront the hunger, the indifference and the loneliness it created. The sense of community stands vitiated, compounding the pompous illiteracy of the State playing with numbers in a way that would even embarrass the astrologers.

If our sense of stereotypes was blatant, our illiteracy about science was equally obvious. Our sense of science was textbook Newtonion. We flaunted it as a catechism, rather than as a lived reality. We read science as technique or method, which guaranteed a condition rather than a heuristic of understanding. The initial entry of the virus inspired articles on the scientific temper without any sense of context or genealogy of the actual debate. Words and concepts like complexity, uncertainty, testing fell on deaf ears. Also, we should stop treating science as an abstract entity and look at each science in its own particular unfolding.

Viewed in this way, psychology is the first casualty. In the process of understanding the nature of anxiety, it has become reduced to a technique of control. What we see is a blending of management, psychology and spirituality to create a new technology, to create a new technocracy of certainty against fear and anxiety. As a result, we do not look at the roots of the problem but are content between the palliative and the placebo. Our new science is an amalgam of catechism and the handbook. We create two attitudes to science. In the first, we create iatrogeny, which is expert-induced illness that scholars like Ivan Illich have analysed. Secondly, we create science as a wish-list and make our own recommendations. The result is a sheer disaster. Economics, too, is a subject in deep crisis. It has no sense of the informal economy, no theory of nature beyond its commoditization. Narendra Modi fetishizes economics, but a crisis like this should have opened a paradigm to questioning. Sadly, our expertise, like our stereotypes, lies frozen. As a result, there is no paradigmatic crisis. All we see is a forced return to normalcy catering to the corporation and the bureaucracy. The return to normalcy is a mark of the competence by the regime, while science provides it its certificates.

As a result, we ignore two critical issues. Firstly, we focus so much on science and scienticization that we ignore the everydayness of coping. Coping is a set of recipes, hunches, norms, techniques we use to intuitively manage in a successful society or during a disaster situation. It has been banalized as jugaad by many management experts looking for ideas of innovation. Coping is literally muddling through, managing at the bare minimum, when the cupboard of emotions and materiality is empty. Coping is what the housewife, the migrant, the worker in an informal economy do. It is a way of surviving on very little based on past wisdom of improvisation. It was the ethnography of coping, the courage and desperation that we have ignored. Editorially, we talk science, but science for most of us is a costume ball. Coping provides us with a compass of everyday knowledge with which the margins survive. If society relies on coping, our State has literally ‘muddled through’ at a great cost. It acts as if it has pulled off a scientific trick better than most nations, but it has no lenses for evaluating the suffering and violence it has caused. It has been celebrating a return to normalcy when we are facing a crisis of paradigms. This crisis is at three levels — democratic, scientific, and civilizational. India is too Victorian in its science, ignorant about the ideas of uncertainty, complexity, with no sense of the epistemic crisis of science, often confusing science and technology. The current illiteracy around science and its sense of nature is devastating.

Secondly, we are consolidating our sense of authoritarianism through elections, the Citizenship (Amendment) Act, and not through science as a surveillance system. With the consolidation of the State as an enclosure, normalcy is the last thing the State can afford to speak of. Simultaneously, the ideas of citizenship have lost the protective hallo and the person feels more vulnerable than before. What we are facing is not just a failure of globalization but also a breakdown of a civilization and its visions of decency and care, its sense of values or what is human. A Tagore or a Gandhi or a Dalai Lama would’ve put it better; as a writer, one is a mere time crier of their dreams as India lapses into an epidemic of mediocrity and violence.