The lockdown forced by Covid-19 compelled millions to withdraw from the outdoors, enabling nature to make a comeback 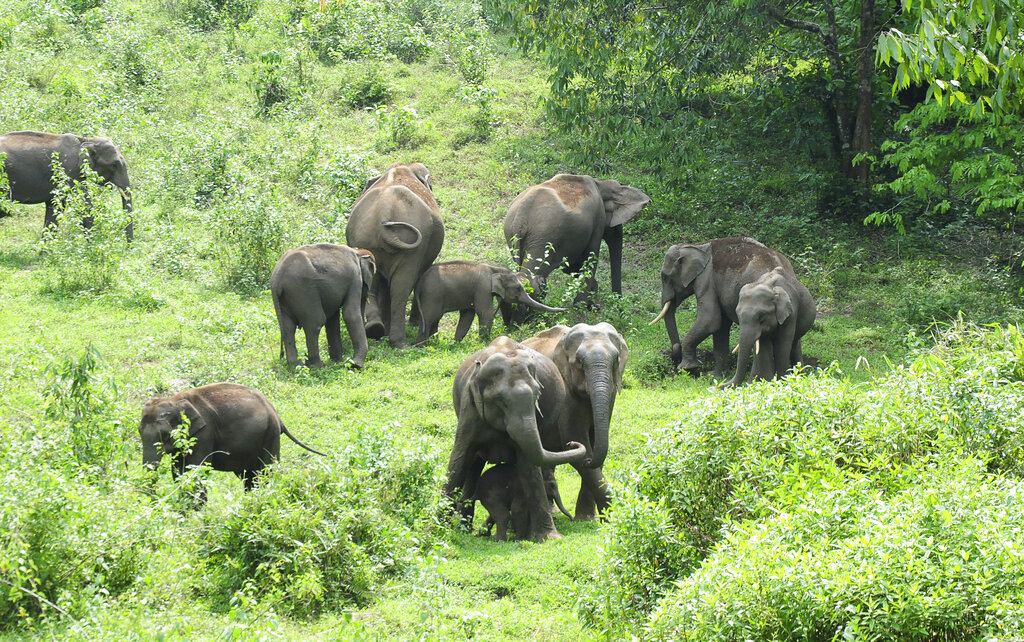 In this Thursday, April 23 photo, a herd of wild elephants graze near a road in Malakkappara, Thrissur district, in the southern Indian state of Kerala. Vehicular traffic through this road has almost ceased because of the ongoing lockdown and wild elephants have appeared close to human habitat.
(AP Photo/Anup K. Venu)
Jayanta Basu   |     |   Published 27.04.20, 08:46 PM

The dreaded coronavirus has forced scientists to race against time to find a vaccine. Ironically, the pandemic may turn out to be the vaccine the world has been waiting for to counter a greater disaster in waiting: climate change.

The lockdown forced by Covid-19 compelled millions to withdraw from the outdoors, enabling nature to make a comeback. Photographs of Nilgai on an empty Noida road or deer dotting neighbourhoods trended on social media. Birds, too, were spotted this spring. The air became cleaner — Calcutta’s air pollution plummeted by about 50 per cent or more — and haze vanished in haste. All of a sudden, one could see the stars in an urban night sky.

But the claim of nature being replenished by the lockdown is misplaced. Human beings are integral to the environmental system. The question is whether the world would learn from the coronavirus catastrophe and prioritize action on climate change? Or would the costs of the pandemic — a recession is expected to hit the global economy — be used as a pretext for not acting against the impacts of climate change?

The initial indications are hardly inspiring. Thrown on the mat by the coronavirus carnage, the United States of America signalled that industries do not have to bother about complying with green laws in the wake of the crisis. The United States Environment Protection Agency made it clear that it would not penalize erring companies because the fight against Covid-19 had made it difficult for them to abide by the norms and, simultaneously, protect the interests of the people. This could well be the future model for a number of developing countries.

If one were to look at climate negotiations, it would become apparent that several countries led by the US have consistently shifted the goal posts on meaningful interventions. The core issues in climate change negotiation are limited; which country will cut emissions by how much and by when; from where would the money to compensate climate change-induced damages of the past and the future materialize; the availability of the technology required to balance development needs and emission surges in developing and under-developed worlds; the de-carbonization of key sectors. Ever since the Copenhagen climate summit in 2009 in which the developed world was severely reprimanded, the first world has been trying to bulldoze a biased agreement. In subsequent summits, developed countries started debating issues of little relevance, digging up new and unexpected hurdles and diverting time from negotiations on critical issues. As a result, almost every conference of parties ends with a compromised draft and little progress on the ground, with a window kept open for re-initiating bargaining in the future. The Paris summit in 2015 was an exception where a legally binding agreement could be stitched and, later, ratified because of the initiative taken mainly by the developing and under-developed countries as well as by a few developed economies. In Madrid, the whole world was eagerly awaiting to see how global leaders would respond to repeated pleas from scientists that the cumulative global emission needs to be cut rapidly and sharply to save the world from disaster. Suddenly, the negotiations were hijacked by an imbroglio involving the carbon markets set up under the Kyoto regime versus the one that will be set into motion by the Paris agreement. Unsurprisingly, the deliberations ended in disappointment.

The global response to the coronavirus pandemic has taught us that the world can act differently and decisively. Millions of dollars were spent to fight the contagion and appropriate actions rolled out on ground. These are exactly the kind of measures that are needed to combat climate change. If global leaders do not consider the pandemic as the final wake up call, the world is certainly headed towards its doomsday.