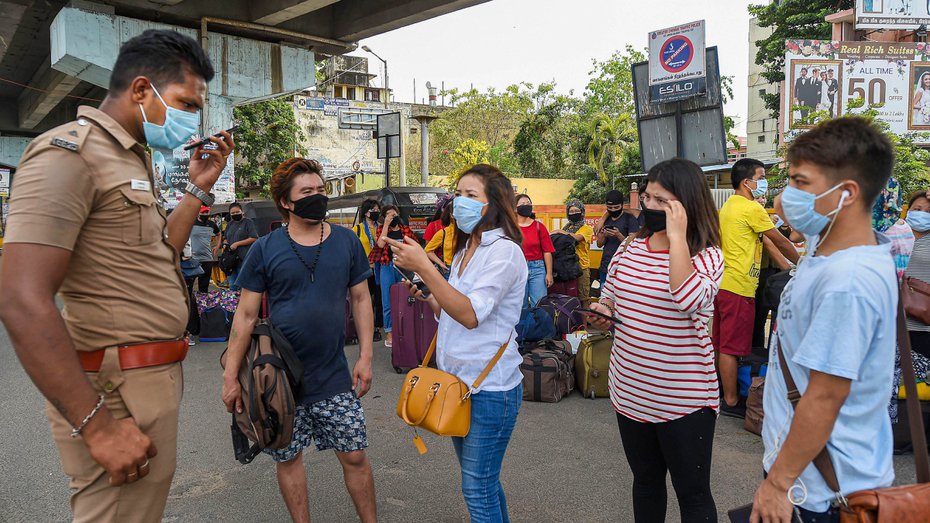 A policeman interacts with migrant workers from Manipur as they walk along the Poonamallee High Road to reach Chennai Central Railway station for going to their homes, amid ongoing Covid-19 lockdown in Chennai.
PTI
Aditya Sharma   |     |   Published 03.06.20, 09:36 PM

The late Jonathan Mann, the WHO administrator who pioneered the global campaign against AIDS in the 1980s, had envisioned a future where public health, human rights and ethics would be seen as complementary fields motivated by the principal value of well-being. He may have been impressed by Indians clapping and lighting oil lamps and the armed forces conducting aerial fly-pasts in public displays of support for the ‘corona warriors’ who are fighting to protect citizens against a contagion.

Several weeks of lockdown have proved that the promise of providing good health can be very challenging. Significantly, human rights defenders have been among those who have faced the brunt of the ire of the State; they have been arbitrarily detained, arrested and sent to jail. Such an approach strikes at the very root of the concept of well-being. Health is a human rights issue, while human rights can be perceived as a health issue.

Those campaigning against socio-economic vulnerability have found that the State has turned against them. Take the following cases from the Northeast. Soneswar Narah and Pranab Doley, two Assam-based farmers’ rights defenders, were arrested after they complained against officials for siphoning off 800 quintals of rice meant for public distribution. They were sent to four days of police custody in a case pending from 2018. The activists, Takhenchangbam Shadishkanta and Khangjrakpam Phajaton Mangang, were jailed in Manipur for expressing concern over the government’s choice of location — a paddy field — for a quarantine centre. They had suggested that an unused airstrip could be an alternative. Shadishkanta and Mangang were charged under the Disaster Management Act, 2005 for their defence of the rights of indigenous persons and their livelihood. Does access to food and livelihood not contribute to well-being? In the absence of an ethical framework on public health, India’s criminal justice system has disregarded national and international calls on ensuring the health of prisoners and police in exceptional situations. Are they not entitled to safety and protection during a pandemic?

The imbalance among ethics, human rights and public health has become more prominent even as social disparity takes visible forms. The visuals of migrant labourers fleeing in thousands and Tablighi Jamaat attendees cramped in a building will haunt India equally. The alarming rise in infections and deaths from the coronavirus reflects a worrying institutional inadequacy. Yet, defenders of public health, who have been critical of the institutional response to the crisis, continue to face action. Two persons were arrested in Madurai, while a government official in Arunachal Pradesh invited disciplinary action for criticizing on social media the prime minister’s inability to contain the virus. The media, defenders against a pandemic and an infodemic, have also been confronted with examinations of the freedom of expression.

In the absence of protocols or an ethical framework, doctors and essential service providers — they have been publicly thanked twice for their services — have been subjected to humiliation and assault. Guidelines to assist the police in implementing the lockdown from a human rights approach may have been the need of the hour. Reports of discrimination against citizens from the Northeast — they were racially profiled, spat upon, called ‘Chinese’ or ‘Corona’ and denied entry into grocery stores — underline the need for such regulations. Similar incidents of hate crime targeting people with Chinese roots have been reported from the United States of America, Europe and parts of Asia.

Mann and his ideas have been let down, once again — this time over a novel virus. Our failure in this respect must help us prepare for the next crisis. Establishing an ethical paradigm for public health with human rights at its core must be accorded a priority. Global health lawyers like Lawrence O. Gostin are advocating such a principle. But the world — busy fighting its own battles — is not listening.