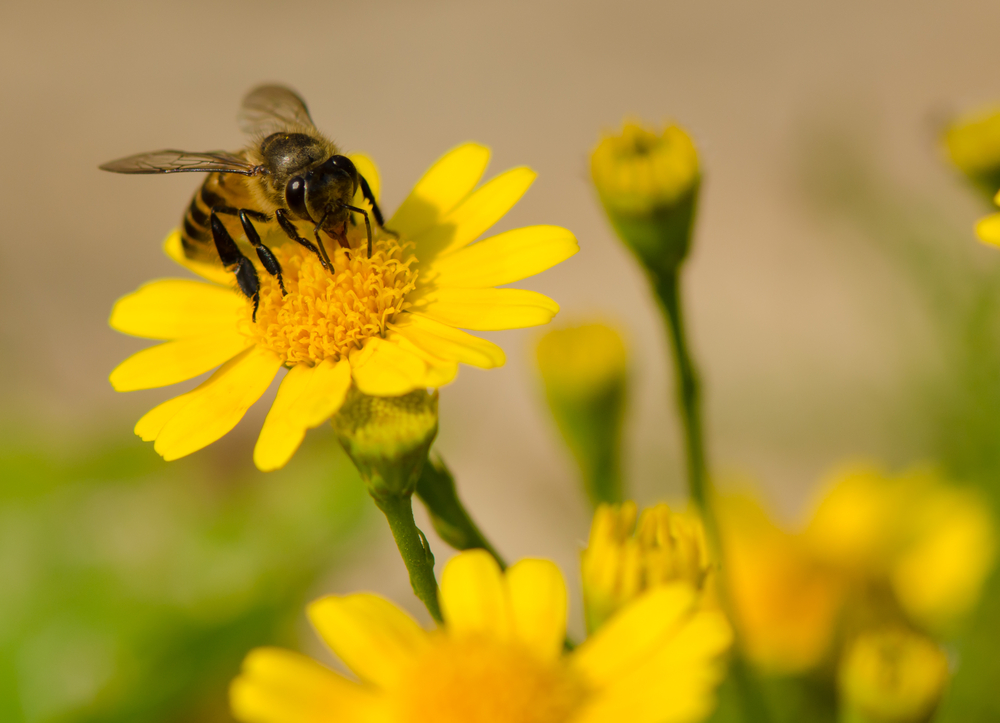 It was heartening to read that on account of the lockdown, populations of bees and rare wildflowers might recover, given that many roadside verges are being left uncut.
Shuterstock
The Telegraph   |     |   Published 11.04.20, 09:20 PM

Sir — In the midst of all the gloom-inducing news surrounding the global death toll in the coronavirus pandemic — the figures have crossed 1,01,000 — there was a sliver of good news. It was heartening to read that on account of the lockdown, populations of bees and rare wildflowers might recover, given that many roadside verges are being left uncut. It is no secret that bees are important for the balance of the ecosystem — they play significant roles in pollination and crop production. As usual, on account of human excesses, bee numbers have dwindled alarmingly. Why must it take a calamity of such proportions for human beings to understand the need to protect biodiversity?

Sir — In the middle of the global Covid-19 pandemic, the step taken by the Bollywood superstar, Shah Rukh Khan, and his wife, Gauri Khan, to bolster efforts to prevent the spread of the disease is praiseworthy. They have offered their four-storey office building to the Brihanmumbai Municipal Corporation for use as a quarantine facility. They also donated a large sum of money to the chief minister’s relief fund in Maharashtra. Khan’s efforts will benefit West Bengal as well — the actor’s Indian Premier League team, the Kolkata Knight Riders, and his Meer Foundation have pledged to collaborate with the West Bengal and Maharashtra governments to provide 50,000 personal protective equipment kits to healthcare providers. The Meer Foundation will also provide essential items and groceries to over 2,500 daily wage labourer across Delhi.

The Khans’s actions will hopefully spur other wealthy celebrities to dedicate at least some of their resources towards the betterment of the country at a time when it is reeling under the effects of the coronavirus. This is their opportunity to serve the nation. In such a critical situation, all Indians should be ready to help their fellow citizens. We should provide food and shelter to the poor and the needy. We should also inspire and encourage each other to maintain social distance and stay at home during the nationwide lockdown. There is no other way to prevent the spread of this disease.

Sir — At a time when his peers in the Hindi film industry are busy uploading ‘tutorial’ videos about how to wash dishes or work out, Shah Rukh Khan has actively put his immense resources to use in order to help India combat the coronavirus pandemic. Not only has he offered his office premises to the BMC as a quarantine facility, but he has also pledged to provide 50,000 PPE kits to Bengal and Maharashtra. This ought to make the Centre hang its head in shame; in spite of the prime minister’s newly-instituted PM-CARES fund getting several thousand crores in donations, the Centre has, according to the Bengal chief minister, sent the state only 3,000 PPEs. This is, perhaps, not surprising; the Trinamul Congress, which is in power in Bengal, is open in its opposition to the Bharatiya Janata Party, which rules the Centre.

It is shameful if political rivalries are allowed to overshadow the interests of citizens at such a critical point in the nation’s history. While Khan is doing what anyone with the means ought to do during a moment of crisis, his generosity stands out because of the suspiciously lackadaisical approach of the government, whose job it really is to provide equipment to healthcare workers.

Sir — Although it was inevitable in the middle of a pandemic, the cancellation of Wimbledon on account of the Covid-19 outbreak is still heartbreaking. It is the most prestigious of all the Grand Slam tournaments (“Break from tradition”, April 3). This year might have been the last time that the greats of the game of tennis, Roger Federer and Serena Williams, played the grass court Grand Slam. However, the seriousness of the pandemic had an impact even on a tournament as large as the Tokyo Olympics; Wimbledon, in comparison is conducted on a much smaller scale.