A Truth Commission for the Northeast 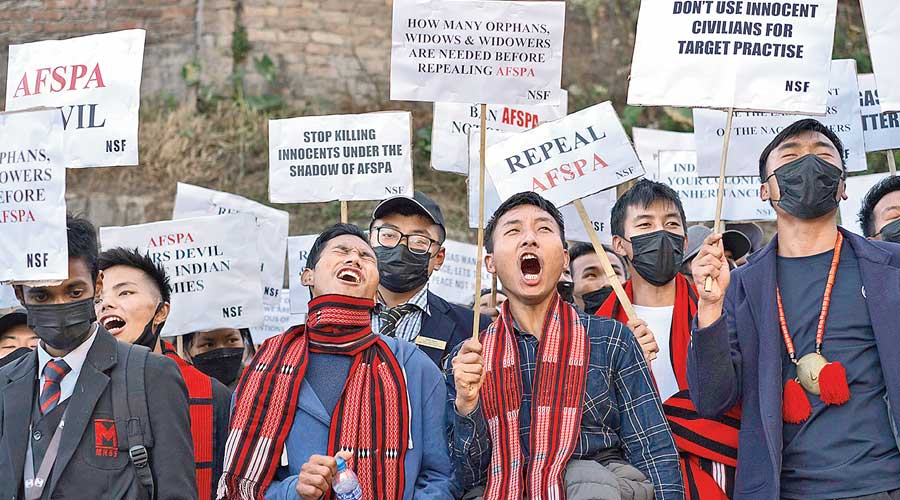 This essay is a letter to my fellow Indians. It’s a prayer, a plea, a proposal for a project, a moral experiment. It was triggered by the emptiness of Independence Day, when a majoritarian, mediocre India confronted the vacuity of its political self. These feelings increased upon reading reports on December 4 of the massacre of several civilians in Nagaland. They were waiting at a bus stop when they were killed by the army, which mistook them for insurgents.

My anger and shame, my guilt at being a silent Indian, increased as one heard Ajit Doval, the national security adviser, claim that our security is being threatened by the anarchy of civil society. Doval performed an imperious inversion, making the idea of security sacrosanct and treating civil society as suspect. The nation state’s sense of the genocidally surreal becomes obvious in defence issues. Our majoritarianism makes even citizenship a questionable ritual. In an Orwellian sense, it permits some citizens to annihilate others with impunity.

The uneasiness increased when one heard about the reports of religious savants talk of ethnic cleansing. The essence of this was caught in a brilliant cartoon where Hindutva hardliners suspect a new swamiji. One looks and finds Swami Vivekananda at the parliament of religions, announcing that all religions are equal. The difference between Narendra Modi’s Hindutva and Vivekananda’s Hinduism is stark. The average Indian watched all this with either anxiety or a helplessness that shrank to indifference.

All this led to a set of disturbing questions. Has the Indian nation state lost its civilizational sense of conscience? Is citizenship in India a flawed civics without the rituals of dissent? Why is it that memories of events from the Gujarat riots to Unnao get sanitized into a primordial acclaim by majoritarian logic? All this leads to the question of how civil society, fragile and potentially ‘antinational’, can save the idea of India. What experiments can be performed that can help recreate an ethical sense of democracy? One senses that the India of our dreams has shrunk after the decades of the 1990s. One senses the banality of evil around the nation state as a mode of violence.

It was at this time that another event occurred that triggered new thoughts and possibilities. Desmond Tutu died, and one asked, in the very act of mourning, can one create a Truth Commission in India? Can one face up to the murder of innocent Nagas, mourn and create a different civics of peace? How does one confront the Armed Forces (Special Powers) Act? The answer has to be at the level of ordinariness and the everyday and not just that of an isolated exemplar like Irom Sharmila.

I realized that the Truth Commission is more than a children’s crusade, even though Greta Thunberg has shown that even the latter has political power. I sensed the complexity of the Truth Commission as a moral drama and realized that it required the genius of Tutu-Mandela to invent it. Many scholars, driven by the logic of Anglo-Saxon law, dismissed it as primitive sentimentalism, lacking the realism of law. The general tone echoed the Jewish claim that forgiving a Nazi is not possible. To do so, they say, pollutes the fight for justice. But one has to allow for miracles to happen in India. India may not have a genius like Tutu currently, but civil society must rise to the occasion so that every citizen becomes a Tutu.

How does one begin? Simply with an act of mourning, a ritual of listening. Listening is the first act of ethical repair, a survivor’s need. To listen is to create an I-thou relationship with the victim. To listen is also to reread Ajit Doval claiming that security is a substitute for conscience. One has to begin by questioning the officialdom of words like security, patriotism and border, which the nation state has made narrowly sacrosanct. At that moment, one senses that a Truth Commission for the Northeast can ethically repair India.

As an act of memory, mourning and prayer, one can read the issue of the journal, Outlook, reporting on the killing. It has a beautiful prelude of poems by Temsula Ao. Let us invite our poets and storytellers to recite and repeat the infinity of similar events. The storyteller returns to revive a sense of conscience. Realizing it is a tentative exercise, one invites civil society, universities, non-government organizations to examine whether India can create a humus of new concepts to sustain democracy. What is the equivalent of ubuntu? Is it not the multiple epic tradition of 300 Ramayanas, a way of breaking the monologic nature of official truth?

Civil society must have the courage and the moral luck to find ethical professionals to interrogate the State. One needs the help of the Right to Information group, the Paxlumina network for reconciliation, and the homegrown wisdom of WISCOMP to help us. The ideas of mediation that Sriram Panchu and Sri Sri Ravi Shankar tried in Ayodhya need to be reworked. Can we create a thousand panchayats of citizens open to discussion, inviting each village and town to tell its narratives of violence? India, at this moment, is not just challenging the concept of security but confronting the very idea of a post-truth society. Such a network of conscience can create a new civics of responsibility. Witness and testimony — the political confession — acquire a new poignancy in this context. Truth now becomes a companion to democracy as both begin the pilgrimage toward forgiveness. We need the help of journalists and historians to help create what might be the biggest oral history project in the world. Civil society becomes a trustee of memory and the political and the ethical combine in a way that Gandhi dreamt of.

As a thousand panchayats bloom, intellectuals and housewives must create a new harikatha of stories. The Truth Commission would then become a story of satyagraha on behalf of the new India of our dreams.

Professional groups from law, ecology, religion, and politics must gather and play research assistants to civil society. One needs to invite the perpetrators to defend themselves. One should request the likes of Doval, the officers responsible, and the young soldiers present to tell their story while the intelligence wing analyses its ‘mistake’. In this very act, India begins reinventing democracy. Each newspaper provides a space for such narratives. The stories can go online, but the power of the oral has to be sustained.

Through the mechanism of the Truth Commission, democracy needs to desperately cross-examine those in power, especially when they hide behind the pretence of responsibility. The citizen as idiot spectator has to stop being a consumer of violence. One would also need to find scholars, professionals, housewives and students to get together not around an act of ideology but through a commons of conscience. Once the vision is understood, civil society can summon experts to work out the details. One has to realize that the mediocrity of our time is both ethical and intellectual. It is time for the soul of democracy to invent new rituals realizing that an indifferent India can no longer be a civilizational India.