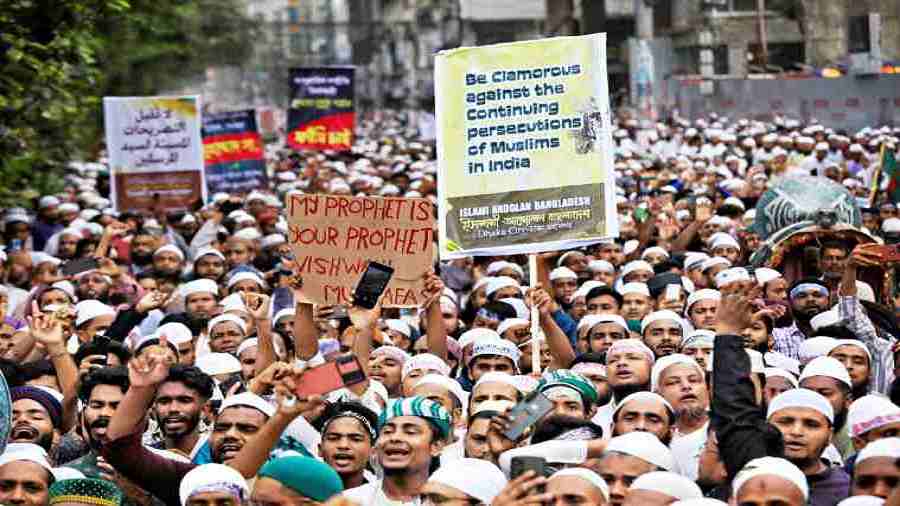 It was my younger grandson’s  annaprasan  the other day. We adults celebrated it while he, poor babe, had no comprehension of what was happening in his name. It’s the same with all these rice ceremonies — his elder brother’s four years ago, their father’s more than four decades ago, and mine in the dark ages of another century. Were these events religious or social? Krishna Hutheesing faced a similar quandary on her first visit to the young Soviet Union when a Muscovite remarked that if her bindi was religious, it indicated superstition; if a beauty spot, it suggested vanity. Communists disapproved of both.

Today’s Russians may have outgrown such hang-ups but the most innocent explanation of Indian ambivalence is the difficulty of disentangling the social from the religious. This may be one reason why this country will never be secular in the Western sense although not many non-Hindus will give Hindus the benefit of the doubt. Syed Shahabuddin, who was no fire-eating Asaduddin Owaisi, used to complain that cracking a coconut to launch a ship or lighting a lamp to inaugurate an exhibition betrayed official secularism. For many Hindus, however, they are only everyday rites without sectarian overtones that have been sanctified into rituals over the ages as the only way of investing them with coercive force. The Bengali interdict on eating hilsa between Vijaya Dashami and Saraswati Puja — the fish’s breeding season — is a classic example. As a result of many such dos and don’ts, Hindu life may seem to be hedged in with Brahmanical sanctions that make outsiders of all others.

Inevitably, this perception of the majority encourages minority assertiveness in a land where the two communities have been traditional contestants for power. That, in turn, generates — or is supposed to generate for dissimulation cannot ever be ruled out — what is fashionably called majority victimhood. Perhaps Jawaharlal Nehru simplified a complex interaction by transposing Jean-Paul Sartre’s thesis of France’s Jewish problem being really a Gentile one to Hindu-Muslim relations, but he was not far out in holding that the real peril India faces is majority communalism. Had Nehru’s successors shared his wisdom and genuinely regretted the Gyanvapi mosque controversy, they would have iterated the rights enshrined in Articles 25 and 30 of the Constitution  far more strongly and firmly repudiated the likes of Nupur Sharma and Naveen Jindal before the likely material consequences of global Islamic wrath forced them to eat humble pie. Now, the government of a nation that constantly boasts of being the largest democracy on earth stands disgraced before the world for falling on its knees in abject surrender as soon as it faced the multiple threats of dwindling exports to the Persian Gulf and diminished oil and cash remittances from the region.

This public humiliation has nothing to do with communication skills or diplomatic finesse. Even less does it convey any consideration for fellow Indians. It exposes the rottenness at the core of a party whose opportunistic and unprincipled leaders don’t give a jot for the sensitivities of Indian Muslims and only respond to the fear of retaliation from abroad. The elderly Sikh who lamented to me after Operation Blue Star that his community was suffering because it had no foreign champions may rightly have gauged the calibre of our ruling elite.

Homilies won’t change human nature. But repeated reiteration of the national commitment to ethnic and cultural pluralism might ensure that the ruling party doesn’t again dare to forget the consequences of playing fast and loose with demographic reality. We will never attain the ideal of the melting pot that is the much-maligned United States of America: in Peril, an account of the latest Washington conundrum, Bob Woodward and Robert Costa unconsciously mention prominent real-life characters called Murthy, Tanden and Basu without bothering to explain the Indian provenance of their surnames. But what sociologists call a “salad bowl” need not be beyond our means. It is, in fact, the least that India needs to survive. The alternative can be a return to the warring anarchy that succeeded the break-up of the Mughal empire.

The answer lies in New Delhi’s hands. The Sharmas and Jindals apart, the Centre alone can stop politicians like Karnataka’s C.N. Ashwath Narayan who reportedly claimed on television that anyone who eats beef is  an outcast or a foreigner, or  Assam’s chief minister, Himanta Biswa Sarma, who vowed to abolish  madrasas. The terrorism of socalled cow vigilantes, the terrorism practised in the name of curbing ‘love jihad’, and the terrorism preached by Dharma Sansads are all instruments of coercion. So is constant harping on the supposedly Hindu origins of more and more Muslim monuments. History can be rewritten through careful appointments to key positions, revising past records, emphasising certain events and personalities and extravagant celebratory architecture so that there is no trace left of the “bara sau saal ki gulami” of which Mr Narendra Modi spoke.

Until that revision is complete, however, we must make the best of the synthesis of many cultures that is our heritage. Raj Narain’s “Drop the tie and wear the loin cloth, otherwise the Indian culture will die” was a reminder that even the nattily folded handkerchief in Mr Modi’s top pocket is an acquired fashion. So are trousers,  churidars  and jodhpurs.  J.B.S. Haldane reminded Nehru that he was jumping sartorially from the frying pan into the fire by discarding British suits for Mughal sherwanis. Botanists know that a vast range of fruits and vegetables, from potatoes to pineapples, chillies to cashew nuts, are also imported. Tomatoes are ‘belayati begun’ to this day. Do we deprive ourselves by banishing them all? And what happens to 204 million Indian Muslims who know no other home save this country?

On Puri beach I once came across a manifestation of the simplistic faith that may have existed before the inroads of modernity created today’s mix. A ditch meandered through the sand outside what was then the BNR Hotel. Its water was stagnant and smelly for some of the town’s effluent probably found its way into it. One day we saw two or three saffron-draped men with matted locks reverentially scooping up the filthy water and slapping it on their heads. Asked why, the leader retorted “Isn’t this Gangamai?” Those men who reflect “the sentiment of society” and “the culture of the people” (phrases that are popular with our demagogues) had been told it was the sacred river transporting the snows of Kailash down to the ocean. Disregarding the credibility of these bulwarks of  Hindutva’s proposed Elysium, a senior Indian official had the nerve the other day to accuse the US of practising vote bank politics in international relations.

My older grandson’s  annaprasan more explicitly evoked worship since it was combined with the groundbreaking for our house in Gurgaon. But since we had no priest and ignored the stars, the occasion didn’t qualify as a puja. His father’s  annaprasan  was more conventional with the baby dressed up like a Bengali groom with a topor — the conical helmet of carved pith that I have since learnt is associated with Shiva — but, again, without priestly intervention. However, no one confused it with a cocktail party even though the fruit punch was laced with vodka. On the contrary, some saw this as a genuflection to the hallowed role of liquor in ancient Hindu ritual; others as a feature of modern Indian cosmopolitanism. Either way, people would ask me appreciatively for many years afterwards about the kick in the drink. Whatever other shortcomings India might suffer from, it has not suffered until now from a closed mind.