Chauri Chaura and a New India 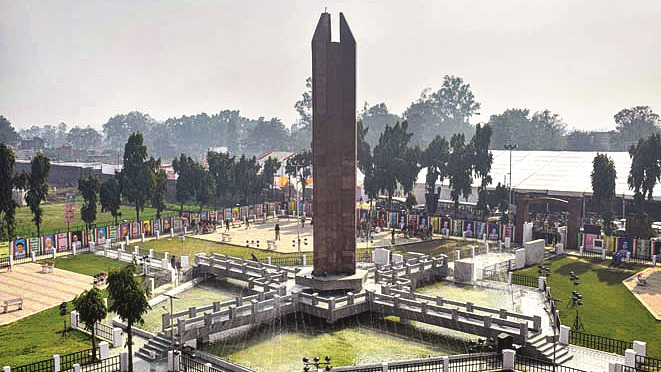 Ninety-nine years ago this month, to the dismay of a significant section of the leadership of the freedom struggle, Mahatma Gandhi called off the Non-Cooperation movement. A Congress resolution passed in Bardoli on February 12, 1922, instructed its workers to stop picketing, start paying taxes, and suspend all forms of mass civil disobedience. The reason for this sudden volte-face was “the inhuman conduct of the mob at Chauri Chaura in having brutally murdered constables and wantonly burned the police thana...”

Two weeks earlier, at Chauri Chaura, outside Gorakhpur, volunteers were picketing the local market, preventing the sale of fish, meat and liquor. Gupteshar Singh, the sub-inspector, had frustrated their attempts, leading to an altercation. A few days later, an enraged crowd gathered, 1,500-2,000 according to a UP government communiqué. They marched to the police station, armed with bamboo clubs, bricks and kankar from the adjoining railway tracks. When the police fired into the air, the protesters assaulted the officers, hurled bricks and kankar at the station and, ultimately, set fire to it. Twenty-one police officers and a little boy, the servant of the sub-inspector, were killed (numbers vary slightly in different accounts). “The kingdom of Mahatmaji has come” was, apparently, the chant ringing in the air in the aftermath of this brutal act.

One hundred and seventy-two persons were convicted by the sessions court of murder and sentenced to death. The high court confirmed the sentences of 19 persons, acquitting or commuting the sentences of the rest. The reduction of sentences, according to the high court, was necessitated by the law — apart from the 19 ringleaders, the others were simply part of the crowd. Without condoning their lawlessness, the high court nonetheless spared them the gallows for being accessories to murder rather than its perpetrators. However, Abdulla, Bhagwan Ahir, Lal Muhammed and 16 others were not shown any clemency.

Chauri Chaura is remembered for the wrong reasons in India’s history textbooks. Jawaharlal Nehru labelled the protesters “a mob of excited peasants”; Netaji called them “exasperated villagers”. There was a palpable sense of all-round resentment. Little of this was directed against the protesters who, despite having committed the act of violence, were considered a footnote. The disquiet was against Gandhi himself for calling off a resurgent Non-Cooperation movement because of a sporadic act of violence.

Seeking to restore the pride of the protesters and give them their ‘rightful’ place in history, the Uttar Pradesh government has organized a year-long series of programmes to celebrate the centenary of Chauri Chaura. The grand inauguration repeatedly lauded the shaurya (bravery) and balidaan (sacrifice) of the men. Speakers at the function said that the fire in their hearts that burnt down the police station and took them to the gallows ignited millions of fires in the country.

To commemorate Chauri Chaura without any significant reference to Gandhi, Non-Cooperation and the setback it caused to the national movement is a calculated attempt to revise India’s nationalist history. This would not be the first time such revisionism has taken place. Local accounts have always portrayed the Chauri Chaura martyrs as heroes defying the raj rather than failed satyagrahis. They were celebrated with the establishment of a memorial in 1991, where they feature side-by-side with Motilal Nehru, who is supposed to have represented the accused in court (Shahid Amin has written excellently about these local accounts). But never before has such an alternative retelling received such weighty national endorsement.  Earlier, there may have been a good reason for this. Motilal Nehru may have been the finest lawyer in the Allahabad High Court, but there is no record linking him with the defence of the Chauri Chaura accused. Neither is there any evidence to back the claim that Chauri Chaura played any significant part in inspiring the freedom movement, as was claimed earlier this month. Freedom, when it did arrive, did not come from the barrel of a gun but rather from actively abjuring its use. It is likely that the organizers of the commemorative celebration knew these facts. It is equally likely that they chose to go ahead with a grand spectacle to capture the zeitgeist of our times — that a post-truth society is fertile ground for alternative histories.

When confronted with such events that are unapologetically designed to rewrite history, one can react with outrage and cite the facts from historically ‘authoritative’ sources. These facts would show that the Chauri Chaura protesters were volunteers who had taken a pledge of non-violence before joining the Non-Cooperation movement, a pledge they failed to keep. It would show that while brave in paying the ultimate price by taking the law into their own hands, they did the freedom movement a disservice, bringing to a grinding halt the hitherto successful Non-Cooperation campaign.

It would be rational to be outraged that these facts have been glossed over. But this only adds further grist to the post-truth mill, prompting more strident endorsement of alternative truths. This does not mean that fidelity to recorded accounts should be abandoned; instead we must be cognizant that merely recounting long-held facts is unlikely to upset retellings in a post-truth world.

The grand celebration of Chauri Chaura may more usefully be seen as an indicator of the emergence of a new kind of nation state in India. India has, for the last seven decades, been on a quest to find its authentic post-colonial self. One might have imagined that a post-colonial State secure in its acceptance of its British legacy while charting its own sovereign course might have emerged by now. But any such prospect has been consciously jettisoned to create the foundation of a republic that is a reactionary child of colony — a republic that celebrates violence, is at war with itself and, while claiming to look ahead, has its gaze firmly fixed on what has passed.

So when the prime minister and the chief minister of Uttar Pradesh hail the Chauri Chaura heroes, they are, in one stroke, creating new icons and denigrating old ones to build a New India. And who are these new icons? Nineteen volunteers, and countless others like them, who fought their colonial masters with political violence, an act as brave as it is old. While their sacrifice has never been in doubt, what is striking is the lack of originality of their act. In selecting these men as icons, no real vision of a post-colonial republic is proffered or even attempted. An indubitably brave but ultimately pedestrian act repeated millions of times in scores of countries across the world is being held up as a symbol of New India. New India, on this account, feels rather old and unoriginal.

In stark contrast, Mahatma Gandhi’s call to non-violence was not only revolutionary at the time, but also continues to be recognized as a truly original ‘Indian’ contribution to global movements. One may endorse it or resent it — that is a different matter. In the government’s celebration of Chauri Chaura is a clear message that Gandhian India and its unique ideal of non-violence have run their course. The government’s vision of New India needs a new Father of the Nation whose name isn’t Mahatma Gandhi.