Can we make communism relevant again? 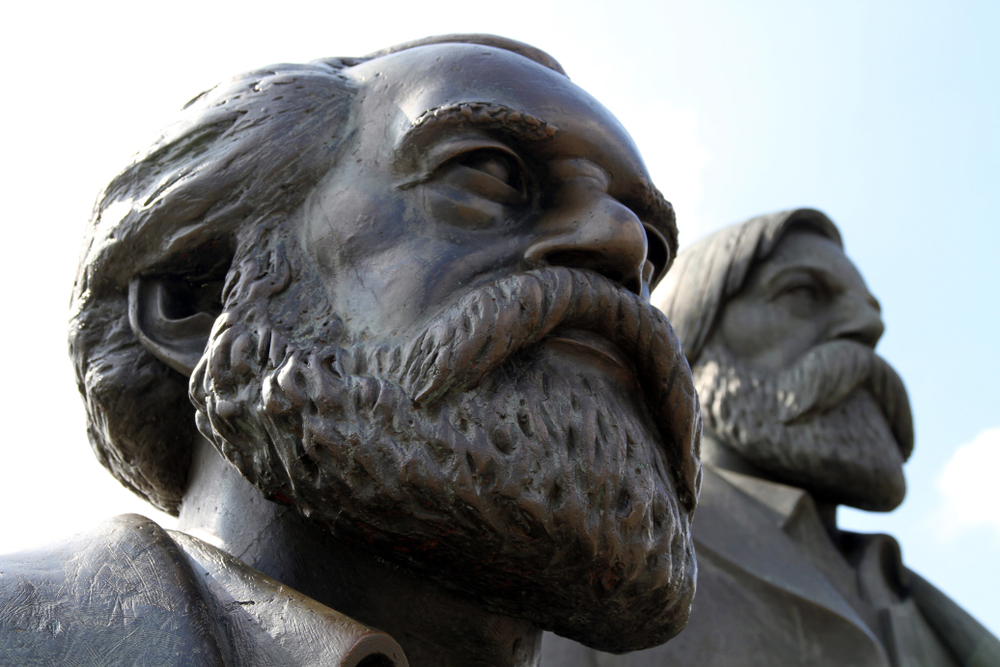 Karl Marx and Friedrich Engels monument in the park of the central district of Berlin, Germany.
(Shutterstock)
The Telegraph   |   Published 26.06.19, 10:16 AM

Sir — One agrees with Ramachandra Guha’s view that communist thought should be indigenized (“Homely traditions”, June 22). Karl Marx’s economic theory was designed for an industrialized nation. That is why it could be appropriated in Russia. Later on, the Chinese communists reimagined the Soviet principles to fit the needs of their agrarian society, shifting the focus from a worker-led revolution to peasant uprisings. If the Left in India wants to participate meaningfully in parliamentary democracy, the principle of indigenization must be adhered to.

The idea of communism is maligned because of certain missteps in its implementation. However, India seems to be strangely tolerant towards similar instances of violence when it is perpetrated by far right groups in the name of religion. Blindly instituting foreign philosophies in our country will only widen the current disconnect of the leftist parties with the masses. Communism could be the last resort for people, especially the lower classes, across boundaries like those of race, caste and religion. It is therefore all the more important that leaders revise the philosophy in such a way that it becomes more relevant to the lives of the people that it seeks to serve.

Sir — In his recent article, “Homely traditions”, Ramachandra Guha has traced the emergence and proliferation of Marxism in India to its present state in mainstream politics. During the 1960s, people were no strangers to slogans like “China’s chairman is our chairman”. Political rallies with people wielding red flags and protesting against human rights violations in foreign countries were a common sight. It seems like the Left was speaking up for the oppressed. However, I was shocked by its relative silence following the 1989 Tiananmen Square massacre in China. One, therefore, concurs with Guha that communists in India went a little too far to venerate their foreign idols, be it Mao Zedong or Josef Stalin, neglecting the philosophy of the leaders at home. It is thus no wonder that the communists eventually found themselves alienated from the masses.

It is true that the leftist leaders could have made an impact on various sectors of the country by joining the United Progressive Alliance government in 2004. But those opportunities seem to be a thing of the past. Further, it is the tacit transfer of votes from the Left to the Bharatiya Janata Party in the recently-concluded Lok Sabha elections that has made an irreparable dent in the prospects of the communists of Bengal to regain power.

Sir — While discussing the prospect of the communists to regain relevance in Indian politics — especially in the aftermath of the 2019 parliamentary elections — Ramachandra Guha has observed that a grave mistake was committed by the Left when it refused to join the government headed by Manmohan Singh, even when it had around 60 parliamentarians. Perhaps the Left did not actively participate in the government because that would require it to shoulder responsibility. Instead, it extended support to the government from the outside, thus enabling it to interfere in the working of the government without any accountability. On the other hand, when given the chance, Mamata Banerjee became the railways minister, even though she had significantly fewer parliamentarians at her command. She was able to extend benefits to West Bengal and thereby paved her way to eventually become the chief minister of the state.

The Bengali intelligentsia was indeed inclined towards communism. But the strength of the ideology rested on the support of the peasantry and the working class. The Left Front in Bengal hit the last nail in its own coffin by trying to acquire farmlands forcibly.

Sir — The Left has had little luck in most of the places where it had formed governments. Thus, the answer to the question about whether the Left has a future in India becomes clear when one realizes that it merely has five parliamentarians in the Lok Sabha.