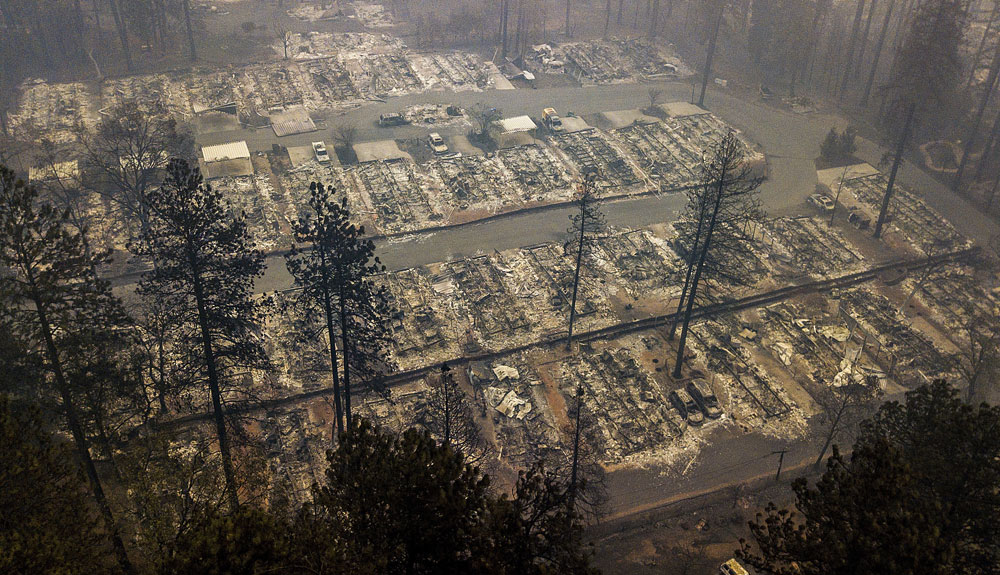 Homes levelled by the wildfire that broke out in Paradise, California, on November 8. Since 1990, around 60 per cent of dwellings that have come up in California, Washington and Oregon abut the wildernesses and grasslands, thanks to administrative laxity in enforcing rules
AP
The Editorial Board   |     |   Published 19.11.18, 03:17 AM

Paradise has been lost in California, not to the biblical flood but to fire. The town of Paradise, home to around 27,000 people, lies charred after being singed by a devastating wildfire, reportedly the worst in California’s history. The scale of the destruction can be gathered from the following — frightening — statistics: over 70 people have died and 1,000 citizens are missing; 12,000 buildings have been destroyed. It is not as if California is a stranger to fires. But the rise in their frequency and severity is being attributed to a set of factors that are, in turn, the result of larger changes in the climate and in the nature of human intervention. Global warming — there is no greater proof of human culpability — has turned the weather warmer and the Californian landscape drier, just the conditions that are needed to turn forest fires deadlier. Data suggest that many more Americans — most of them affluent — live in sites that are susceptible to this kind of incineration than earlier. In fact, according to some researchers, since 1990, around 60 per cent of dwellings that have come up not just in California but also in Washington and Oregon abut the wildernesses and grasslands. Such a transgression has been made possible by the laxity of authorities who are allegedly keen to earn dividends in the form of taxation by turning a blind eye to the risks posed by these habitations. Incidentally, state law in California makes it mandatory for the creation of buffer zones. It is clear that such a provision is not enforced with the seriousness that it merits.

The costs are high, figuratively and literally. It has been stated that in the past decade the California Department of Forestry and Fire Protection has been forced to shell out nearly four billion dollars — a sum that is higher than what had been spent in the last three decades. This expenditure must have miffed the president of the United States of America who, instead of blaming climate change, has, typically, attributed the occurrence to poor management. ‘Management’, ecologists have warned, has a special resonance in the logging industry whereby trees that survive fires are felled, leaving behind residue that is more vulnerable. While pointing fingers, Donald Trump chose not to acknowledge the fact that the majority of California’s forests are managed federally. When combined with greed and apathy, feigned ignorance can result in a lethal mix that, evidently, aids combustion.