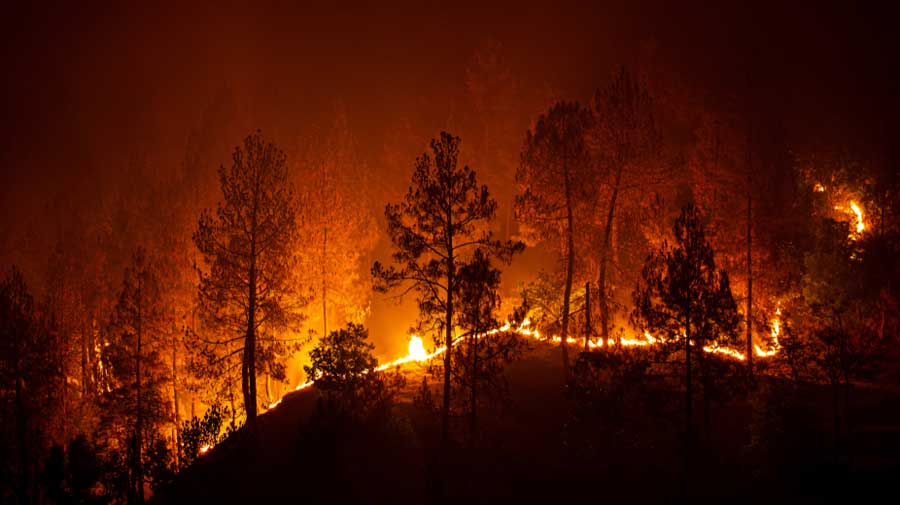 Wildfires are not uncommon. In fact, they are an important part of maintaining the ecological balance in certain forested habitats. However, this naturally-occurring event has reached alarming proportions on account of catalysts.
Shutterstock
The Editorial Board   |   Published 19.04.21, 12:54 AM

India is burning in more ways than one. The singeing death toll from a pandemic that refuses to abate, the subterranean fire of polarization — these are perhaps some of the metaphorical flames. But some other fires are real and as devastating. Several major forest fires have broken out in India since the beginning of this year, including in Madhya Pradesh, Odisha — home to Asia’s second-largest biosphere reserve — and Telangana. The latter has already recorded over 15,000 forest fires since the start of summer this year, a sharp increase over last summer’s count. The Uttarakhand wildfires that began over six months ago are still destroying large tracts of forests and have taken eight lives.

Wildfires are not uncommon. In fact, they are an important part of maintaining the ecological balance in certain forested habitats. However, this naturally-occurring event has reached alarming proportions on account of catalysts. One of these is climate change, which is responsible for the scarce rainfall and prolonged dry spells in the Himalayan region, rendering the forest floor tinder-dry. Human interference and encroachment — agricultural practices such as stubble burning, the deliberate lighting of fires to drive animals away or clear land — play a significant role as well. These practices do not just endanger biodiversity; they also contribute to forest fires not being recognized as natural hazards by the National Disaster Management Authority. The trust deficit between local communities and state forest administrations leads to the refusal to enlist the help of the former in dousing forest flames. Unfortunately, India does not seem to have learnt a lesson from international precedents. The lack of modern fire-fighting equipment, manpower and other resources have weakened rapid response mechanisms. Meanwhile, the State continues to pursue ecologically damaging policy: Uttarakhand has approved the contentious Laldhang-Chillarkhal road that will run through the only wildlife corridor in the state. Environmental protection is not a priority for either the Centre or the states. Matters are unlikely to improve unless public opinion is mobilized to demand political accountability for the negligence of the environment and its worrying implications — forest fires being one — on future generations. Children need to be drafted into this engagement: they can make a difference against the prevalent apathy as green ambassadors. Preserving forests is equivalent to protecting national wealth. The indifference of nationalist governments towards such plunder is shocking.