A book, a railway platform, and Berlin 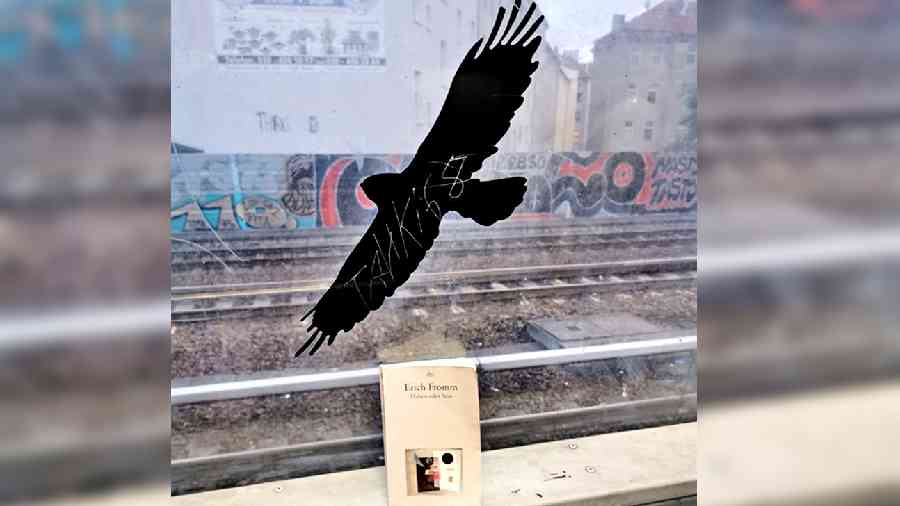 There’s a long, broad stairway leading up to the platform at the Wedding S-Bahn station in north Berlin. Depending on your level of fitness, you can scamper up these steps or you could trudge up slowly, feeling like you’ve arrived at some hill-top temple tirtha-sthal once you make it to the top. Being markedly closer to the latter type of climber, I was already almost stopping to catch my breath as I approached the top. My two younger companions were politely keeping pace. If we hadn’t been so slow, we might not have noticed the book, one can’t say for sure, but there it was, placed upright on the ledge of one of the huge windows typical of the Berlin Metro stations. Two of us noticed it simultaneously: a paperback, Erich Fromm, Haben oder Sein. We picked up the book and examined it. Had someone seen it lying on the ground and left it there for the owner to retrieve? Was it actually what the cover proclaimed or was it some sort of Berlin joke?

The paperback was a bit worn but in pretty good shape. Inserted between the pages was an envelope closed with a seal embossed with a dragonfly. The one German among us quickly opened the envelope and read the note inside. “Yes, we can take this,” she said and we jumped into the train with our find. The note was dated Berlin from three days earlier:  Dear Stranger, it said, You have found the letter. I hid it in a book through which many people have travelled. How can a person in a big city such as this build a bridge to someone unknown? Perhaps through words. Maybe through a dry message in a bottle that bobs ashore to someone. In case you are curious, please write to me and we can build a little bridge. Followed by an email address. I look forward to receiving your bottle-post amidst all this driftwood. Ahoy, signed with a first name, the gender of which was unclear. The friend from eastern Europe, in Berlin on a residency, decided she would adopt the book. She would use it as a launch pad to start learning German and also take it upon herself to communicate with the writer of the letter.

There are, of course, many different Berlins, each with its obstacles and possibilities as regards building bridges with strangers. At the peak of summer, jolting along in a train, walking in one of the parks, or passing by one of the many pavement bar tables and storefront benches, you can find it easy to strike up a conversation with random people, sometimes even without sharing a common language, the verbal bridge built with looks, grunts and laughs, gestures and a word-khichuri of basic German, English and other tongues, all of this lubricated by beer or wine or set in motion by the exchange of feuer, a light for a cigarette. Then there is the colder Berlin, a closer relation of New York or London, where the razor-sharp autumn or winter seals people into their jacket-silos, everyone hurrying past everyone else, blindered by hoodies and bad-mooded by the seven-month-long kidnapping of sunlight and warmth.

Architecturally, too, Berlin is a great shape-shifter, the wide, unforgiving avenues with open plots on either side, the narrow streets in some neighbourhoods, here and there the surprising ambush of vast greenery amidst residential parades. With time, the ways of building bridges between strangers have also changed, with dating apps being one prime, if narrow, example.

Just as there are new possibilities for connections, Covid has added its own memories of peculiarly formed personal islands. People who lived alone but depended on regular socialisation to nourish their need for human contact suddenly found themselves isolated for months in a way that might be difficult for us to imagine in India or in Calcutta. With the overload of Zoom and phone-based communication, people have developed new allergies towards their computers and mobiles. In India, you expect most WhatsApp messages to be answered in a short while, say an hour maximum, whereas here in Berlin no one is bothered if the reply comes two or three days later.

Amidst all of this, then, the simplest of devices: a book leant straight up on a window, a letter inside, written on lightly decorated letter-paper with a mauve felt pen, written probably not by a young person and probably not by a man, pushing forward two pieces at once on the chessboard of interaction: a book, which the inviter has probably read, with the ideas contained within, and an email address, presumably to be used only if the recipient-discoverer finds the book interesting — if they themselves are some sort of reader.

A sudden memory, then, of trying to read Fromm’s The Art of Loving in my teens in the late 1970s; eagerly picked up by a friend from one of the second-hand bookstores on Free School Street under the assumption that it was some sort of sex-manual, à la Kama Sutra, and then handed over to me in disappointed disgust. “American Freudian-communist psychologist. Tchhyaah!” Opening the book and trying to go up its long, difficult stairway, the connections among love, desire, narcissism, commodification and capitalism are quite hard to decipher for someone who was yet to live any sort of a life. Die Kunst des Liebens  being quite a different proposition from its English title, just as Haben oder Sein is from To Have or to Be?

All those weird, laughed-at notions of the early 1970s, the ones that questioned endless ‘progress’ aka monetary engorgement, the ones that suggested that smaller and less grandiose might be cooler, the fringe loonies who warned that we were facing ecological disaster and human extinction if we continued as we have been, striving towards ‘growth’ into billion and trillion dollar economies, the great crazy greed for possessions and the cost it claws out of our collective lives — all of that comes back into this one book, left as a first component of a possible bridge between two strangers.