The blood stains get deeper in Kashmir 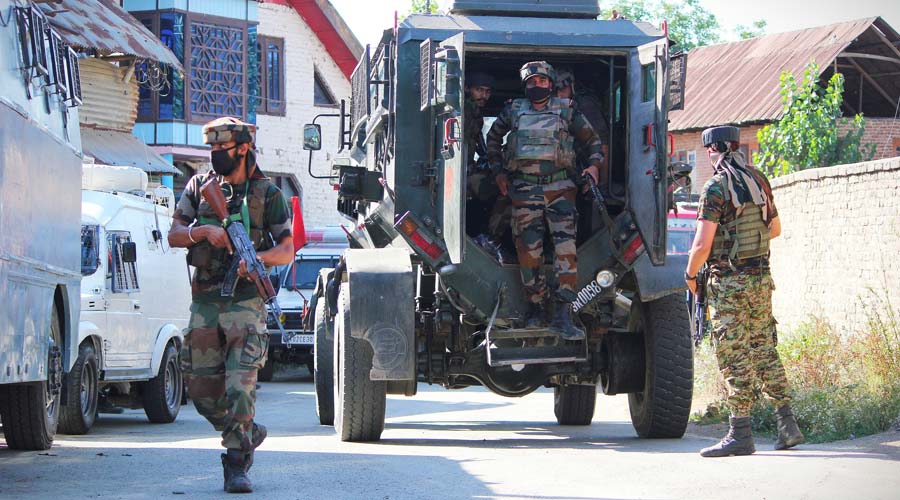 The recent, targeted assassinations in Kashmir bear an imprint of both the past as well as portents for the future. So far this year, 32 civilians, including 21 Kashmiri Muslims and 23 political workers, have been killed by militants.

The killings of the pharmacist, M.L. Bindroo, two school teachers, including a Sikh lady, and poor economic migrants from various states have set off a fear psychosis, particularly among minorities. Such killings of vulnerable civilians have taken place in the past. In 1990-91, along with political activists, several prominent persons, such as the vice-chancellor of Kashmir University, Mushir-ul-Haq, the general manager of HMT, H.L. Khera, public servants like the state Doordarshan director, Lassa Kaul, and information officer, P.N. Handoo, were assassinated. Respected Kashmiri Islamic figures of the stature of the 87-year-old Maulana Masoodi and Mirwaiz Maulvi Mohammad Farooq Shah were also killed.

Besides such targeted killings in the Valley, Jammu and Kashmir also saw large-scale massacres of religious and ethnic minorities between 1990 and 2007. Nearly 35 per cent of these took place in areas across the Pir Panjal in religiously and ethnically heterogenous Jammu. There were the massacres of 26 Kashmiri Pandits in Ganderbal’s Wandhama village on the intervening night of January 25 and 26, 1998, and on March 23, 2003, 24 Pandits were killed in Kulgam’s Nadimarg village as well.

This new spate of targeted assassinations marks a departure from the past in terms of the tactical peculiarity employed by militants and the political context they are aiming to capitalize. First, in over 31 years of militancy, an outfit owning up to the killings of apolitical, vulnerable civilians is rare. Militant groups were mindful of the popular revulsion they would trigger. For instance, the arrest of the Seraiki-speaking Mohammad Abdullah, the Multan-born teenager, one of the attackers in the Qasim Nagar massacre of 29 slum dwellers on July 13, 2002, proved to be the handiwork of the Lashkar-e-Toiba. In recent cases, The Resistance Force has claimed responsibility immediately. It seems that the TRF does not fear any popular backlash in the Valley although no society can condone attacks on unarmed civilians. The reasons for that are not difficult to discern.

After the changes brought about by the abrogation of Article 370, mass-scale hysteria about the possibility of a demographic change has swept the Valley. TRF, a motley group of militants from diverse organizational backgrounds, thinks it can capitalize on this anxiety. On June 1, 2020, it released a statement saying that “any Indian who comes with an intention to settle in Kashmir will be treated as an agent of RSS and not as civilian and will be dealt with appropriately.” This was preceded by the killing of five migrant labourers from West Bengal and truckers from outside the state in October 2019. A 70-year-old jeweller from Punjab, who had lived in Srinagar for the last four decades, was killed by militants on January 1, 2021. He had apparently got a domicile certificate — in line with the new regulations in 2020 — and had expanded his business by buying more properties. On February 17, the son of the owner of a popular vegetarian eatery of Punjabi background was killed. Several Punjabi Hindu families, particularly those from the Khatri caste, possessed permanent resident certificate, Kashmir’s domicile document before August 5, 2019. Some had come to Kashmir much before 1947 from undivided Punjab and had been an integral part of Srinagar’s retail business.

On-the-ground facts belie the claims of demographic change. Covid-19 and the lack of a secure environment in the last two years failed to attract human and financial capital to Kashmir. Only two persons from outside of Jammu and Kashmir have purchased properties in the Union territory since the abrogation of Article 370. As per the 2011 census, the number of the people who came from outside the former state and are long-time residents is a mere 0.16 million, an insignificant number to make an immediate dent on Jammu and Kashmir’s demography, even if many of them are able to satisfy the new stringent conditions of domicile order.

The school teachers as well as the Late Mr Bindroo possessed Permanent Residence Certificates. The presence of those being labelled ‘outsiders’ — economic migrants — is a reflection of Kashmir’s structural economy. The land reforms in the 1950s, inspired by leftist influence from Punjab, had catapulted Jammu and Kashmir to attain one of the lowest levels of poverty in the region. Land beyond the ceiling was distributed to tillers without compensation to the owners, an unprecedented event in the subcontinent’s history. In Kashmir, the daily wage rate of a carpenter and mason is Rs 700 while a non-skilled labourer gets Rs 500. The labour force from poorer areas thus fills the Valley’s deficient supply of labour.

The Centre can address the anxiety around demographic change within Kashmir with proactive communication, but this goes against the raison d’être of the abrogation of Article 370 and may not be electorally attractive in other states. In an environment in which facts on the ground do not match the rhetoric in support of the abrogation of Article 370, a different reality is being internalized in Kashmir and is being amplified in echo chambers of social media platforms. No member of the local political class, which stands diminished after 2019, is willing to contest the narrative with facts. From the security lens, the consequences of a weakened organic mainstream political class, with fewer engagement with the local populace, can be fatal. The interface between the political class and the local security apparatus contributed to pre-empting many a security as well as political challenge. This chain has been interrupted.

Luv Puri is the author of Across the LoC