Advertisement
Home / Opinion / An existential vote may soon be upon Britain

An existential vote may soon be upon Britain 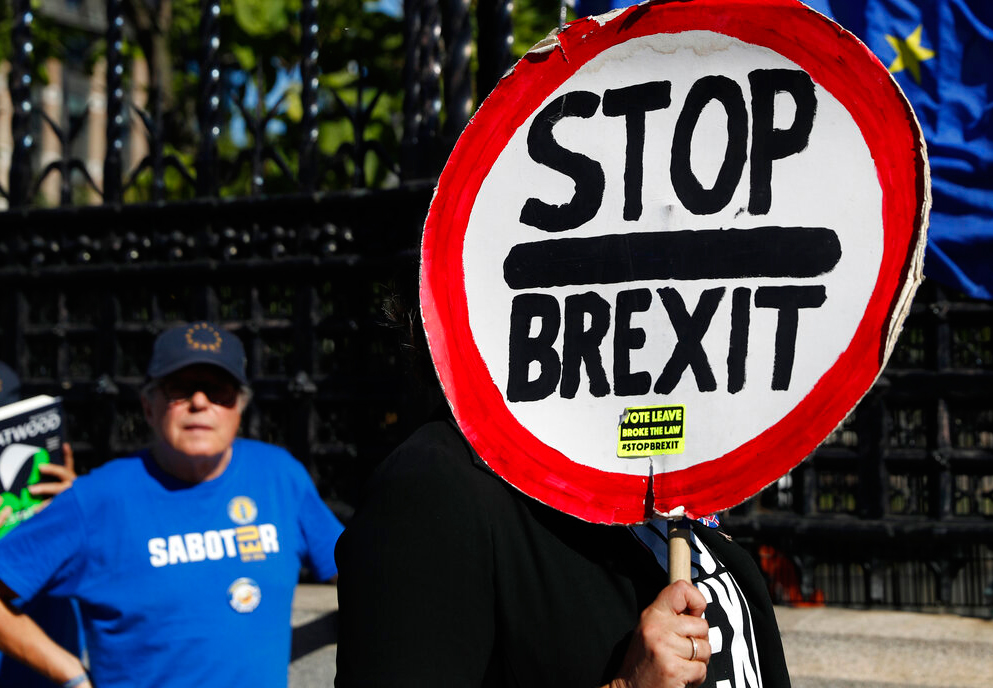 Ani-Brexit protesters demonstrate outside the Houses of Parliament in London on Thursday, September 12, 2019. There is still a chance — perhaps a last chance — for one of the world’s most venerable democracies to help turn the global tide against nationalist populism
(AP)
Timothy Garton Ash   |   Published 15.09.19, 07:16 PM

Britain is fast approaching a democratic showdown. The Brexit saga might yet prove to be among the worst of the current worldwide horde of nationalist populisms, or it could offer the best example of a democracy fighting back. To seize the chance of this crisis will require exceptional wisdom from every British voter who wants Britain to be true to itself. In the past, we talked of tactical voting; this time it will be existential voting.

The claim that British populism could be among the worst may seem like another example of Brits arrogantly overestimating their own importance. Worse than Viktor Orbán’s demolition of democracy in Hungary? Worse than what Donald Trump can do to international order? Yet no other populism is likely to dismantle the very country it claims to be saving. The end of the United Kingdom is a probable outcome of the hardline Brexit towards which Prime Minister Boris Johnson is steering the country like a demented racing driver. Brexit would also very significantly weaken both the European Union and the transatlantic alliance.

To be sure, measured by the standards of Hungary, let alone Turkey or Russia, British populism does not look so bad; but for one of the world’s oldest, most stable, parliamentary democracies, what has happened in Westminster is shocking. The Conservative Party, a centre-right broad church for at least a century, has become the Revolutionary Conservative Party. Recently, it purged 21 MPs, including Churchill’s grandson and two former chancellors of the exchequer, all of them more entitled to call themselves Conservatives than Johnson — let alone Dominic Cummings, his Mephistophelean adviser, who is not even a member of the party. Resigning from the cabinet in disgust, Amber Rudd, a one-nation Tory, called this an “assault on decency and democracy”. The Conservative revolutionaries have forced through the longest prorogation of Parliament since 1930, transparently lying about its purpose. “The people will never forgive the Remain plotters if they don’t back down,” Jacob Rees-Mogg, the Conservatives’s parliamentary leader in the lower House, thundered in the mass circulated Mail on Sunday, ignoring the fact that the last time the people actually spoke through the ballot box was in the 2017 election that gave us precisely this Parliament of ‘Remain plotters’.

And this is where the good news begins. Many television viewers around the world have been laughing at the House of Commons, with its antiquated procedures and theatrical Speaker. Actually, the Westminster Parliament is doing us Brits proud. Over the last couple of years, those green leather benches have seen great speeches, deep emotion and rare courage, with men and women genuinely putting the national interest before personal and party advantage. Now Parliament has stopped the populist bullies in their tracks, swiftly passing a law that obliges the government to ask for an Article 50 extension if no deal has been agreed with the EU and approved by MPs by October 19. Were Johnson to refuse to do so, as he is currently threatening, then he would have broken the law and could, ultimately, be sent to prison.

What should Britain’s democratic showdown look like? The former prime minister, Tony Blair, says we should go straight to a second referendum. That is exactly where we should end up, but there are not the numbers in this Parliament to vote through the necessary legislation. It is just possible that Johnson will abandon all his red lines and scramble towards a slightly modified version of the deal negotiated by his predecessor, Theresa May, which could be agreed at the EU summit on October 17-18 and might even scrape through this Parliament.

Absent that unlikely turn, the next step is a general election. Since Johnson cannot be trusted, the Opposition parties have agreed to wait until an Article 50 extension is secured before consenting to that election. If Johnson resigns rather than request an extension, that will get us to an election by another route. Much though their patience has been tried, the EU 27 would be wise to grant an extension of at least two months on the clear understanding that Britain’s sovereign Parliament will have brought about a general election within that time. The alternative, a no-deal Brexit, is much worse for both sides of the Channel and future relations across it.

In this election, the advantage will be with the hard Brexiteers. They have a single clear objective — get Britain out of the EU — and their vote is only divided two ways, between the Revolutionary Conservative Party and Nigel Farage’s Brexit Party. They could make an electoral pact. Farage says “an alliance between Boris and myself” would be “unstoppable”.

The other side does not have a single clear objective. Many, myself included, are for holding a second referendum, but others are just for a softer Brexit. And our vote is potentially split seven ways, among Labour, Liberal Democrats, Greens, the Scottish National Party in Scotland, Plaid Cymru in Wales, the Independent Group, and the now quite numerous former Tory MPs, some of whom will probably stand as Independent Conservatives.

To win this election will, therefore, require unprecedented cooperation among Opposition parties, constituency by constituency. Labour and Lib Dems, above all, should agree to step back wherever the other has a better-placed pro-referendum candidate. It will also require unprecedented mobilization, discipline and skill on the part of voters, identifying the candidate to back in each constituency. This is what I call existential voting. The People’s Vote campaign promises online guidance. (I hope they will recommend support for Independent Conservatives like Dominic Grieve.) Social media and youth turn-out will be pivotal. Officials in 10 Downing Street have told Katie Perrior, a former communications director at Number 10, that one reason they want an early election is to pre-empt incoming students registering to vote and potentially swinging the result in their university towns. I trust that indicates to all students exactly what they need to do.

An analysis of recent polling by the political scientist, Matthew Goodwin, shows just how decisive this existential voting could be. If the Tories pick up more than half of current Brexit party supporters, they gain an overall majority of seats in Parliament. If, however, Labour and Lib Dems forge a successful electoral pact, the result is a pro-referendum majority in Parliament.

Even if the Opposition parties and independents get that majority, they still need to keep it together to legislate for a second referendum. Even if we reach a second referendum, we still need to win it. Even if we win it, we will still have the huge task of showing those who in 2016 voted for Brexit, often for reasons little related to the reality of the EU, that we have heard them loud and clear. But at least there is still a chance — perhaps a last chance — for one of the world’s most venerable democracies to help turn the global tide against nationalist populism.

The Brexit impasse is hurting the credibility of Britain's Parliament