THE THIN EDGE: Team Modi is in tatters 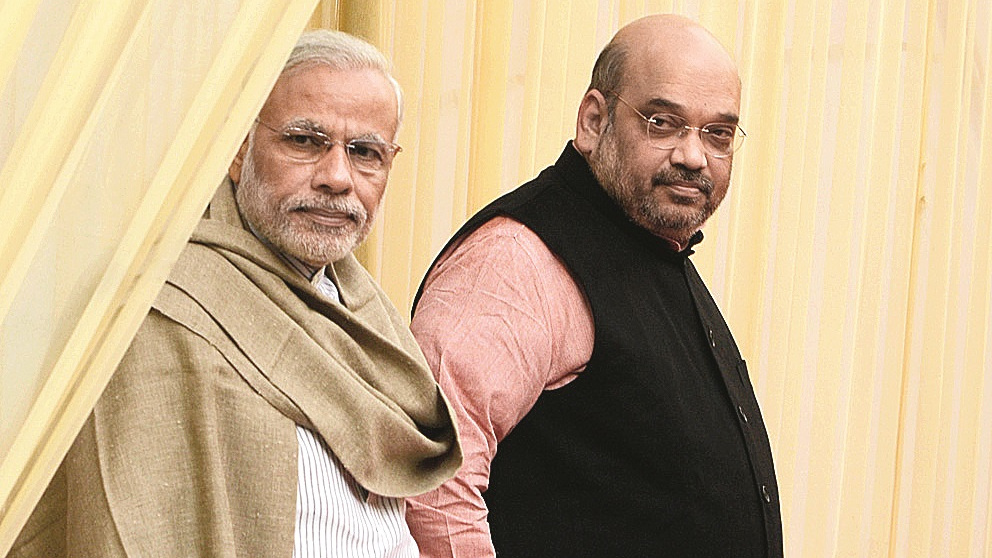 It’s best to state this simply: Narendra Modi needs to go. Amit Shah needs to go. Ajay Mohan Bisht aka Yogi Adityanath needs to go. The bunch of integrity-free incompetents Mr Modi has gathered around him as his ministers all need to go. In order for the country to launch the mammoth operation of recovery and repair needed for our survival, the departure of these people from positions of power needs to happen immediately — tomorrow is too late, yesterday would have been better.

When Mr Modi took oath as prime minister in May 2014, he did so adorned with the many different capes and scarves of hope draped on him by various worshippers and admirers. Waving away the sceptics and objectors who had old-fashioned attachments to secularism, human rights and economic justice, the believers revelled in the proud strutting of their messiah. Remember the proclamations of the core followers and the newly converted, many coming from the man himself. Modi doesn’t eat or let anyone eat (he’s not corrupt and doesn’t allow anyone else to be corrupt). He may drive over some pesky minorities but he’ll steer us to genuine progress. Human rights and ecological protections are barriers to ease of doing business and turning India into an economic powerhouse; real human rights will be experienced by the millions he raises out of poverty.

In the first days of Modi-rule, you constantly heard gushing praise: he may not be educated but he’s got a phenomenal ability to grasp things; whatever you say, boss, but Gujarati efficiency is something else; his stamina is just amazing; he hardly sleeps and that’s put a fire under the seats of the bureaucrats — the babus are now punctual, the files are moving so fast; here is a man with a vision and focus; look how warmly and directly he connects with world figures; he can deal with Pakistan and China from a position of strength; they recognize they can’t mess with him like they could with the weaklings previously in charge.

Over seven years, even as Mr Modi has preened in name-embroidered suits and plumed headgear, the virtually projected garments have fallen off him, one by one. Even as his ‘brand expansion’ has grown to mind-boggling levels, his promises have crashed and burned. Under this regime, corruption has been rocketed into another dimension, so much so that the word itself becomes inadequate to describe the massive network of interlocking institutional lying and criminal law-bending. Over seven years, lunatic servility to oligarchic interests along with other monumental cock-ups has played havoc with our economy. Under Mr Modi’s leadership, we have been made a laughing stock by Pakistan with the famed Balakot bombing raid on a clump of trees and the capture of our pilot; and we have been repeatedly humiliated by China. And, now, finally, despite having had a year to shore up the basic defences against the biggest natural calamity faced by independent India, we are on our knees, physically and mentally. The full roster of this regime’s intentional and unintentional misgovernance will become horrific lore in the annals of history.

In any democracy worth the name, just one of these two botch-ups — the demonetization fiasco and the floundering response to Chinese aggression and the ensuing cover-up — would have led to the fall of a government. That this did not happen is due to a much greater malfeasance. If Mr Modi and Mr Shah have had efficiency, stamina and detailed focus towards anything, it is in the deliberate and relentless hollowing out of democracy itself. It is now beyond doubt that the messiah and his chief acolyte came to power in 2014 with one aim and one aim only: to turn India into an autocratic Hindu rashtra, bolstering and, in turn, bolstered by few big business houses. For the imperatives of international optics and internal misdirection, this was to be executed while maintaining the fake image of a functioning democracy.

In a stadium owned by a dictator you may have the ritual of a game between two teams, but in reality only the dictator’s team can win. Mr Modi and Mr Shah have worked towards a hostile takeover of the stadium of Indian Democracy from the day they assumed power in 2014. To aid in this project, you had the obsessive attention to image-management via the co-opting of large sections of the media, then you had robbery in broad daylight in the shape of the electoral bonds, and then you had the unprecedented, brazen weaponization of the investigative agencies in the open service of the ruling party. All this was crowned by the mysteriously consistent reluctance of the Supreme Court in checking various actions of the Union Government or its agencies.

The deliberate spreading of distrust and hatred among people of different religions, the banana republic hijacking and the lockdown of Kashmir, the grotesque NRC/CAA ‘laws’, the Ayodhya Ram Mandir ‘judgment’, the Bhima-Koregaon arrests, which many convincingly argue are mala fide, were all dependent on this creeping, toxic fungus-like encompassing of the institutions of the State.

What the fungus was not expecting was a deadly attack from a virus. I read somewhere that the recent blocking of critical Twitter accounts by the government means that it realizes it has failed to discharge its duties. To which one could say that this government never intended to discharge what millions of us regard as its duties. It simply took the pandemic as an extremely useful tool gifted to it by the gods, a tool it could use to further its agenda — to stifle dissent, to topple Opposition state governments, to ‘win’ elections. Now, when things are spiralling tragically out of control, the government’s main concern — yet again — seems to be about managing perceptions. The French have a saying, ‘Breaking the thermometer to bring down the fever.’ We are where we are today because of this trail of broken thermometers. And because of this, if nothing else, Mr Modi and Mr Shah need to go.