Advertisement
Home / Opinion / The hand that moves the bottle...

The hand that moves the bottle... 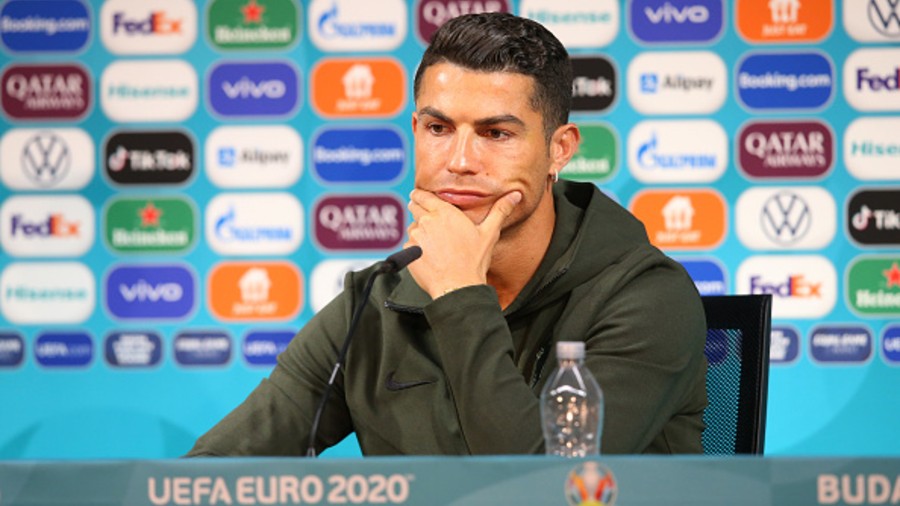 Cristiano Ronaldo of Portugal speaks to the media during the Portugal Press Conference ahead of the Euro 2020 Group F match between Hungary and Portugal at Puskas Arena in Budapest, Hungary.
Getty Images
Upala Sen   |   Published 20.06.21, 12:37 AM

When beggars die there are no comets seen. But grand brands will take a rough tumble at the mere gestures of stars. Star footballer Cristiano Ronaldo’s recent shove to Coca-Cola bottles at a European Championship presser caused a $4 billion drop in the soft drink giant’s market value. Coca-Cola is one of the 12 top-tier sponsors of Euro 2020. As for Ronaldo, he has 500 million followers across social media platforms. On Instagram alone he has 301 million followers, which is said to be more than the combined following of all 20 English Premier League clubs. Even as the rest of the world and brands continued to be amused, pushing out memes and smart advertisements, the UEFA or Union of European Football Associations directed players not to move any bottle.

Till human frailty do us apart

Brands bruise easily. But that’s expected given they hitch their fortunes to stars with clay feet who fumble along. Brylcreem sales reportedly dipped in 2000 after David Beckham shaved his hair in the third year of his contract with the hair styling cream. After golfer Tiger Woods’s sex scandal in 2009, a zillion brands including Accenture stayed away from him. The Accenture tagline had been — 'We know what it takes to be a Tiger'. Woods had barely recovered from it all when, earlier this year, he got into a serious car crash that injured him and also the image of the Genesis GV80 SUV he was in. And Nike was in a spot when South African sprinter Oscar Pistorius was charged with the murder of his girlfriend in 2013 and later, convicted; he had shot her with maximum-damage bullets. The Nike tagline had been, ‘I am the bullet in the chamber’.

Closer home when Sourav Ganguly suffered a health setback, all ads of him endorsing the cooking oil from the Adani stable were “temporarily stopped”. To return to "Bottlegate", notwithstanding the UEFA rap, footballer Paul Pogba of France pushed aside a bottle of Heineken at the presser following France’s 1-0 win over Germany. Heineken happens to be another top-tier sponsor at the games. The following day, at the presser post Italy’s 3-0 victory over Switzerland, the inspired Italian midfielder Manuel Locatelli planted a bottle of water on the table, moved the bottles of Coca-Cola, and mimicking Ronaldo mumbled “acqua”, basically to say drink water, with a cheeky smile. And the day after, Ukraine winger Andriy Yarmolenko drew Coca-Cola and Heineken bottles into a huddle and chortled "get in touch with me fellas".

After all, the concept of brand loyalty does not apply to brands, only ambassadors and consumers. Right?