Advertisement
Home / Opinion / The government borrows shine from the soldier

The government borrows shine from the soldier 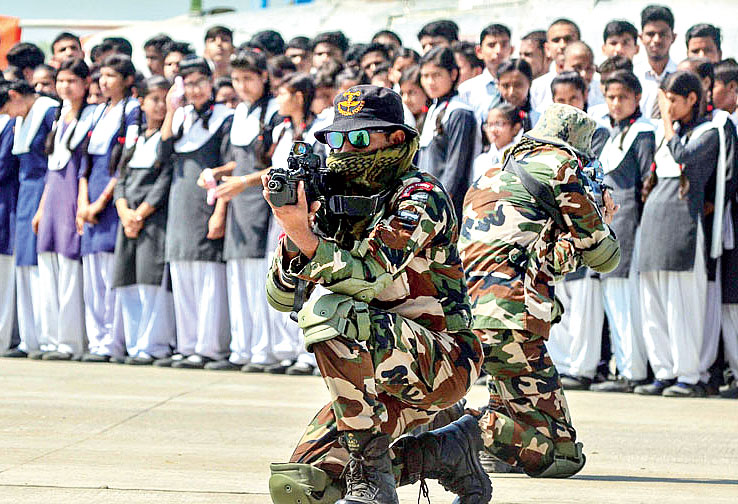 There came a moment in my recent interaction with the chief of the army staff, Bipin Rawat, whose implications are unsettling enough to require remark. I ventured to get his sense of the situation in the Kashmir Valley, and he stopped me short and said he would like to wait a while before he opened up. “There is a new man there,” he said, meaning the recently appointed governor, Satya Pal Malik. “We want to give the new man time. I do not want to fix his position by making statements… I will speak later. He has to set the agenda. He has to decide what he wants to do, how he wants to handle the situation. If I speak now, people will say the army is trying to influence him or dominate the discourse in Kashmir. That will not be right. We have to see how he goes about it. If he has plans and he can rein in terrorism, we will be most happy.”

On the face of it, that seemed a fair comment — a new chief executive is in charge, he must run the place. But give that another read and you may perhaps realize what Rawat said is troubling on many counts. Referring to Governor Malik as nothing more than “new man” is the least of them. Implied in what Rawat said is that time is for him (and the armed forces) to grant to the civilian administration. Implied in what he said was the sense that Governor Malik was on test. Implied too was a taunt — “If he has plans and he can rein in terrorism, we will be most happy.” Implied, most worryingly, in his tone was something that said the buck stops with me: “I will speak later.” It was a tone of easy swagger and overlordship that appeared to make little allowance for what else there might come to bear on the future course in Kashmir — the elected government seated three corridors from him at the top of South Block, for a start.

How have we arrived at this pass? How have we arrived, almost without notice or cognition, at the military brass assuming — even exuding — an air that almost domineers civilian authority? How have we arrived at a general who hectors his presence and hollers policy intent ahead of the government that he is signed up to serve? “Talks and terror cannot go hand in hand”; “It is time to give it back to them [Pakistan] in the same coin”; “People need to be afraid of us”; “The army is your last resort”. It is how we have heard generals in Pakistan usually speak; it is a voice and a vocabulary a prided democracy such as ours should remain uncomfortable about.

The meditated and deliberate manner in which the Narendra Modi government has come to project, and use, the armed forces for its political ends cannot be cause for comfort. Our armed forces are an institution — and an exemplary and distinguished one — of the Indian State; they are not an extension or an instrument of the government of the day or the political party the government belongs to. The Indian armed forces are neither the PLA of China, nor do they march like the battering arm of the Nazi party in Germany.

The government diktat on celebrating Surgical Strike Divas — the anniversary of the cross-border operation of September 2016 — is quite the symptom of a potential malaise the Modi government is nurturing. The Indian armed forces have a long and illustrious tradition of valour and service. There can be no argument that the jawan is deserving of our tribute and gratitude and, very often, celebration. But there should be an argument when a government picks out one event out of a boundless catalogue and orders a nation-wide jamboree. If its daily valorization of the jawan on the political maidan has made a stable trend of the politicization of the armed forces, the decision to celebrate Surgical Strike Divas could well set off the beginnings of the militarization of the polity, a polity dosed and spurred on militarism and vengeance of the kind that the Establishment has begun to unabashedly espouse and vow. It is not, in fact, the jawan that the government is celebrating when it orders such festivity; it is the use of the jawan as a badge of achievement pinned to the lapel of the government of the day: who effected the surgical strikes? Modiji did, and so hail Modiji! Did it occur to anyone in the government, after all, that the anniversary of the war of 1965 came to pass barely a week before Surgical Strike Divas and it was allowed to go unnoticed? But of course Modiji was not in power then, so leave that anniversary, or any other whose credit the Modi government cannot claim.

It is quite another matter that the surgical strike of two years ago remains a thing of doubted depth and dubious dividends. If it was meant as a dare and deterrent, it proved resoundingly counterproductive. The Line of Control has never been so unquiet as during the past couple of years — ceasefire violations, often rather violent and sustained, have spiralled from 100-odd in 2010 to more than a thousand last year. The number of soldiers who died in Jammu and Kashmir since 2014 is now 219; the count in the previous five years was 144. The tumult in the Valley itself has shown no signs of easing.

And while the Modi government tilts full throttle harnessing the soldiery to its political ends, it actually offers the soldier or the brass little. It uses the jawan to feed its rhetoric, it pays little attention to feeding the jawan or his urgent requirements. Or even the requirements of national security. What did the vice-chief of the army staff, Sarath Chand, tell the parliamentary standing committee on defence just a few months ago? “Funds allocated are insufficient and the army is finding it difficult to even stock arms, ammunition and spares for a 10-day intensive war.” He had prefaced his position remarking that the defence budget had “dashed our hopes” and that the marginal increase had barely compensated for inflation. More than 80 per cent of the defence budget goes to meeting ways and means of expenditure. Sixty eight per cent of the equipment the jawan has is obsolete. Seek out sentiment beyond the rhetoric the brass brandishes and there is unease and restiveness to be found in the ranks — an imperfect OROP settlement, grouses on how the Seventh Pay Commission has filtered down, unhappiness over being yoked more and more to civilian undertakings, shouldering and mending failures that are not of their making. The Modi government borrows shine from the soldier each day, it bestows on him tatters. It is one thing to honour the casket of a soldier who falls in the line of duty, quite another to provide him well enough to stand and fight. Surely, the jawan that Prime Minister Modi so loves to extol from the pulpit deserves better. The nation does too.