Democracy works in a din 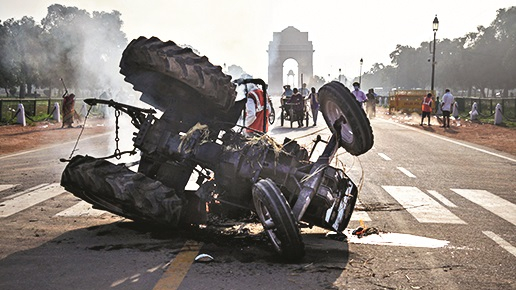 Experience from history shows that maintaining democracy in times of war is a formidable challenge. What India and, indeed, the whole world are confronted today with — the Covid-19 pandemic — may not be novel — the 20th century has witnessed an influenza epidemic and outbreaks of plague, cholera and smallpox in India — but it is still extraordinary. Earlier in the previous century, foreign rule and the absence of elected governments prior to 1947 meant that there were limited expectations from the government. However, the presence of elected governments both at the Centre and in the states has meant that the onus of doing something purposeful to resolve the crisis has devolved almost entirely on the State. While the expectation that only divine intervention will find a way out hasn’t disappeared entirely from the popular imagination, the insistence on State-based solutions is more widespread.

For democracy, this is a daunting prospect. As a rule, democracy works in a din. It operates in an environment of ‘argumentative’ groups and ‘million mutinies’ — expressions popularized by Amartya Sen and V.S. Naipaul. By definition, decision-making is slow, and politics necessitates compromises. In theory, a prime minister may enjoy formidable backing and the trust of a majority. At the same time, the system has to factor in awkward voices from multiple sources and institutions. Even the sincerest attempts at forging consensus and taking everyone along leave behind a trail of dissatisfaction and disappointment. In particular, intellectuals, activists, experts and, occasionally, judges feel only they have a monopoly over wisdom and the truth. At a time when the popular expectation is for decisiveness and speed, democracy encourages both prevarication and delay. Yet, as someone rightly remarked, a more agreeable alternative to democracy hasn’t yet been thought of.

This may be a reason why, say during war, almost all operational details involving the military and even the management of the home front are kept out of scrutiny. During both the Wars of 1914-18 and 1939-45, Britain, which valued its home freedoms (never mind the larger Empire), put in abeyance the principle of habeas corpus for selected ‘subversive’ individuals such as Sir Oswald Mosley. There was large-scale removal of ‘enemy aliens’ to inhospitable internment centres. Additionally, there were severe restrictions on ordinary individuals that included draconian rationing of food and clothing, restrictions on travel and compulsory requisitioning of property. The punishment for those who violated the rules was extremely severe and, in some cases, disproportionate. Many of these restrictions triggered a great deal of public resentment and contributed to a series of government defeats in the by-elections held during the course of the War but the larger principles of national security and greater public good prevailed over the disquiet over the erosion of democratic principles.

The battle against Covid-19 may not be exactly comparable. However, the battle against this deadly virus has involved taking steps that would have never been countenanced in ‘peace time’. It is undeniable that the initial 21-day lockdown that hardly gave people time to make arrangements was draconian. It imposed restrictions on movement, affected livelihoods and was involuntary. The suddenness of the decision took even state governments by surprise and some chief ministers were understandably peeved at the lack of consultations.

Although the power of the Centre to take decisive steps to manage pandemics is legally sanctioned, the lockdown can perhaps be faulted for offending the ‘spirit’ of democracy. Certainly those who described the panicky trek of some migrant workers back to their villages as a ‘humanitarian disaster’ saw it that way, and they attacked the prime minister, Narendra Modi, for it. However, the more relevant question is whether or not this precipitate measure corresponded to the larger public good.

In his statement in Parliament, the Union health minister, Harsh Vardhan, argued that the 21-day lockdown “successfully blunted the aggressive progression” of Covid-19. He estimated that apart from giving India the time to bolster its health infrastructure, the lockdown “prevented approximately 14-29 lakh cases and 37-78 thousand deaths.”

As with most counterfactual estimates, the minister’s assertion cannot be rigorously tested. However, two things are clear. First, the lockdown was in the nature of a pre-emptive strike since the spread of the virus was dependent on human contact. Secondly, the lockdown was based almost entirely on the then existing expert opinion of medical scientists. It is conceivable that in future days, lockdowns will be seen as exaggerated responses and not commensurate with the economic costs of disruption. However, at the time the decision was taken, scientific opinion indicated that a surgical strike was the most effective way to keep the virus from multiplying. Under these circumstances, the choice exercised by Modi was to unhesitatingly prioritize the public good over democratic niceties. It is for the people to judge if he was right or wrong.

Likewise, criticism has been heaped on the government for rushing through 25 pieces of legislation during a truncated monsoon session of Parliament. Most of the bills had been promulgated as ordinances and Parliament merely ratified them without exhaustive discussions or reference to select committees. Consequently, this Parliament session, too, has been debunked in some quarters as a farce and a murder of democracy.

In judging the undeniable haste with which Parliament conducted its business, the context and the choices before the government are important to consider. By the beginning of April this year, the global severity of the pandemic and the magnitude of disruption were slowly becoming apparent. With the total disruption of normal life, the first choice before the government was stark. Taking into account the suspension of normal life, should the government have suspended all ‘normal’ politics and assumed the role of a caretaker administration, doing the barest minimum? Alternatively, considering the emergence of fresh, difficult challenges, should it have assumed a greater proactive role, despite the fact that many of the forms of democracy were impossible to sustain in the time of pandemic? In the face of the widespread economic dislocation resulting from the pandemic, should it have let the crippled market find a new equilibrium or should it have intervened with rescue packages and overdue reforms?

These challenges were not unique to India. Every government in the world has faced it and broadly responded with interventionist strategies that range from short-term protection of vulnerable jobs and bolstering public health infrastructure to undertaking structural reforms in different spheres. India, on its part, faced an additional challenge of China attempting to redraw the Line of Actual Control in Ladakh.

There were two choices before the Modi government. The first option was to quietly acquiesce to this aggression on a specious plea that ‘not a blade of grass’ grows in some of the uninhabited zones of contention. Indeed, there have been strategists who, under earlier governments, favoured tacitly accepting China’s hegemonic role in Asia on the ground that India couldn’t afford opening a second front. Alternatively, it could respond with a show of military determination — despite the huge additional costs involved — and diplomatic nimbleness. It could also — as has been done — retaliate in a limited way by making access to the Indian markets inhospitable for Chinese companies. This too has been done under the cloak of data protection and national security.

The larger point to note is that Parliament witnessed only a truncated debate on the economic initiatives taken after the pandemic and merely noted a statement by the defence minister, Rajnath Singh, on the Sino-Indian tensions. In effect, Parliament, meeting under extraordinary circumstances, acquiesced to the principle that circumstances warranted the country putting its faith in the executive.

Meanwhile, on the streets, an agitation of big farmers demonstrated that the josh of democracy remains unaffected, never mind what the Modi-haters say.