The Union budget is an embodiment of unequal fiscal policy 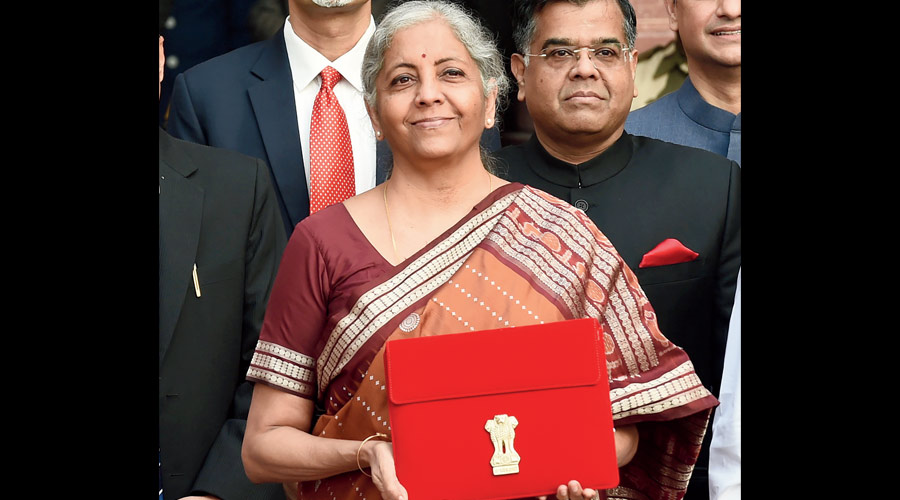 Union Finance Minister Nirmala Sitharaman holds a folder-case containing the Union Budget 2022-23 as she poses for a group photograph with MoS Finance Pankaj Chaudhary and officials of the Finance Ministry, at North Block in New Delhi, Tuesday, Feb. 1, 2022. Sitharaman will be presenting her fourth Union Budget in Parliament.
(PTI Photo/Shahbaz Khan)
Jayati Ghosh   |   Published 02.02.22, 12:03 AM

The finance minister and her ministry have betrayed, once again, their lack of understanding of the Indian economy or the conditions under which most Indians are living today. Despite attempts to ‘talk up’ the supposed recovery, the economy is weak and most people are hurting.

India has seen one of the biggest increases in the number of poor and hungry people in the world in recent years. The data on employment are horrific, especially for a country that was supposed to gain from a demographic dividend. Private investment is sluggish despite the massive and repeated incentives being thrown the way of some big corporates. Public spending during the pandemic has been miserly and very inadequate, making India an outlier even among other middle-income countries. This has deprived most Indians of their basic socio-economic rights and essential public services during a period of health crisis and economic devastation.

A major underlying problem is the lack of domestic demand, which was already weak before the pandemic hit as mass consumption had been falling. This reflects the most fundamental conditions of employment and livelihood: micro, small and medium enterprises that employ the bulk of the Indian workforce are collapsing; agriculturalists continue to suffer; hardly any new jobs are being created for the tens of millions of young people who have gone through tertiary education in the hope of bettering their prospects. Meanwhile, both public health and education services have been battered, pointing to a worrying trajectory for the future.

If the finance ministry were seriously concerned about all of this, we would have had a very different budget — one that would focus on reviving the MSMEs, addressing the concerns of farmers, significantly expanding the rural employment guarantee programme and beginning a national urban public employment programme, dramatically increasing outlays in health and education to enable wider social recovery from the pandemic and make up for the years of severe neglect. We have got none of this. The areas that remain crucial for people’s well-being and livelihood and, by extension, for the regeneration of mass demand remain massively underfunded with some critical sectors even receiving lower allocations than before.

The most egregious and appalling indication of this is the reduced allocation to the Mahatma Gandhi National Rural Employment Guarantee Act. This is by law meant to be a demand-driven scheme under which the Central government is duty-bound to provide whatever funds are required by the demand for work. Yet, the Centre has starved it of funds even as the pandemic persisted and people had no other means of generating income. Each year, the programme finds itself in a deficit as the allocated budget is insufficient to cover even the money already spent by states and is less than the amount that would have been required. In 2020-21, some increase in the allocation was inevitable because of the severity of the lockdown-induced crisis, but even this was inadequate for the requirement.

More shockingly, in the current financial year, the government has reduced the allocation to the MGNREGA to Rs 73,000 crore despite clear indications that at least Rs 1,20,000 crore would be required to meet the labour budgets of the states. A supplementary allocation announced in December brought the total to Rs 98,000 crore, which is still not enough to cover the money already spent, with two months of the programme still to come in this financial year. Yet, the allocation for the coming year is back to only Rs 73,000 crore. Since at least Rs 20,000 crore will have to go into meeting the previous year’s unpaid dues, this is a tiny allocation that would provide less than 20 days of work per household at current rates. The implications go beyond the programme itself: this can be an important source of reviving mass demand, creating ripple effects for the local micro enterprises.

Similarly, health and family welfare, the importance of which should be obvious by now even to the most cynical of governments, received no increase in allocation beyond the current levels of spending. Most countries across the world have increased their education spending significantly to make up for the loss of learning during the pandemic; this is even more important in India where the sudden and prolonged closure of schools and colleges has had a devastating impact. Yet, the Central government has actually reduced its education spending during the pandemic. The paltry increase suggested in this year’s budget is nowhere near enough to meet the enormous need. Instead, the budget speech promotes TV channels as substitutes for actual increases in public provision of functioning schools with sufficient well-trained teachers. Instead of these crucial areas that matter for most people, the focus in this budget was supposedly on increased capital investment, which, admittedly, is also very necessary. But these large infrastructure projects, too, would immediately benefit only the companies that are able to garner public contracts — and they are likely to be those already favoured disproportionately by public policies in recent years.

Remember that even in this period of national catastrophe, a tiny minority has gained quite a lot, to the point that India is estimated by both the World Inequality Report 2022 and Oxfam’s Inequality Report 2022 to have one of the greatest increases in inequality of incomes and assets in recent years. In an economy with an overall decline in employment and mass consumption, even the privileged few will face difficulties unless new sources of demand can be found. And this is where the increased capital investment can play a role, generating a new avenue for an immediate source of profits for the buyers of electoral bonds.

It is hard to imagine such a fiscal strategy persisting in any but the most distorted of democracies. It remains to be seen how viable such a blatantly unequal fiscal policy will be over the medium term.