Animals not only have to contend with the man-made vagaries of the climate, but also with the fallout of human superstition 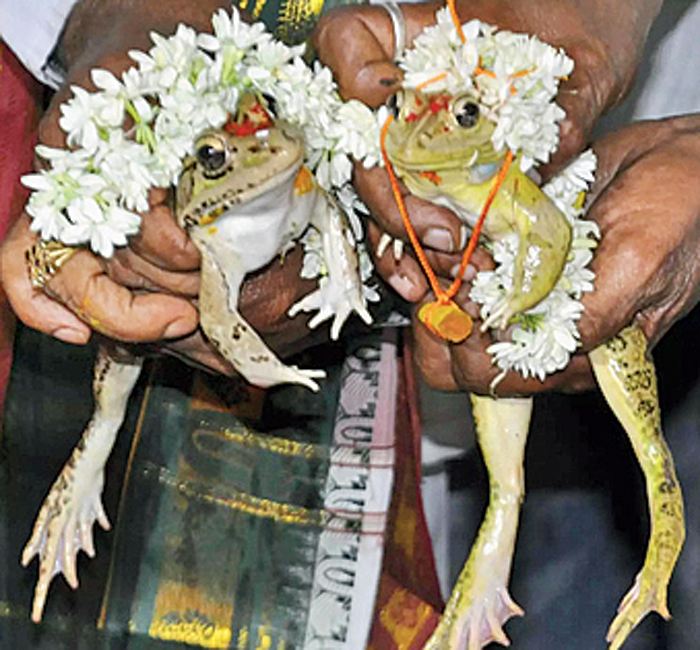 Two frogs were recently married in Bhopal to please the rain gods, as rain eluded the region. Since then rains have wrought havoc in the lives of people. People have now gone ahead and divorced the frogs symbolically to end the rains
Wikimedia Commons
The Telegraph   |     |   Published 13.09.19, 09:48 PM

Sir — As flies to wanton boys are animals to human beings. Two frogs were recently married off in Bhopal to please the rain gods and induce monsoon showers that seemed, till then, to have eluded the region. Since then rains have lashed the region, wreaking havoc in the lives of people. People have now gone ahead and divorced the frogs symbolically to end the rains. Animals, thus, not only have to contend with the vagaries of the climate, which has changed drastically owing to human activities, but also with the fallouts of human superstitions. When, one wonders, will humans own up to the error of their ways instead of blaming everything from frogs to the rain gods?

Sir — Two young officers of the Indian Administrative Service have resigned from service within a short period of time. The reasons behind giving up such coveted posts cannot be simple. Apparently their conscience forced them to resign because their job did not allow them to speak up against wrongs being done against the people by the country. Even if this is not the case, and they were unhappy with the demands — unfair or otherwise — of their posts, the issue is serious enough to deserve government intervention. It is time a committee is set up to get to the bottom of the matter. Remedial measures recommended such a committee should be implemented at the earliest if India’s brightest minds are to keep working for the people of the country.

Sir — Steve Smith is simply incredible. After scoring more than 600 runs in just four Tests, Smith is definitely standing tall in the world of international cricket. In this edition of the Ashes, he has proved to be a thorn in the side of the English team, ensuring that the urn will remain with the Aussies for now.

Incidentally, Smith is leading the run chart for 2019. It will be difficult for the Indian captain, Virat Kohli, to catch up with him and recapture his World No.1 ranking in Test Cricket.

Sir — It was heartening to watch the exceptional batting by Steve Smith in the fourth Ashes Test at the Old Trafford, Manchester. Smith, who is now ranked at No. 1 in the International Cricket Council’s Test rankings, has made an impressive comeback after being banned from playing cricket for a year.

Smith is undoubtedly one of the most accomplished batsmen in modern day cricket, especially as far as the unlimited overs format of the game is concerned. After David Warner’s persistent failure to make his mark as an opening batsman in this series, Smith should be asked to open for Australia in upcoming Test matches.

Sir — Each year, kaash and shiuli blossoms announce the arrival of Durga Puja, the biggest event in the Bengali calendar. But another marker which indicates that it is time for the ten-armed goddess to arrive with her children is the appearance of various Bengali Puja barshikis in road-side news stalls. These special editions of magazines have become an indispensable part of the festival. In fact, the book loving Bengali waits as eagerly for these Puja shonkhas as they do for the festival itself. It is really heartening to note that even in this age of e-books, the craze for Puja barshikis has not decreased among Bengalis.

Sir — Puja shonkhas of magazines are a treat. Rich in literary content, they are perfect for savouring in the comfort of one’s home, away from the Puja crowds.