Child marriage is not always a response to economic deprivation; several cases reveal individual volition, or are the result of trafficking 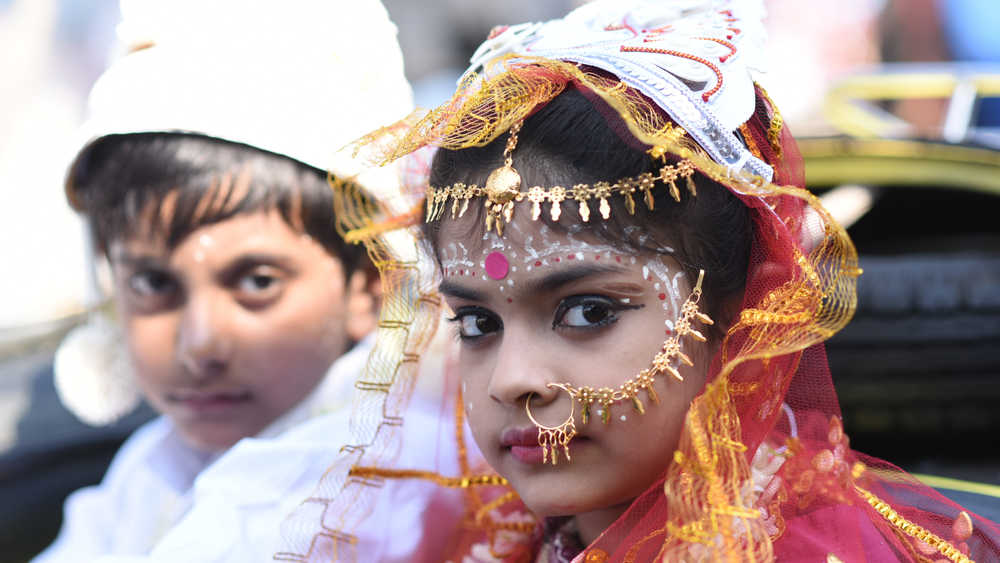 ‘Banglar meye’ is at the centre of a political campaign in West Bengal. That could well be because women, particularly school-going girls, have been the primary beneficiaries of numerous welfare schemes in the state. The first visible outcome of these targeted welfare schemes run by the Trinamul Congress government is that girls have outnumbered boys in secondary-level school enrolment in Bengal. Several independent studies of ‘Kanyashree’, and ‘Sabooj Sathi’ have revealed positive outcomes as far as enrolment and girls’ education is concerned, particularly among scheduled castes, scheduled tribes and the Muslim population.

However, recent data from the National Family Health Survey (NFHS-5) do not indicate any improvement when it comes to child marriage in West Bengal. The percentage of women aged 20-24 married off before the age of 18 remains high at 41.6 per cent. The figure was the same in the NFHS-4 report from 2015-16. In rural Bengal, child marriage, according to NFHS-5, is much higher at 48.1 per cent: the figure is 26.2 per cent for urban areas. The fact that four out of ten women aged 20-24 are married off before 18 should ring alarm bells for policymakers. A closer look at data from the districts would reveal more details about the malaise. Of the 23 districts, only nine have shown some improvement when it comes to reducing child marriage. Jalpaiguri, Malda, Uttar Dinajpur and Purulia have done particularly well. Murshidabad, Purba Medinipur, Bankura, Hooghly and Howrah have registered a surge.

Child marriage has adverse impacts on the health of the girl child as well as on human development indicators, including infant and maternal mortality. It also cuts short girls’ schooling, restricts their entry into the workforce and brings along life-long subjugation and sufferings.  In short, child marriage is a hindrance to meeting Sustainable Development Goals set for 2030.  Among these, target 5.3 specifically highlights the elimination of harmful practices, including early and forced marriage that amounts to violence against children. The question is this: despite the rise in girls’ enrolment, why have there not been a corresponding positive outcome for child marriage?

Child marriage was once considered to be an upper-caste practice that sought to protect the sanctity of caste lines. Population explosion, poverty and such other social factors made child marriage a common phenomenon. The notion of keeping family honour intact by marrying off the girl child by the age of 10 still accounts for some percentage of child marriage. Research conducted by the Tata Institute of Social Sciences (Mitra and Parasuraman, 2015) on the lived experiences of early marriage shows that ‘bad girls’ — those expressing sexual agency — are likely to be married off early to keep adolescent sexuality in control. These interventions are influenced by the notion that the value of a woman is contingent upon her ‘chastity’. Data from 2007 suggest that marriages before 14 are common among Muslims, followed by STs and SCs. Girls getting married below 18 are more prevalent among STs, followed by caste Hindus.

However, a closer look at the NFHS-5 data makes it difficult to arrive at a pattern. Significant improvement in the reduction of child marriage has been reported from Malda, Uttar Dinajpur and Purulia. These districts have Muslim and tribal representations. Similarly, Murshidabad, Purba Medinipur, Bankura, Hooghly and Howrah, which have higher mixed populations, have registered a rise in child marriage cases.

Child marriage is not always a response to economic deprivation.  Several cases reveal individual volition, or are the result of trafficking.  Deeper penetrations of social media and mobile phones seem to have had an effect on child marriage.  Covid-19 has also triggered such instances. The closure of schools and greater economic burden — the outcomes of the pandemic — have aggravated the crisis.

Greater access to secondary education should also be seen in the context of girls not pursuing higher education and their abysmal representation in the workforce. Thus, the success in girls’ enrolment will make little sense if urgent action is not taken to identify the hotspots of child marriages in West Bengal, identify their underlying causes, and ensure that girls have access to higher education and employment.