Advertisement
Home / Opinion / The run-up to elections in Bangladesh

The run-up to elections in Bangladesh 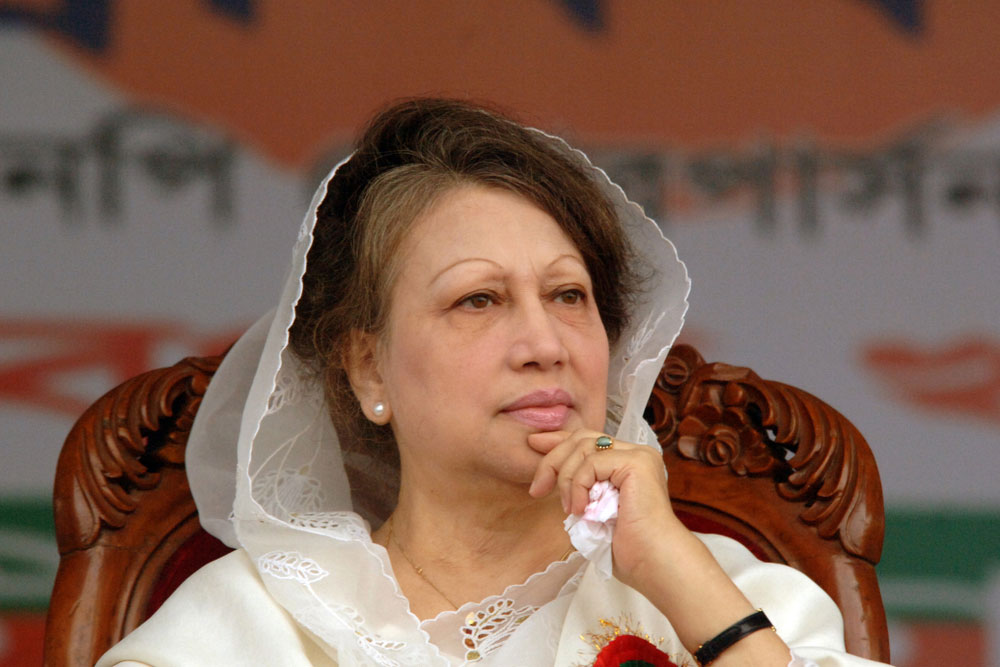 With the Bangladesh Parliament elections around three months away and much at stake for India, there seems to be a concerted effort by the Islamist Opposition in the country to project that the ruling Awami League’s defeat is imminent and it would rig the polls to stay in power. The Bangladesh Nationalist Party (which boycotted the January 2014 Parliament elections demanding a neutral caretaker dispensation to conduct them) is lobbying hard with Western countries and India to ensure a ‘free and fair poll’. Some civil society groups in Bangladesh and a section of the media have joined the campaign to force Sheikh Hasina Wajed to step down and let a neutral dispensation conduct the elections.

For those predicting a huge Awami League defeat, the recent public attitude survey by the America-based International Republican Institute came as a shock. The BNP’s immediate response was to hire a lobbying firm based in the United States of America, Blue Star, to boost its propaganda in the West. It also threatened a massive agitation if the BNP chairperson, Khaleda Zia, were not set free and if her son, Tarique Rahman, were punished in the grenade attack case, the verdict on which is to be pronounced on October 10. Sixty-six per cent of the respondents supported Wajed as prime minister and 64 per cent the Awami League for leading the government, say findings of the IRI survey. Strangely, when the national news agency, Bangladesh Sangbad Sangstha, first ran the story on the IRI survey, the detractors of Awami League doubted its authenticity, questioning why the report was not up on the IRI website. When the IRI website did put it up after two days, the silenced detractors chose to question its findings. BNP leaders described the findings as ‘impossible’ and pointed to a Neilsen report in 2012, which has predicted a BNP victory in the January 2014 polls. As if nothing has changed in six years, they also did not explain why the BNP went in for a poll boycott in the 2014 polls if it was so sure of victory. Many BNP leaders have since then questioned the wisdom of Zia and her son (who runs the party by proxy from London) of boycotting the polls and resorting to a violent campaign of firebombings of public transport that alienated the party from the people.

There is no reason to believe that the IRI, a non-profit and non-partisan outfit that works around the world to advance the cause of democracy, would have good reasons to do the Awami League a favour. It has stood by its findings and defended its sample and methodology, saying that its data was collected by using a multi-stage stratified probability sample through in-person, in-home interviews. The sample was stratified by division, by district, and by urban and rural locations.

The 33-page survey titled, “National Survey of Bangladesh Public Opinion”, said a staggering 62 per cent people believe the country was on the right path, 69 per cent people were satisfied with the current state of the economy and 57 per cent people believed that the security situation was satisfactory and would further improve in the days to come. On basic services, the government got majority endorsement as 67 per cent of the respondents said that they were happy with healthcare service, 64 per cent with the electricity situation and 61 per cent with the development of roads, highways and bridges.

A previous IRI survey of a similar kind in 2015 had also found that 64 per cent of the respondents thought Bangladesh was headed in the right direction and 67 per cent felt Wajed was the best choice for the top job.

Surveys of public attitudes in Bangladesh conducted by organizations other than the IRI have also come up consistently with similar results after 2014. A 2015 survey by the British Council, ActionAid Bangladesh and the University of Liberal Arts Bangladesh showed that 75 per cent of Bangladeshi youths see the country as a more prosperous nation in the next 15 years and 60 per cent think it is heading in the right direction. Seventy-two per cent of the respondents in that survey were positive about Wajed running the country and only 26.6 per cent respondents saw Khaleda Zia as a good choice to run the government.

But the Awami League, whose return to power is seen as vital in Delhi, knows only too well that such positives do not automatically translate into an electoral victory. Party leaders say severe factional squabbles afflict the party with thousands of aspirants lining up for nominations for the 300 Parliament seats. That is a much bigger challenge for Wajed than the Opposition, which has little achievement to show during their rule against the substantial economic and social progress of the last 10 years.