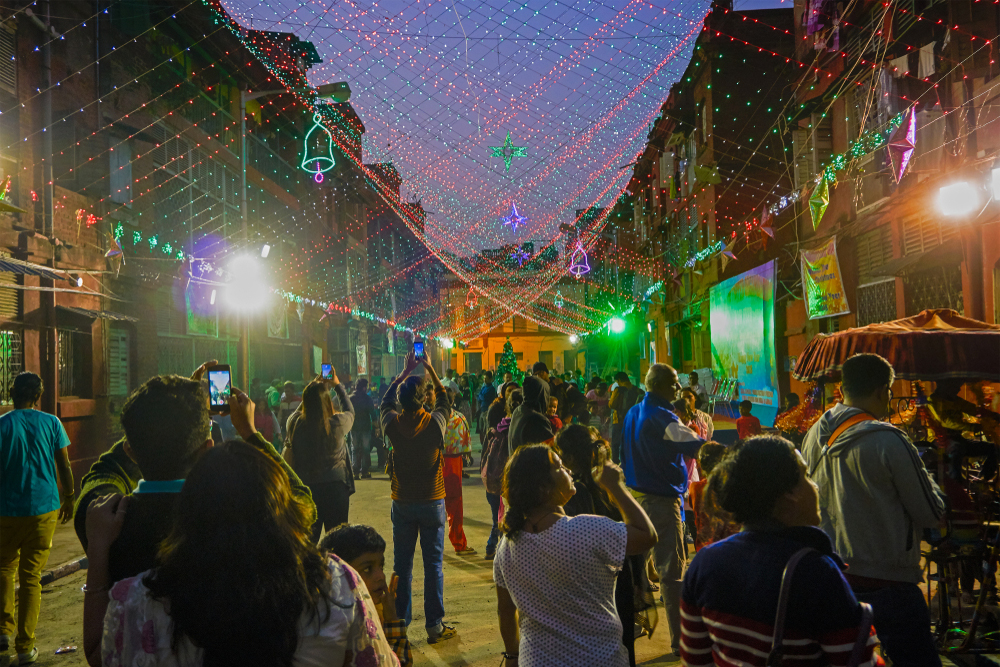 Christmas celebrations in Calcutta's Bow Barracks. Any injury to Anglo-Indian rights injures the nation for, like the schools, the community is all-India, spread across the length and breadth of this country
(Shutterstock)
Sunanda K. Datta-Ray   |   Published 10.01.20, 07:52 PM

Ravi Shankar Prasad’s claim of only 296 Anglo-Indians must be contrasted with Chakravarti Rajagopalachari’s perceptive comment that most educated Indians are “Anglo-Indians”. Like Han Suyin, he meant that real Eurasians are not of mixed blood but mixed culture. These “Third Culture Kids”, as sociologists call them, are multiplying as more and more people worldwide try to escape suffocating ultra-nationalist straitjackets for cosmopolitan liberation.

That is what the Constitution (126th amendment) bill seeks to suppress. Abolishing Anglo-Indian legislators is probably the first step, the true long-term target being the hugely popular Anglo-Indian schools on which the authorities dare not mount a frontal attack. With few Anglo-Indian principals and teachers left and fewer Anglo-Indian pupils, the schools are rather like the Cheshire Cat’s disembodied grin. But they serve a vital national need by ensuring that a large section of India’s elite (though signally excluding most politicians) has no truck with ignorant mumbo-jumbo about stem-cell, plastic surgery and aircraft being common among ancient Hindus. Sangh parivar zealots must find Macaulay’s justification — “No Hindu who has received an English education ever remains sincerely attached to his religion” — for his famous Minute as offensive as the Minute itself.

The anguish that Barry O’Brien, president-in-chief of the All-India Anglo-Indian Association, expresses must therefore be shared by every modern Indian. After the turbulence in Jamia Millia Islamia and Jawaharlal Nehru University, no one will be surprised if restrictions are imposed on these schools so that the last nail is eventually hammered into the coffin of Gandhi’s hope of the culture of all lands blowing freely about his house. Instead of inciting students to hold the country to ransom over the Citizenship (Amendment) Act, Opposition politicians should educate them on the 126th amendment’s threat to progress.

Whatever its sectarian inspiration, the CAA is an act of humanity that promises belated justice to Partition’s humblest and most neglected victims. Citizenship will bring few material benefits to these one-time shopkeepers, cultivators and fisherfolk evicted from Pakistan. They learnt long ago to fend for themselves. Nor will their formal assimilation have any impact on society at large. But as the protest to Pakistan’s New Delhi representative over the desecration of Gurdwara Nankana Sahib and the murder of a Sikh in Peshawar confirms, even symbolic gestures are sometimes essential. The 16 Anglo-Indian legislators (14 in state assemblies and two at the Centre) cannot in any way impede the Bharatiya Janata Party’s steamroller advance. But being Christian and native speakers of English, they are outsiders in what the Rashtriya Swayamsevak Sangh undoubtedly regards as the mainstream of Indian life. Their presence in the legislative process is reassuring evidence that India is not yet an RSS akhara writ large.

That recalls one day many years ago in the Calcutta Vidhan Sabha press box when I was startled at suddenly hearing a spurt of familiar Anglo-Indian English amidst the Bengali hubbub. It emanated from the well of the house. To my astonishment, the speaker was Bill Noney, who had once been my paper’s highly valued correspondent in East Pakistan where Bengalis affectionately called him “Noni Babu”. Forced out by the military regime, Bill had gladly taken up a neglected aspect of newspaper production and become a sub-editor. But he had retired recently, and gone to Australia. Or so I thought.

Fate had intervened. The slip between cup and lip can sometimes bode well. The story I heard was that Jyoti Basu had telephoned just as he was about to fly to Australia inviting him to join the assembly. Usually, nominees were headmasters of prestige schools where upper class Indians sent their sons. So, how was Noney singled out? The answer was that when Harry Pollitt, veteran general-secretary of the Communist Party of Great Britain, visited Calcutta and addressed a Maidan rally, Basu wanted a record of the speech. Pollitt wasn’t just any old Tom, Dick or Harry. We know from Nikhil Chakravartty he was responsible for the Communist Party of India’s sudden change of stance on World War II. In December 1941, Pollitt sent the CPI the Comintern’s directive that all communists should support the Soviet Union’s war against Hitler as the People’s War. “Overnight, the CPI leadership fell in line with the Comintern as per the Pollitt letter.” Noney was the only reporter there able to transcribe an English speech in shorthand.

His was the world’s voice in the West Bengal assembly, as Frank Anthony’s had been in the Lok Sabha. Even their token presence helped to shore up the idea of India. Purging them will clear the way to elevating mythology above science and letting ideology shape history. Muslims will be lynched with impunity in the new dispensation and the dominant party’s stormtroopers be free to attack university campuses to enforce total obedience. The Left will be denounced for treason and dissent branded as sedition. The long-term effect on Anglo-Indian and English-medium schools could be disastrous. The impact on India as a whole calamitous.

The exponential growth of these schools, especially their popularity with other communities, means that millions of Indians can follow any religion they like or none. Being English-speaking, pupils can slip easily into a lifestyle that is the hallmark of success in India today. Far from being marks-obsessed crammers, they stress the importance of extra-curricular activities. Ann Selkirk Lobo, an Anglo-Indian writer in Britain, implies that to the extent that these schools take Hindu and Muslim children into the world, they also keep Anglo-Indians out of it. “Indian students attending Anglo-Indian schools become bilingual in an Indian language and English. Anglo-Indians remain monolingual in English and are ineffective communicators in an Indian language.” While providing a stepping stone to the great world beyond for “wealthy and influential non Anglo-Indians who want their children to acquire fluency in English”, these schools reinforce the “legacy for subordinacy” with which the British crippled those for whom they were originally intended.

The abolition of Anglo-Indian legislators two weeks from now is all the more sinister for being so sudden as to be almost surreptitious. O’Brien’s protest to the prime minister points out that the decision was taken without consulting or even informing the people directly concerned. No justification was cited. “What is the reason behind taking such a step?” he asks. “What facts and figures, data and research material have been collected and collated, based on which the cabinet has taken its decision?” He might have added that a government that exploits its brute majority to push through measures without explaining why to the people is a danger to civil rights and a menace to democratic governance.

Any injury to Anglo-Indian rights injures the nation for, like the schools, the community is all-India, spread across the length and breadth of this country. “We have documentary evidence that Anglo-Indians live in varying numbers in as many as 22 of the 28 states and nine Union Territories of India,’’ O’Brien affirms. “No single state is our home! We are proud to say that ALL of India is our home!” But even making allowance for his activist brother, the Trinamul Congress’s Derek, the community is utterly and absolutely apolitical, besides being easygoing and tolerant. Even the official description “Anglo-Indian” covers a wide swathe of European and Asian races.

That universalism is what makes them especially dangerous to faddists and fanatics in relentless pursuit of a Hindu rashtra. When Anthony or the author, Margaret Deefholts, talked of Britain’s “betrayal”, they meant the raj’s refusal to allow people of mixed blood equal opportunity. Today, the word refers to the far worse crime of denying millions of ordinary Indians the right to choose an alternative lifestyle of which the genial Anglo-Indian is the most obvious and endearing symbol. As a nun observed at Tuesday’s Anglo-Indian conference in Calcutta, the future looks “scary”.