Letters to the Editor: Norwegian authorities deciding to euthanise a walrus

Readers write in from Chennai, Sholavandan, Ujjain, Mumbai and Calcutta 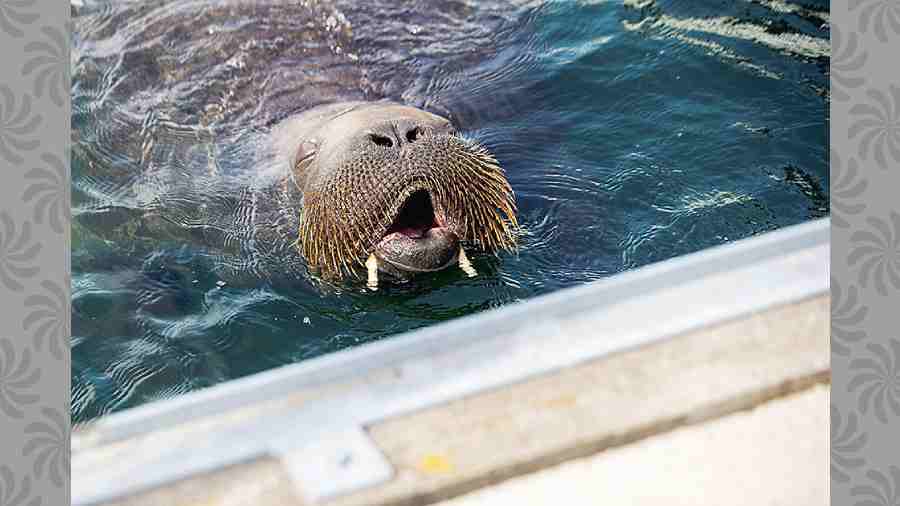 Sir — Animal lives matter too. Yet, earlier this week, the Norwegian authorities took the decision of euthanising a walrus, Freya, insisting that she posed too big a threat to humans who failed to heed repeated warnings about staying away from her. The director-general of the Norwegian directorate of fisheries has said that while they have great regard for animals, the safety of humans must take precedence. This betrays a hierarchical attitude towards non-human species. Those who delighted in Freya’s antics saw her as an adventurous being — she was sighted in Dutch, Danish and Swedish waters, among other places. It is tragic that Freya’s life had to come to an end simply because human beings cannot follow safety rules.

Sir — The Federal Security Service of Russia has reportedly detained an alleged Islamic State suicide bomber, Azamov Mashrabkhon. He is an Uzbek national and was apparently planning to fly to India to attack a key politician from the Bharatiya Janata Party. This is a matter of concern. The suicide bomber has revealed that he was instructed to travel to India to avenge the disparaging remarks about Prophet Mohammed by members of India’s ruling party. The Centre must take note of this development and heighten security measures; lives of Indian citizens are at stake.

Sir — The detention of Azamov Mashrabkhon must act as a wake-up call for the BJP. The IS suicide bomber was recruited because of the faux pas of Indian leaders. The government must remain on high alert for the foreseeable future.

Sir — In 1988, India became the first country to ban the controversial book, Satanic Verses, by Salman Rushdie in order to placate religious sentiments. Over three decades later, the Centre has remained silent on the brutal attack on the author. The external affairs minister, S. Jaishankar, too, gave a lukewarm response when asked about the incident.

In contrast, the Indian-origin British prime ministerial candidate, Rishi Sunak, has condemned the attack in the harshest terms. He said, “The brutal stabbing of Salman Rushdie should be a wake-up call for the West, and Iran’s reaction to the attack strengthens the case for proscribing the IRGC (Islamic Revolutionary Guard Corps).” The question before the Indian government now is whether it considers the attack on Rushdie as a threat to freedom of speech and expression. India must make its stance clear.

Sir — The attack on Salman Rushdie has compelled us to reevaluate our commitment to freedom of expression. While many have privately condemned the incident, they were reluctant to take a public stand. This speaks poorly of the Indian intelligentsia.

Sir — The Union home minister, Amit Shah, reiterated his resolve to root out Naxalism from areas affected by it during the 23rd Central Zonal Council meeting. It is good that the government has taken a strong stand on the matter. Shah has said that the development schemes of state governments will help the people of the region and bring down the rates of recruitment by insurgents. One hopes that the people living in these regions can build a safe future for themselves.

Sir — The Indian men’s cricket team must be congratulated for winning the one-day international series 3-0 against Zimbabwe. While the first two matches were comparatively one-sided, the third was closely fought. The Zimbabwe team, too, must be lauded — the bowler, Brad Evans, had an excellent outing with 5-54 in the final match. But it was Shubman Gill who stunned everyone with his maiden ODI century. Hopefully, we will get to watch Gill play more frequently.

Sir — It was heartbreaking to learn that four children died and 11 were seriously injured in a road accident near Nagda in Madhya Pradesh. Many of the private vehicles taking children to schools work on strict schedules. The service providers try to cram in as many trips as possible, often encouraging drivers to go over the speed limit. State governments must strictly regulate such services and hold them accountable in case of mishaps. We must prioritise the safety of children.

Sir — Erratic rainfall has damaged crops immensely this year. The prices of vegetables have shot up — even doubled for some items — and will likely increase further if the current cyclonic circulation over the Bay of Bengal continues for another week. A significant amount of horticulture crops have been washed away by the floods. The government must assess the extent of the loss and immediately release funds to compensate farmers affected by the floods.

Sir — Torrential rainfall in Himachal Pradesh has triggered landslides and killed more than 20 people. This is one of many instances of flooding that have been reported this monsoon. Global warming has led to increased instances of extreme weather conditions. Governments must now prepare accordingly and build resilient infrastructure to help save human lives. Hill states, such as Himachal Pradesh or Uttarakhand, should adopt a zero-tolerance policy towards unsustainable human activities to minimise the recurrence of landslides.