Anger against the medical community has built up over years

However, disrupting the functioning of medical facilities is inexcusable 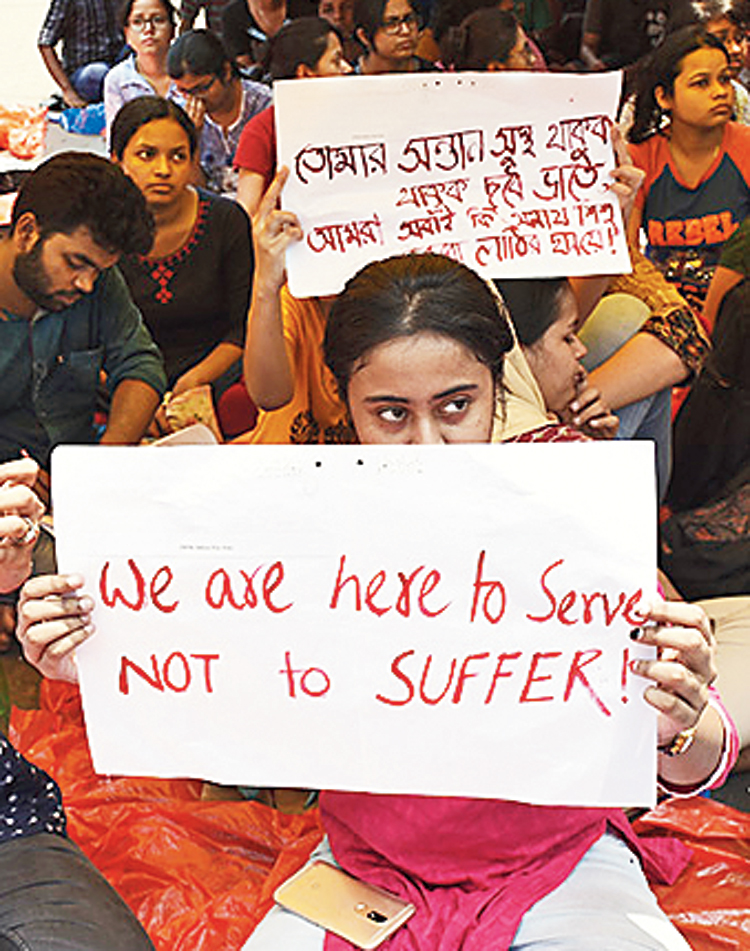 Sir — The recent instances of violence in various medical facilities across West Bengal began with the death of an elderly patient who was undergoing treatment at the state-run Nil Ratan Sircar Medical College and Hospital in Calcutta. Hooligans allegedly flocked to the hospital and attacked doctors. A junior doctor sustained a serious head injury and was then admitted to the intensive care unit. Subsequently, the junior doctors went on a strike across the state to protest against the attack. Although the strike was called off yesterday after the chief minister addressed the concerns of the agitating doctors in a meeting at Nabanna, a large section of hapless patients and their relatives were highly inconvenienced during the past week.

The attackers who have reportedly been arrested should not be let out on bail anytime soon. Keeping them in custody should act as a deterrent for others who think they can indulge in violence sans retribution. After all, this is not the first time that such an incident has taken place. If the entire cycle of events is analysed, it becomes clear that the death of the patient, allegedly caused by medical negligence, served as a trigger in what is a larger problem. The primary reason for such attacks seems to be a whole lot of anger against the medical community that has built up over many years. Disrupting the functioning of medical facilities is inexcusable because it leads to patients suffering even further.

Sir — The editorial, “Other voices” (June 17), is right on point. Any attack, whether on doctors or on any public servant, should be punished without delay. Even elected representatives or their political henchmen should not be spared if they are found guilty on such counts.

Sir — The number of attacks on doctors seems to be on the rise, especially in government hospitals. Violence of any kind must be condemned. The protests by doctors should be seen as an indication of the poor working conditions in government hospitals. Patients are often taken there when they are in a critical condition. In such situations, they are unlikely to survive in spite of the doctors’ best efforts. In medicine, there can be no guarantees beyond a certain point.

Besides, public hospitals are mostly overcrowded, understaffed and ill-equipped in terms of infrastructure.

However, one cannot fully condone the strike that the junior doctors went on. One must keep in mind the plight of poor patients for whom government hospitals are the only way they can access medical care. It is time that governments start improving the conditions of these hospitals by appointing more doctors and paramedics, and making essential medicines and medical equipment easily available. Above all, security must be provided to hospital staff.

Sir — Rowdy crowds entering hospitals and beating up doctors have become a regular feature in West Bengal. If there are any grievances against the treatment provided at hospitals, there are mechanisms for redressal that can be considered. Resorting to hooliganism is not the answer to the problem. The doctors had every right to go on a strike seeking protection. Unfortunately, the patients had to bear the brunt of the ensuing chaos.

The delayed action on the part of the state government has been puzzling. The culprits should have been dealt with sternly in the first place. Not only would this have served as a warning, but it would also have assured the doctors that such misbehaviour will not be tolerated.

Sir — In the 70 years of my life, I have keenly observed several doctors’ strikes in the country. What stands out in all such cases is the stand taken by political parties depending on whether or not they are in power. The ruling party always condemns such strikes, but when the same party is in the Opposition, it supports them. Almost all strikes affect ordinary citizens the most. This one was no different.

Sir — At least 218 leopards have died in India in the first four months of this year. This is appalling, given that the count exceeds last year’s death toll by over 40 per cent. All the more disconcerting is the fact that apart from the deaths caused by accidents on roads and railway tracks, the big cats are mostly killed by human beings — they are trapped in wells, beaten or shot. While the local people are usually to blame — leopards often stray into human settlements on account of their habitats disappearing — the government should be held accountable for failing to protect this vulnerable species.