Advertisement
Home / Opinion / And over Or

The relationship between science and religion 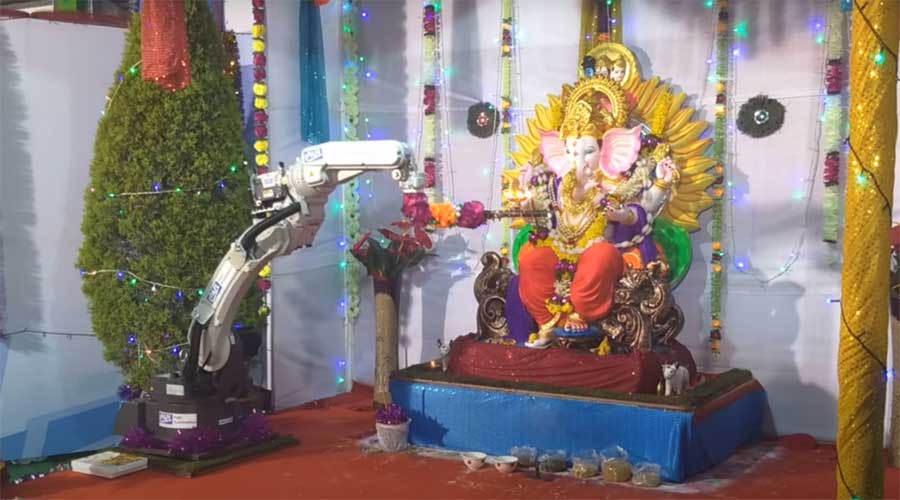 Despite some attempts by religion to reach out to science, the latter has maintained its original stand. A robot performing Ganpati aarti
YouTube - BK Divine Songs
A. Raghuramaraju   |   Published 06.07.20, 12:04 AM

Is accepting modern science tantamount to rejecting religion? It would appear, at first glance, that the relationship between science and religion is predominantly governed by ‘Or’. Science will only recognize that which is validated, has proof, and is invariant and objective. It denies what is not visible, like god. Science does not merely accept what is perceived by the naked eye but requires verification by instruments. For instance, Galileo relied on the telescope to substantiate his claim to the Church that the sun, and not the earth, is at the centre of the solar system, as claimed by his predecessors like Ptolemy. Science does not accept any ultimate truth. The non-acceptability is applicable even within science where theories are accepted until they are rejected and replaced by alternative theories. This inherent open-mindedness is what distinguishes science from religion, which centres around the idea of ultimate truth. With the progress and increasing legitimacy of various branches of science, religious faith in the West has long been at the receiving end of scientific scepticism. Despite some attempts by religion to reach out to science, the latter has maintained its original stand and stuck to its critical and objective approach. This is the dominant model. I call this the Or-formula, where accepting one is tantamount to rejecting the other.

However, the Or-formula has been contested by modern Indian thinkers like Swami Vivekananda and Sri Aurobindo. They offered, in my reading, an alternative — namely, the And-formula — to define the relationship between science and religion or spiritualism (religion and spiritualism are used interchangeably and at times loosely by them). At first glance, this formula looks either shallow or, at best, a bold attempt. However, on a closer reading of the writings of Vivekananda and Aurobindo, we find two kinds of justification in support of their formula: one, the overlapping, continuity, or commonalities between science and religion; two, the incomplete nature of science.

Vivekananda points out that the Vedas and modern science have some essential things in common. Science, like the teaching of the Vedas, claims that ‘creation is without beginning or end’ and proves that the ‘total of cosmic energy is always the same’. Vivekananda also asserts that there is harmony between the Indian theory of evolution and Western science, dispelling any notion of conflict between the latter and Eastern religions.

However, while the concept of involution was recognized by ancient Indian sages, this had somehow eluded the attention of modern science. This incomplete nature of science can be fulfilled by Indian spiritualism, feels Vivekananda. In this exchange, he envisages that “[s]cience and religion will meet and shake hands”. Reinforcing the need for the West to borrow spiritualism from the East, he says that “The whole of Western civilisation will crumble to pieces in the next fifty years if there is no spiritual foundation.”

Following the same formula, Aurobindo pointedly identifies the limitations of Darwin’s evolutionary theory and claims that Vedanta can help in overcoming these. Similarly, there are limitations within the traditional Indian worldview too. For instance, Indian philosophers neglected the physical world. Their knowledge was ‘confined to a few’, and did not spread to the ‘whole mass of humanity’. The achievements of Indian philosophers and modern science are, therefore, only ‘half achievements’, and they look at the ‘same reality’ from ‘opposite sides’. These two parts ‘will meet from two opposite sides and merge in each other and find in the life of a unified humanity a common world culture.’ In spite of his outright rejection of Hinduism, B.R. Ambedkar’s embracing of Buddhism also indicates his inclination towards the And-formula. Although in his case, it is liberalism and Buddhism.

Having identified these two formulas, let us draw up a sociological description by exploring the role they play in people’s lives. This will help provide a better picture of modern society. The Or-model as we know is predominant in the modern West. This is evident in the response of the renowned mathematician and physicist, James Clerk Maxwell, to the Victoria Institute, which sought to establish a common ground between Christianity and science. In spite of growing up in a religious family, Maxwell wrote, “… I think that the results which each man arrives at in his attempts to harmonise his science with his Christianity ought not to be regarded as having any significance except to the man himself, and to him only for a time, and should not receive the stamp of society.” One can thus see the domain of religion receding fast, for instance, to the limited domain of ‘man himself’ with the growing legitimacy of science. Scientists perceived religious beliefs to be embarrassing, as obstacles to scientific progress.

In contrast, we see the prevalence of the And-model in India. Many modern educated Indians, including scientists and engineers, do not find it necessary to reject religion, or hide it from others, nor treat it as faith, personal belief or even family practice. In fact, they do not hesitate to display this ‘And’ character even publicly. While religious beliefs become obstacles to scientific growth in the Or-formula, religious practice in India, especially the routine in daily life, bringing discipline and considerably curtailing the tendency to distract, seems to have actually contributed to the educational and professional growth and achievement of scientists in India.

The physicist, C.V. Raman, and Srinivasa Ramanujan, mathematician par excellence, found no dichotomy in maintaining their religious beliefs alongside the deeply scientific nature of their work. Ramanujan even claimed a close, direct relationship between his mathematics and the deity, Namagiri, thus posing a serious challenge to the Or-formula. G.H. Hardy is a famous mathematician, a generous mentor of Ramanujan, a radical and hardcore atheist. His relation with Ramanujan brilliantly reveals the tension, professionalism and creativity between two scientists, one atheist, the other a strong and total believer in religion. The And-formula provides a theoretical basis and a better description of modern Indian society.

However, our lives have aspects that belong to the scientific domain and yet lie outside it. At times, they even overlap. Followers of science, surrounded by reductionism, are often handicapped in dealing with those aspects that fall outside its domain. While objectivity and validation form the basis of science, the extent of the scientific domain is limited. Science has no direct explanation for the vagaries of life or human quirks — unexpected suffering or fortune, emotional upheavals, morality or even the aesthetic appreciation of the arts. For instance, at the aesthetic level, our ability to enjoy Rabindranath Tagore’s poetry or Vidushi Kishori Amonkar’s rendering of Raga Bhoopali is not guided by science. The tension between these reminds us of those insightful lines from Tagore — “Alas, a jeweller has come into the flower garden! He wants to appraise the truth of a lotus by rubbing it against his touchstone.”

Further, in the realm of ordinary life, is it possible for ordinary people to live a life completely devoid of ultimate truths? As the protagonist in Bertolt Brecht’s The Life of Galileo asserts, it is not the job of science “to throw open the door to infinite wisdom but to put a limit to infinite error”. Is it viable to live a life with relative truths? So, areas that lie outside science stare at it, at times grudgingly.

However, a major limitation of the And-formula is its inability to clearly explain the nature of the conjunction between science and religion. How the two halves are to be related and conjoined. The process of unifying two parts, or shaking hands as proposed by Aurobindo and Vivekananda, respectively, needs detailed discussion. This is necessary given the predominance of this combination in India. Otherwise, there is a danger of the And-formula relapsing into chaos or becoming messy.

Interface of Science and Religion