Did it again: BJP's arrogance & over-confidence

Mr Shah appears a little jinxed as far as Bengal’s iconic statues are concerned, thus offering on a platter meat for Mamata's appellation of ‘outsider’ 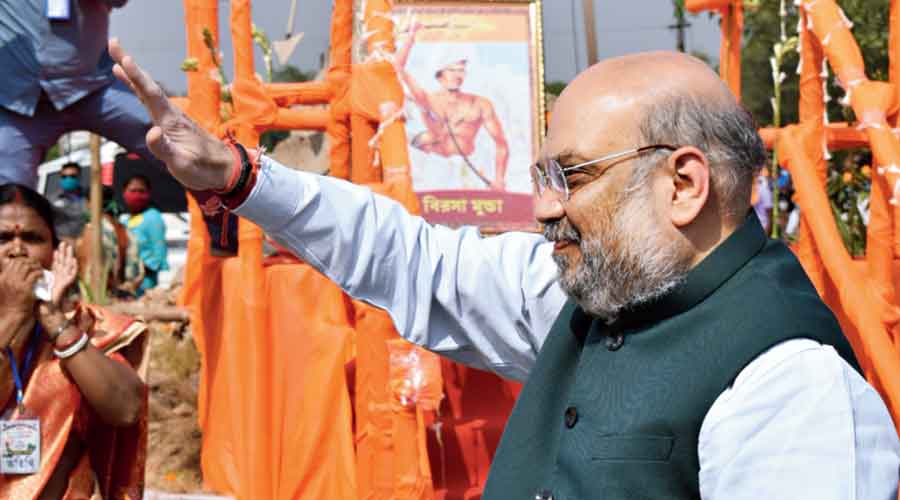 The combination of over-confidence and ignorance can have unfortunate effects. On one level, the fact that the Union home minister, Amit Shah, in his upbeat tour of Bankura ahead of the West Bengal assembly elections in 2021, paid tribute to the statue of a nameless tribal hunter under the impression that it was a statue of Birsa Munda, the anti-colonial leader, was simply comic. To be fair, the fault was not Mr Shah’s, but of the district leaders of the Bharatiya Janata Party. They would be expected to know better, since a large slice of the BJP’s gains in West Bengal in the 2019 Lok Sabha elections came from the state’s tribal belt. One of the notable attributes of the party is its excess of confidence; Bankura’s BJP leaders obviously did not bother to acquaint themselves with the statue of the iconic leader. It was not comic at all that the people felt insulted at this show of disrespect; the BJP’s efforts to gloss over the gaffe by hurriedly placing a picture of the hero at the foot of the anonymous figure did not help — some considered it more disrespectful. But over-confidence is transgressive. The BJP chief in Bengal, Dilip Ghosh, has said that since the home minister believed the statue to be Birsa Munda’s, it will be so known from now on.

That is paying tribute to Mr Shah, not Birsa Munda. It worsens the harm done by careless disrespect and is like history repeated. Mr Shah could not have been directly blamed either for the destruction of Ishwarchandra Vidyasagar’s statue in a Calcutta college in 2019, allegedly by his party’s followers, during a BJP roadshow he was leading before the general elections. There does, however, appear to be a relationship between the aggressive rhetoric of the potential conqueror and ignorance of the culture and history of the state to be conquered. The BJP, of course, was not as careless while erecting Vallabhbhai Patel’s statue in Mr Shah’s home state. Mr Shah appears a little jinxed as far as Bengal’s iconic statues are concerned, thus offering on a platter meat for the West Bengal chief minister’s appellation of ‘outsider’. The idea of a cultural outsider could be a useful weapon in the Trinamul Congress’s favour.