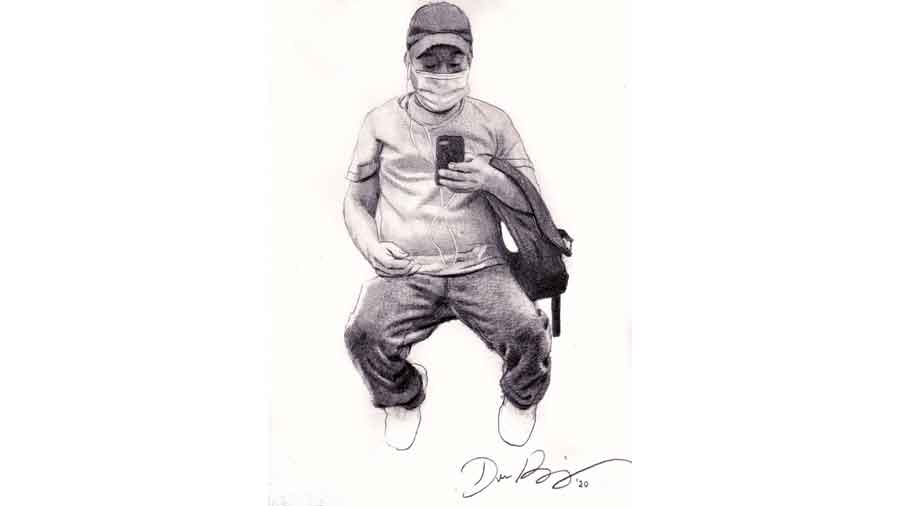 During the pandemic, using the subway and other forms of public transport has taken on a different meaning. People are generally apprehensive as they try to socially distance themselves from others on their commute. The subway system is the lifeline of New York City. An artist’s work recently brought both him and his subway art into the spotlight.

As part of his Subway Series started in 2010, Devon Rodriguez has been drawing pictures of strangers sitting on the subway. About six months ago his popularity skyrocketed and his Instagram followers went from around 30,000 to almost two million. He soon started a TikTok account showing himself creating his art and how he completed his first coronavirus drawing. It quickly garnered millions of views.

Rodriguez said he primarily relies on the 6 train for his drawing, illustrating about one per week. Recently most of his subjects have been drawn with masks on their faces. Even though trains are emptier now, his artwork captures the current situation and the journey over the past months as Covid-19 ravaged NYC.

The New York governor, Andrew Cuomo, mentioned Rodriguez’s artwork during one of his daily Covid-19 updates. Rodriguez also sells his subway drawings on his website. As of now, the NYC subway is about 70 per cent less occupied compared to last February, right before the pandemic sanctions began.

A worldwide exhibition displaying the artwork of Vincent van Gogh has been gaining popularity; it stopped by in Chicago on Feb 11. It was originally slated to end after a month, but on account of high ticket sales and success it has been extended till September. The exhibition made its debut last summer in Toronto and is meant to be an immersive ‘experience’. It takes 400 van Gogh paintings and then projects them onto the walls and corners of the interior of the 500-cubic feet venue. The walls, columns and floors become the canvas for the artwork. In addition, the paintings are brought to life through animation, such that “sunflowers are blowing in the wind, stars are twinkling and clouds are moving by,” as said by Corey Ross, the exhibition producer, to Time Out.

The gallery is following Covid-19 safety protocols for the audience. In fact, it uses the overhead projectors to create ‘viewing circles’ on the ground to remind people that they must stick to those areas in order to socially distance inside the building. The latter has 35-feet-high walls and plenty of space to accommodate both the projected paintings and also the accompanying lights and music. The whole visit is an hour-long walk-through, with hand sanitizer stations along the way. The exhibition will also go to Los Angeles in May and to NYC in June. Tickets will go on pre-sale next month and are expected to sell out fast.

Learn about the past

Black History Month is wrapping up, but it is important to keep the conversation going beyond February. To celebrate black history, a new self-guided walking tour just launched in Brooklyn and Manhattan that takes you through 11 historic sites. Some of the stops include the African Burial Ground National Monument downtown as well as the neighbourhood of Weeksville in Crown Heights that was established by freed black Americans in 1838 and discusses the 1863 NYC riots and the dark side of New York’s history. The film and audio tour is called ‘Fighting Dark’ and can be streamed for free online as well.

Another way to educate people on black history is through food. Two restaurant owners in Chicago and Detroit are offering special takeout boxes with illustrations and texts describing significant historic moments and social justice lessons. The restaurants are selling their food in shoe boxes owing to their historical significance. During the segregation era, black women were not allowed to eat in the dining cars of trains and thus packed their meals in shoe boxes.

There are two information boxes. The ‘Jim Crow’ box highlights historical black figures such as the baseball pitcher, Satchel Paige, the aviator, Bessie Coleman, and the Nasa engineer, Katherine Johnson. The ‘End Racism’ box depicts recent events such as the tragic death of Breonna Taylor. Spotify also launched a guest-curated list of podcasts and playlists to highlight black culture and excellence. The hub, ‘Black History is Now’, consolidates all the content and can be found on the app.

An unprecedented winter storm has ravaged most of Texas, destroying a power grid and leaving millions without electricity and water supply. People have been burning their personal belongings to stay warm and melting ice from outside to get water. Alongside donations to homeless shelters and food banks, local joints are also stretching themselves to help their fellow Texans. Domino’s Pizza in San Antonio was the only pizza place that stayed open to help out those in need. An image went viral showing its exhausted workers who sold all the food in four hours and garnered several thousand comments, with people noting the burden imposed on fast food workers.

At the H-E-B grocery store in Leander, Texas, people were rushing to stock up on food and supplies to prepare for the winter storm. The store was crowded, and the power suddenly went out. Instead of making the customers pay, the H-E-B staff just let everyone leave with their groceries and supplies. Their generosity quickly went viral.

The Texas senator, Ted Cruz, an avid Donald Trump supporter, came under fire after being caught catching a flight to Cancun, Mexico in the midst of the devastating storm. He had a booking at the Ritz Carlton to stay with his family. After the backlash, he was seen booking a flight back immediately.

New Yorkers are familiar with the voice on the subway warning passengers to “stand clear of the closing door”. Now, the Metropolitan Transportation Authority is bringing in 25 new voices, including those of Jerry Seinfeld, Whoopi Goldberg, Debi Mazar and Fran Lebowitx. The MTA said it provided a general script but encouraged the celebrities to improvise. To hear their voices, you have to ride the subway or the bus; just keep your mask on!