Penguins on the loose 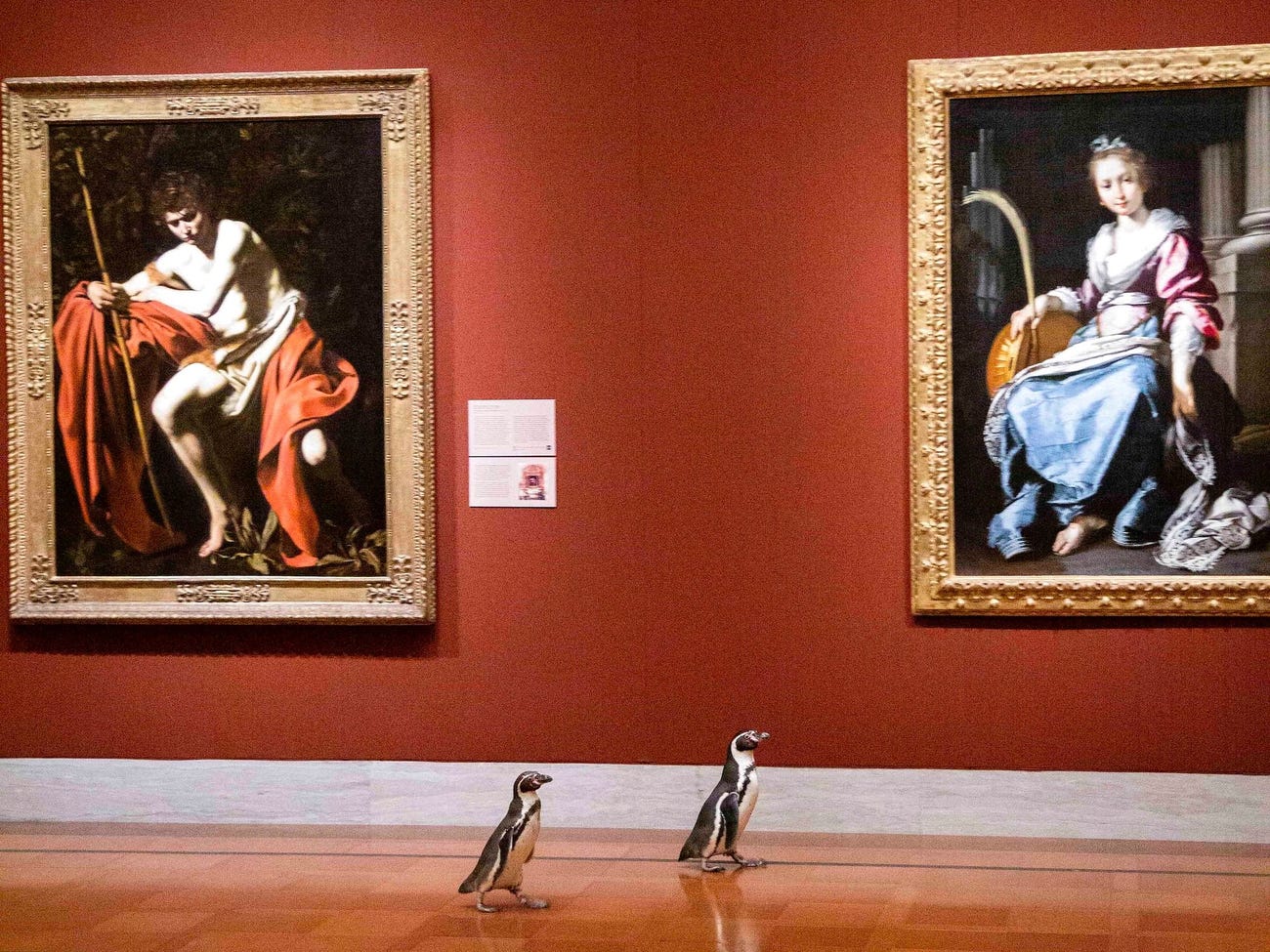 While all of us can enjoy tours of museums and zoos virtually from our homes, some animals get to enjoy them up close. On May 6, three penguins from Kansas City Zoo strolled through the halls of the Nelson-Atkins Museum of Art, located in Kansas City, Missouri, viewing artworks by Impressionist and Baroque artists. The zoo took three of their Humboldt penguins — Bubbles (5 years), Maggie (7 years) and Berkley (8 years) — to the nearby museum.

The museum and the zoo had examined the galleries before the animals’ visit to make sure that it was safe for both the birds and the artworks. “Humboldt penguins in human care can live well into their thirties. In the wild, Humboldt penguins are facing habitat loss and suffering from overfishing which depletes their food sources,” said a Kansas City Zoo spokesperson to reporters at Time. “Unfortunately, our penguins can’t speak for themselves, but we think they found the experience at the museum very enriching!”

While the Shedd Aquarium in Chicago was closed to visitors, it allowed its own penguins to roam about and visit other animals. The penguins, Tilly and Carmen, visited the aquarium’s polar exhibit and came face-to-face with Kayavak the Beluga whale, the Shedd said in a tweet. This was likely the first time the whales had ever seen a penguin. While Beluga whales live in the Arctic Ocean in the Northern Hemisphere, penguins are native to the Southern Hemisphere. The Shedd Aquarium started sharing footage of its animals taking ‘field trips’ to other exhibits after it temporarily closed on March 13.

During the pandemic, one type of business that is in demand is the food delivery service. People are stuck at home, and with restaurants only open for take-out, they resort to delivery apps such as Grubhub, Uber Eats and Seamless. However, the biggest point of contention is how to allow them to operate. Uber Eats is set to purchase Grubhub, but is facing limitations of its own. Jersey City imposed a 10 per cent cap on delivery fees, prompting Uber to add a three-dollar surcharge to all orders from the municipality. In response, the Jersey City mayor, Steve Fulop, called Uber “a terrible company that only cares about corporate profits”. New York City passed a temporary bill capping commissions, typically around 30 per cent with Grubhub or Uber Eats, to 15 per cent for delivery and limiting marketing and other related fees to 5 per cent.

There is no clear winner here. While the apps increase their rates, restaurants too are raising prices to cover their cost of delivery directly. Consumers are having to pay more for food, and ultimately the drivers are still paid below-average wages, with no benefits.

Last week, a lawsuit, headed by Colorado restaurant, Freshcraft, was filed against Grubhub. The lawsuit alleges that Grubhub created a listing for Freshcraft on its website even though the restaurant had never signed up for the service. The listing showed the restaurant as closed and not taking orders even though it was open and taking online orders on other platforms. The listing then directs Grubhub users to other restaurants that are enrolled on its site. In spite of the addition of fees, delivery apps have failed to achieve profitability.

For the first time, several people were forced to spend Mother’s Day without their mothers or children. Health officials warned people not to gather in large crowds. “Resist the temptation to hug your mom and maintain six feet of separation,” the Louisiana Department of Public Health said. On Mother’s Day, flower shops thrive the most. The chief executive officer of the Society of American Florists, Kate Penn, told Business Insider that flower shops can rake in as much as 15 per cent of their annual sales through Mother’s Day alone. But travel restrictions have stopped the import of flowers from international countries. At Miami International Airport, the port with the highest volume for the import of cut-stem flowers, imports have fallen by approximately 280 million stems to just under 700 million stems since the start of April compared with the same period in 2019, reported a Customs and Border Protection spokeswoman.

The home goods chain, Lowe’s, donated $1 million worth of flowers to nursing homes around the United States of America this Mother’s Day. The flowers were provided by small business growers and nurseries that Lowe’s said may have experienced slower business amid the pandemic.

While lockdown restrictions are eased, governments are still enforcing social distancing in public areas. However, with summer having started, people are flooding to parks and beaches. Domino Park in Brooklyn devised a creative way to help people keep their distance of six feet by painting white circles on the ground, with a limit of one family per circle. Police officers present not only enforced the measures but also provided masks.

Some national parks have also started opening, but things will not go back to normal. Major parks will be understaffed. One might not find a ranger to ask for guidance or directions. At Yellowstone National Park, trails, boardwalks and bathrooms will be open, but not campgrounds, ranger programmes and visitor centres. Authorities at summer camps for kids will be expected to regularly monitor campers and staff for symptoms of Covid-19. The Centers for Disease Control and Prevention has issued its guidance for camps, recommending social distancing, screening and extra disinfecting. Camps also have to follow state and local laws. But in most cases camps are still waiting to hear what those will be, growing frustrated by the lack of information to help them make their decisions.

While people are studying different ways to fight the coronavirus, the Magnolia Bakery in New York seems to have come up with a futuristic method: using ultraviolet light. Customers at the Upper West Side shop will soon have to step through a sleek, futuristic looking ‘Cleanse Portal’ and slowly turn 360 degrees to get sanitized for 20 seconds with far-UVC. The system will ensure that employees are sanitizing on their way in and out.