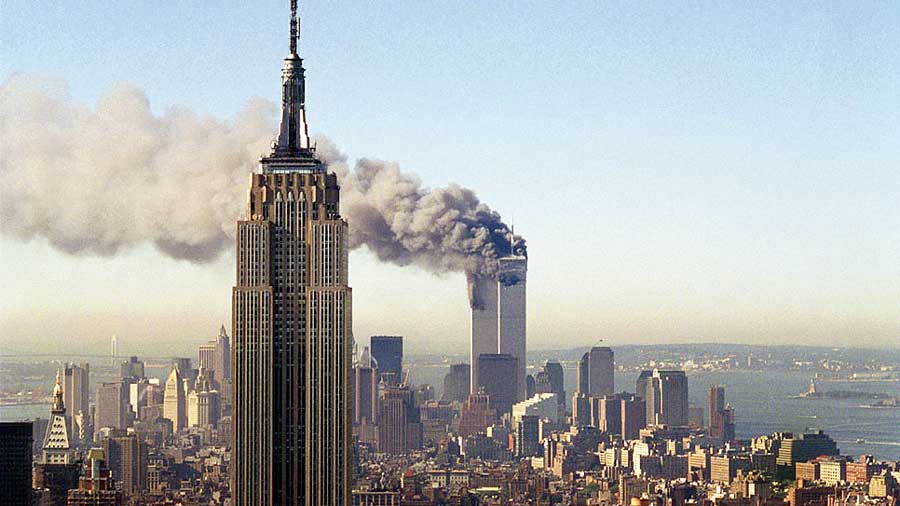 This year marks the 20th anniversary of the September 11 terrorist attack that took place in 2001 at the World Trade Center in Manhattan. The non-profit, 9/11 Memorial & Museum, commemorated the day by having the family of the victims read aloud the names of the deceased in a ceremony. There were also six moments of silence observed to acknowledge the moments of the fall of the World Trade Center, the attack on the Pentagon and that of Flight 93 crashing into a Pennsylvania field. The ceremony was open only to families of the victims.

At dusk, the annual ‘Tribute in Light’ took place where two powerful spotlights shot upwards to the sky to recreate the Twin Towers. This year, the museum partnered with NYC & Company and several buildings to illuminate many of New York’s edifices in blue light as a collective remembrance of that day. The structures included the Empire State Building, One World Trade Center, the Metropolitan Opera, Lincoln Center Plaza, The Oculus, New York City Hall, Governor’s Island, and several others.

Several films and docu-series portraying the 9/11 attacks and the aftermath were also slated to release around the time. One film that is in the spotlight is a Netflix movie called Worth. It is about the lawyer, Kenneth Feinberg, played by Michael Keaton, who was in charge of developing and administering the September 11th Victims Compensation Fund.

Another one, The Outsiders, documents the creation of the 9/11 Memorial Museum and portrays some disputes amongst the staff on how the unfolding of events was depicted in the museum.

Imagine being in front of 360 kilogrammes of butter but not being able to eat any (probably for the best). The ‘Butter Cow’ is the sculpture of a cow made entirely of butter and is presented annually at the Illinois State Fair in Springfield.

This year marks the 100th carving of the cow, keeping with an age-old tradition. The sculpture was kept in a refrigerated rotating display case at the Dairy Building. This year, it was created by Sarah Pratt and 360 kg of salted butter was donated by Prairie Farms Dairy.

Even if you couldn't make it to the fair, the state of Illinois placed a webcam over the sculpture allowing you to view it from the comfort of your home. Last month, when the sculpture was unveiled by the Illinois governor, there was a bit of an anticlimax as the glass pane of the display case fogged up due to the high heat, making the sculpture hard to see. But pictures confirmed that the sculpture depicted the cow and a young woman hugging it, keeping with the theme of “Embracing Tradition”. In case you are wondering, the Illinois State Farm offers webcams to let you view all kinds of farm mysteries, including piglets and livestock.

Now that Fall is here, classes are resuming in person, cafes are launching their Pumpkin Spice lattes and leaves are slowly changing colour. This means people can finally look forward to Fall foliage and leaf-peeping trips. A leaf peeper is a colloquial, local term referring to anyone who travels around and photographs the changing colours of leaves in areas that experience Fall, typically in New England and the Upper Midwest area. Several travel sites, including SmokyMountain.com, and magazines have already published the best spots to watch the foliage this year. Smithsonian Magazine released an interactive map with week-by-week predictions of the changing colours. The regional train system, Amtrak, is launching a National Fall Flash Sale with tickets at half prices for rides taking visitors on scenic routes between cities and a promise of spacious seats.

The pumpkin spice is back as well. Grocery and retail stores have started putting Fall decor and Halloween-related items on their shelves. While Starbucks unveiled a new Apple Crisp Macchiato, an unlikely player has jumped on this seasonal bandwagon — Budweiser. BudLight launched a pumpkin spiced canned seltzer on Twitter with the hashtag #FallFlannelSeltzer.

Labour Day — it fell on September 6 — was signed into a federal holiday back in 1894. It began as a reason to celebrate America’s hardworking labour force and unions. It is a paid off-day for most workers, celebrated with cookouts and get-togethers.

Wearing white is frowned upon after Labour Day although fashion historians are not sure how this ‘rule’ came about. But fashion magazines encourage consumers to ignore the rule: Coco Chanel and Michelle Obama have been spotted adorning white clothes throughout the year. This year, most cities hosted parades, concerts and happy hours in bars. People also visited local beaches. In New York, the 51st Labour Day Parade was a colourful event that celebrated Caribbean culture. The carnival started in 1930 because of the heavy West Indian population in Harlem; typically, it attracts three million attendees. This year, it went virtual due to the pandemic.

First it was the Cronut; now a close cousin, the Croffle, has thrown New York City into a dessert craze. The Croffle, a hybrid between a croissant and a waffle that originated in South Korea, is being sold in a bakery called Croffle House in Flushing, Queens. Croffle, made by pressing the rich croissant dough into a waffle iron and then adding toppings, has taken over Instagram with its colourful toppings of fruit, whipped cream or chocolate.