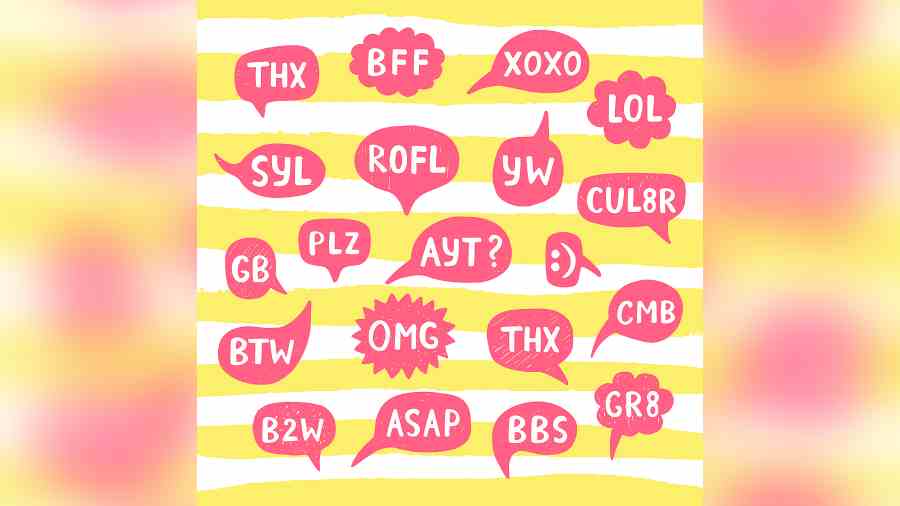 Humans are the only animals that talk in any true sense. The rudimentary exchanges of other species bear no comparison. A small part of human speech is carried over into writing. In this century, that proportion has drastically increased thanks to social media. We tap out messages where earlier we would talk on the phone, or, in most cases, do nothing. At whatever level, a hugely greater section of humankind now composes texts.

Yet like tossing a few sandbags to stem this flood of verbiage, we contract words and phrases as never before. We splurge on words but skimp on letters. ‘B4 u r’ and ‘C u l8r’ have lost ground to the autoprompt: but FOMO, YOLO, ROFL, NIMBY and the like are extending their empire, sometimes themselves starring in autoprompt. (I leave the unenlightened reader, if there be any, to work out the puzzles.)

Such practices are new, but not the motive behind them. People have always tended to compress what they write. Medieval European scribes used a mystifying range of contractions. As the same squiggle served several functions, readers might be left unsure of the meaning. The motive was to save not only time but the costly vellum used to write on.

Even earlier in origin is shorthand or stenography, transcription keeping pace with speech. Abbreviations will not suffice for this: it needs a separate set of signs calling for special training. Those confined to the alphabet have to summarize as well as abbreviate, like students taking notes in class (another dwindling practice given surreptitious recording on mobile phones). There is excellent precedent for such speed writing. A problematic version of Shakespeare’s King Lear is ascribed, though controversially, to a transcript made during a performance.

Acronyms were rare in earlier English. We find Latin tags like AM or AD, with the occasional English parallel like BC. In these examples, the letters are pronounced separately: technically, they are initialisms rather than acronyms. ‘Cabal’ is sometimes derived from the initials of five councillors of King Charles II of England in the seventeenth century; but the word actually refers to the mystical Jewish Kabbalah. The nineteenth century saw a few instances like OK, for the facetious ‘orl korrect’, and ‘on the Q.T.’ (quiet). OK is now a word in its own right, ‘okay’. The earlier twentieth century yields AWOL and ‘aka’ (usually in lower case). But these are jokey coinages at a colloquial level.

At what stage did acronyms become serious verbal currency? When did UNESCO, NASA, OPEC and SAARC find favour as nifty shortcuts, with enough vowels for easy utterance? Moving a step further, when did people designedly start naming their organizations with this factor in mind? When did they embark on a little harmless cheating by juggling the letters or adding extra vowels?

Today acronyms virtually constitute a reserve army of words. Just as we call our friends PK or KC, or famous people GBS or NaMo (a Hindi acronym, one of a growing list headed by Bhajpa), the Times Literary Supplement is now officially TLS, and Times Higher Education (the ‘Supplement’ long dropped) an awkward THE, complicating Google searches that ignore ‘the’ by default.

Bureaucrats love acronyms. They browbeat common people by claiming mastery over a mystical world walled in by a random cluster of letters: ICDS or KMWSA, like an unguessable password. Even items unquestionably for public use, like the new names for Calcutta streets, can be lengthy constructs where initials are the only recourse: BBD Bag or BBRBB Sarani, which is scarcely respectful to the person commemorated (three people in the case of BBD Bag).

Government reports carry a list of abbreviations. (So do scholarly tomes: ‘academic bureaucracy’ can have more than one meaning.) But the most ingenious instances play off an acronym against its expanded form in a kind of pun, often bilingual. Till the other day, government acronyms were really initialisms. Nobody complained that BSNL or ONGC was unpronounceable and mystifying. MGNREGA, which has brought immense benefit to the common Indian, is an opaque tongue-twister. Aadhaar cards carry the expansion ‘Aam Admi ka Adhikar’, but apparently as an afterthought.

We have now progressed to designer-made acronyms that serve as slogans or publicity tools. Their creators have worked out an ingenious language formula. A Hindi word, understood by most, serves as the acronym, while the expanded form spells out the meaning in English: thus AYUSH (Ayurveda, Yoga and Naturopathy, Unani, Siddha, and Homeopathy) or PM POSHAN (Prime Minister’s Overarching Scheme for Holistic Nutrition). In the latter, the prime minister features in the expansion; but an extra ‘PM’ is prefixed for good measure, as with virtually every recent scheme of the Union government. We all know what PM means.

Some poetic licence might be employed to allow the acronym to roll off the tongue. An element may be omitted (like Naturopathy in AYUSH), an extra vowel introduced, or the letters juggled around. As Malvolio says in Shakespeare’s Twelfth Night, “to crush this a little, it would bow to me, for every one of these letters are in my name.” Malvolio’s tweaking of random letters brought him to grief. Today’s word shrinkers know better. Government schemes sport acronyms like snappy brand labels, as though devised by professional marketing managers.

Such alphabet games afford harmless pleasure in these stressful times. Yet a nagging unease might spoil the fun. The scheme itself threatens to take on the colour of a publicity exercise: we may wonder whether its serious benefit is short-changed in consequence. To fuel our doubts, the original PM POSHAN, a child nutrition scheme, did not spend a paisa on actually dispensing food. Its successors work cosmetic changes, if that, on decades-old schemes without increasing the budget.

Shakespeare intrudes relentlessly. What is a word but air, says Falstaff in Henry IV. “Will it not live with the living? No.” He might have said the same of acronyms had he encountered them.