Who pays for a free press? 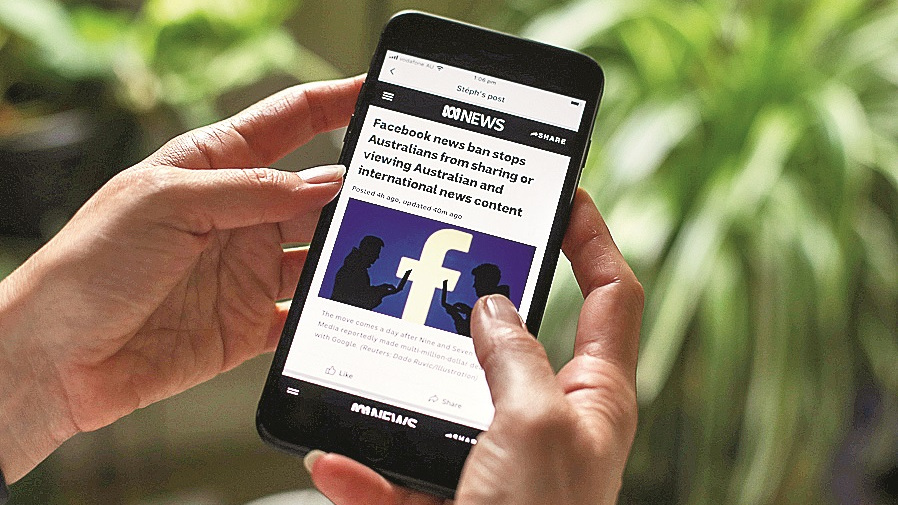 In this photo illustration ABC News reports on Facebook's news ban on Australian and International content on February 18, 2021 in Sydney, Australia. Facebook has banned publishers and users in Australia from posting it sharing news content as the Australian government prepares to pass laws that will require social media companies to pay news publishers for sharing using content on their platforms.
Brendon Thorne/Getty Images
Aniruddh Nigam   |   Published 17.03.21, 03:38 AM

In February 2021, Facebook briefly banned all news content in Australia. Australian users were restricted from posting or viewing news content on its platform. The company also deployed tools to scrub its platform of links to content by the Australian press. This unprecedented move sparked a global conversation about the grand narratives of digital sovereignty and big tech. Yet, the issue at the heart of this conflict has escaped deeper scrutiny.

Facebook took the step as a reaction to Australia’s News Media Bargaining Code. The Code, among other things, requires large platforms to negotiate commercial terms with Australian news publishers for showing their content and to pay publishers for their content shared on the platform. Facebook opposed this, claiming that the Code misunderstands the relationship between its platform and publishers. Subsequent negotiations have ended the stand-off — the ability to view news content was restored by Facebook in exchange for changes to the law conceded by the Australian government.

Why did the issue of sharing advertising revenue with news publishers lead to this high-stakes Westphalian drama? One must reckon with the state of the media industry to answer this. Media houses have grappled with an existential economic threat in the last decade, given the costs of producing high quality-journalism. The Covid-19 pandemic demonstrated this frailty in the Indian context, with many reports of newsroom closures and job losses. In this context, the business model of news, the rationale for revenue sharing and the political facts emerging from this conflict are key to evaluating what this means for the future of news.

Public interest in high-quality journalism arguably makes it a public good, lending to its eternal challenge of developing a sustainable business model. Despite its nature as a public good, asking governments to play a direct role in financing the press is like leaving the sheep in the wolf’s care. Financial control by government strikes at the inherent tension between the State and the press in the liberal democratic set-up given the role of the press in critically examining government policy.

An alternative is asking readers to pay for news. This, too, is a partial solution at best. Subscriptions create financial barriers to access, excluding large segments of the population. Further, most digital subscriptions are priced outside the common man’s reach, in addition to the practical hassle of obtaining multiple subscriptions. The traditional answer to this conundrum is to rely on advertising. This led to the development of a model where revenue from advertising cross-subsidized the readers who paid only a nominal amount. In doing so, advertising emerged as a way of financing the production of news without relying on government support or burdening readers.

With the emergence of social media platforms and improvements in targeting algorithms, advertisers have obvious reasons to prefer advertising digitally through advertising services offered by these platforms as opposed to engaging publishers individually. It is here that things get tricky. Publishers say they do not get a fair share of digital advertising revenue generated through their content. This is attributed to the market power of advertising platforms like Facebook and Google that intermediate publisher-advertiser interaction and, together, control nearly 60 per cent of the digital ad market. Publishers state that this makes them unavoidable trading partners, with asymmetrical bargaining power in negotiations, if any, on terms of advertising and revenue sharing.

The central question then becomes: in the digital era, who should pay for news? Governments cannot be trusted to finance the very people who are supposed to criticize them. Readers, largely, cannot afford subscriptions and, in any case, subscription-led models deny access to news to the indigent. Advertising revenues, on the other hand, are not reaching publishers.

The solution proposed by the Australian government is to require platforms like Facebook and Google to agree to terms for sharing advertising revenue with news publishers subject to binding arbitration. In essence, this is intended to ensure that a fair and equitable share of advertising revenue reaches the publisher.

The logos of requiring revenue sharing is that Facebook and Google are unavoidable trading partners and set the terms of digital advertising. This makes it impossible for publishers to negotiate fair terms. The Code creates a structure for negotiations to address this imbalance. This is bolstered by the ethos of requiring revenue sharing, which holds these platforms accountable to their claim of establishing new ‘global public spheres’. As per this argument, the unique position of operating the global public sphere comes with responsibilities, which safeguard public interest. This includes enduring limitations on private profit for the sustenance of an important public good. The pathos is supplied by the narrative of the slow death of print media, emergence of global tech monopolies, and journalism as a central facet of democratic processes.

While some reservations to the Code are well-founded, it would be premature to treat them as fatal flaws. Many, including Facebook, state that the Code misunderstands the impact of platforms, which do not ‘leech’ ad revenue but instead amplify content and increase traffic, benefiting publishers. This is empirically true. At the same time, platforms like Facebook are complex and perform many functions. An appreciation of the distribution-function of social media platforms (which is user-driven and free) should not mean ignoring market failures or asymmetries in their advertising-function (which is provided as a paid service).

Others argue the law only benefits legacy media houses with obsolete business models, preventing new business models from emerging. The business model of legacy media outlets may not sustain in the long run, and a shift towards decentralized freelancer-led models of journalism may be the future. This should not gloss over the fact that legacy media houses currently employ a substantial number of ‘on the ground’ journalists. Worsening economic health of the media industry risks not only job losses for these journalists but also affects journalistic output in this transitional period. To sacrifice the sustainability of high-quality journalism at the altar of a romantic vision of the internet would be to kill the goose that lays the golden eggs.

The power imbalance between publishers and platforms is not the only imbalance, which has come to light over the past month. Many describe Facebook’s actions in Australia as the successful ransoming of a sovereign State. When Facebook carried out its threat of disabling access to news content for the citizenry of an entire nation, it arguably crossed the Rubicon in terms of its relationships with sovereign States.

Governments across the world are waking up not just to the tremendous power that platforms wield over people but also to the unsophisticated nature of their own regulatory toolkits. A likely consequence is a cascade of regulations across the world, as governments try to protect themselves from similar reactions by platforms. For many, sovereignty is under direct threat from unaccountable tech platforms that can dictate the well-being of an entire citizenry. Considering the way in which Facebook lashed out at the Australian law, this is not far from the truth.

As governments create laws cutting at the heels of big tech but framed in their constituents’ interest, we are likely to see many more rounds of sparring between these giants. In this, Australia is not alone. There are reports of the Indian prime minister “discuss[ing] the progress” on the Code with his Australian counterpart. The Indian Newspaper Society, an industry body of legacy media houses, has already written to Google seeking 85 per cent of advertising revenue generated from their content.

In many ways, this is an age of reckoning for big tech. Platforms like Facebook may be Goliaths in negotiations with news publishers but we are yet to see if they can stand up to sovereign States with comparable effectiveness. If the source material is anything to go by — in the hierarchy of Biblical giants — the Leviathan far outranks the Goliath. By requiring the operators of the ‘global public sphere’ to pick up some of the tab for production of journalism, the Leviathan is intervening on David’s behalf, as it rightfully should.

The author is a Research Fellow at the Centre for Applied Law and Technology Research (ALTR), Vidhi Centre for Legal Policy