Advertisement
Home / Opinion / Afghanistan now, Uganda then: there are parallels

Afghanistan now, Uganda then: there are parallels

EYE ON ENGLAND: A Bengali feminist, thinker, writer & activist; a BBC veteran who used to flirt with Thatcher 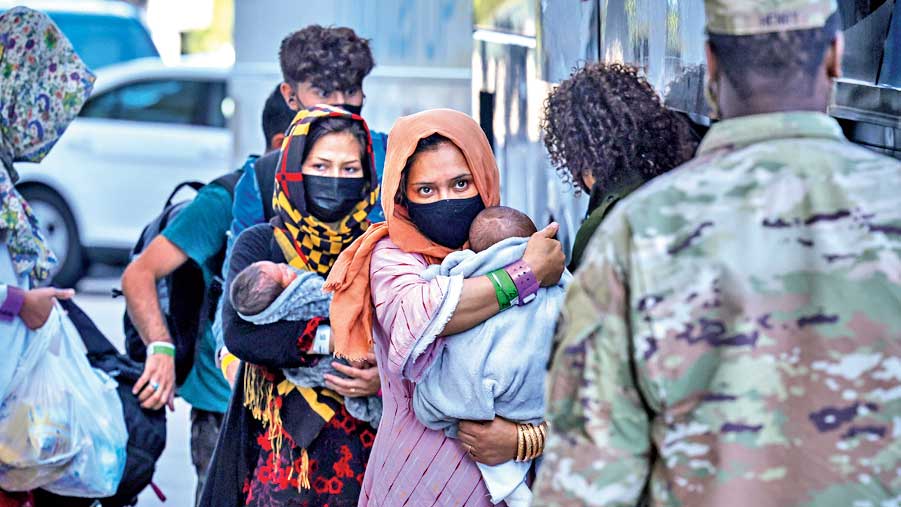 Britain has committed to taking 20,000 refugees from Afghanistan. For a better understanding of the practical, psychological and emotional problems refugees experience when forced into permanent exile from the countries of their birth, I talked to Neema Shah about her novel, Kololo Hill. The novel recalls Idi Amin’s 1972 expulsion of 90,000 Asians from Uganda — of whom 30,000 settled in Britain — through the tale of one family: Motichand, his wife, Jaya, their sons, Pran and Vijay, and Pran’s wife, Asha.

It was heart-wrenching to lose a country as stunningly beautiful as Uganda. Its lush vegetation, red earth and the smell after heavy rain when I went there reminded me of Assam. Neema, who was born in Britain to parents who lived in East Africa, reminds me that “the hot weather allows for a way of life that you don’t get certainly in places like the UK — being able to sit out in verandahs late at night.”

In the novel, Motichand collapses and dies before the family can leave Uganda. On the way to the Entebbe airport, Asha is sexually molested by Amin’s thuggish soldiers, leaving her traumatized. In Britain, while she finds freedom in a new job, her marriage disintegrates. Pran hankers for a return to Uganda, however unsafe the country. For him, India, which has refused to accept Ugandan Indians with British passports, is a foreign land. The women appear to adjust better to life in Britain. Financial independence means they are less subservient to the men.

It will be the same with the even more conservative Afghan refugees, since many of the women are educated. “Definitely there are parallels,” agrees Neema.

It is my ignorance entirely that I hadn’t heard of Rokeya Sakhawat Hossain and the English short story, “Sultana’s Dream”, that she had written in 1905 until I was told about the author from what is now Bangladesh last week by Piers Masterson, a freelance journalist with ArtAsiaPacific.

Masterson revealed to me that he had come across Begum Rokeya, a “Bengali feminist thinker, writer, educator and political activist”, while researching on science fiction written by Indians.

In “Sultana’s Dream”, which I would recommend to everyone, Begum Rokeya imagined a ‘Ladyland’ in which roles are reversed and women rule while men are confined to purdah in “mardanas”. After reading “Sultana’s Dream”, I am not at all surprised that Masterson compared Begum Rokeya to Jules Verne. In her story, cooking is done by trapping the sun’s heat, water runs down pipes connected to clouds and travel is by air-cars fuelled by hydrogen.

Boots on the ground

Kim Sengupta has certainly had “a good war”, as foreign correspondents like to say. We were once colleagues who sat opposite each other at The Daily Mail and occasionally gossiped in Bengali. These days, my adventures are confined to local supermarket trips while Kim has been filing and tweeting daily from Kabul as the defence and security editor of The Independent.

Earlier this week, Kim — “I have been covering the most recent Afghan war since its inception,” he said in The Independent — wrote a valedictory piece from Kabul: “Every single foreign journalist on the ground has received desperate pleas from those trying to get away; everyone has tried the best they could, getting out individuals and families with the help of sympathetic troops and officials... ” He added: “There is a deep concern for our Afghan colleagues in the media. They have been the real heroes in covering this conflict. We, the foreign media, have come here over the years, done our stint, and then gone back.”

Kim recounted how Ahmed Wali Karzai, the former president’s brother who ran Kandahar, “was a Chelsea supporter and a great admirer of John Terry and wondered if I could get him a signed shirt of the then Chelsea captain. I managed to get one... A week later he was shot dead by one of his bodyguards.”

The British are very good at writing biographies. But more often than not people get trashed when their biographies are written by those who know them best: their own children. The Daily Telegraph carried an obituary of the biographer, Lady Susan Chitty, who died on July 13, aged 91. She was good at discovering the “guilty secrets” of her subjects. Her most devastating biography, Now to My Mother, was of the novelist, Antonia White, which began: “Antonia White was not a good mother to me. She conceived me out of wedlock, put me in a home for the first year and a half of my life and handed me over to nannies and boarding schools for much of my childhood... a friend once referred to her as a rivet in a cream puff.”

“Susan loathed her mother and lived in terror of her volcanic rages,” the obituary continued. “As young children Susan and her half-sister plotted to murder their mother and bury her body with a stake through the heart.” So engrossing was the obituary that I missed my train stop.

The broadcaster, Rajni Kaul, who died this week, aged 93, was married for 63 years to Mahendra Kaul, who was once the face of Asian TV programming on the BBC. Rajni used to joke that her husband managed to get interviews with Margaret Thatcher by flirting with Britain’s first woman prime minister, “and she loved it”. As Thatcher came down the stairs on one occasion, he exclaimed, “Wow! You look beautiful.” Her delighted response was: “Do you think so?”