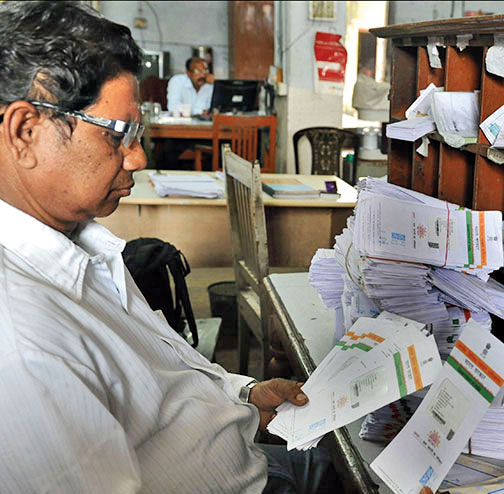 While mandatory private usage of Aadhaar, such as having ot produce it to buy a plane ticket, is unnecessary and disproportionate, the same logic cannot not apply to voluntary usage
Telegraph file picture
Arghya Sengupta   |   Published 31.10.18, 02:16 AM

Much like the ship of Theseus, Aadhaar continues to be made and remade piece by piece over time. What started off as a universal identity programme during the regime of the United Progressive Alliance became the primary tool for subsidy disbursal under the National Democratic Alliance government. The judgment of the Supreme Court upholding the use of Aadhaar while restricting its uses marks yet another remaking. Henceforth, Aadhaar can be used in sectors where it is necessary and proportionate and not others. As citizens, expect Aadhaar to be a mandatory requirement while availing subsidies and services from the State and filing tax returns, but not, for the time being, during banking transactions, buying SIM cards or any other interaction with the private sector. This delicately achieved balance, sustained more by pragmatism rather than principle, provides an ideal vantage point from which to speculate about the possible future evolution of Aadhaar.

The kernel of such an evolution can be found in the Supreme Court judgment itself. At its most basic, the court held that a scheme of biometric identification of individuals is per se not a violation of privacy. This is a commonsensical determination. Fingerprint and iris scanners are routinely used for identification purposes, ranging from allowing entry into countries to unlocking smartphones. Facial recognition is the current state of the art. The usage of behavioural biometrics to detect patterns of behaviour such as dynamics of typing and gait is imminent. The widespread acceptance of biometric forms of identification is in keeping with the zeitgeist of modernity — efficiency. The quest for efficiency above privacy and other virtues has powered the explosion of smartphones and email accounts with little regard to the ability of email service providers to read personal emails or the capability of phone manufacturers to record app usage. In this context, to single out Aadhaar and hold it legally culpable for following a clear societal preference for efficiency would be blinkered. If, indeed, biometrics makes citizens uncomfortable, the remedy lies in close introspection of choices made and not an acontextual legal challenge.

In principle too, the mere fact of mandatory biometric capture is not a violation of privacy. This is simply because no matter how troubling the thought might be, as individuals we do not have complete control over our own bodies at all times. Were that the case, there could not have been a legally sanctioned bar on organ donation, restrictions on abortion, or requirements of thumbprints or signatures to attest documents. In certain limited circumstances, society demands and law recognizes the limitations of bodily integrity.

The relevant question in Aadhaar’s case is this: what are the use cases of Aadhaar where the requirement of mandatory biometric identification can hold sway over unfettered personal autonomy? In upholding the use of Aadhaar authentication for subsidy disbursal and tax-return filing but not for bank account and telecom usage, the court appears to be underlining the need for necessity and proportionality in the usage of Aadhaar. This determination is, in turn, dependent on adequate objective data to demonstrate the utility of Aadhaar in each use case. Such data on duplicate PAN cards and tax frauds were available and presented to the court, but not similar data relating to fraudulent bank account openings and cell-phone usage.

This requirement of utility to assess necessity and proportionality of Aadhaar usage, while subjective, is sensible only when Aadhaar is laid down as a mandatory precondition for accessing a service. For such mandatory usage, the message of the judgment is clear — the government must have hard evidence of benefits before making Aadhaar mandatory in multiple sectors. This was practically necessary to prevent a mad scramble to use Aadhaar authentication when its need isn’t justified. Consequently, it must set the new standard for future mandatory use of Aadhaar.

But in its well-intentioned effort to prevent the mindless proliferation of Aadhaar, the court, perhaps unwittingly, barred all Aadhaar usage pursuant to a contract between a service provider and an individual. While any mandatory private usage, say the mandatory production of Aadhaar before being allowed to buy a plane ticket, is both unnecessary and disproportionate, the same logic simply does not apply to voluntary usage. In this alternative fact situation, it would be patronizing and misplaced for any court to second-guess the utility of Aadhaar for any individual who wishes to identify himself/herself through Aadhaar. On the contrary, it should be viewed as a right, to be used or not be used, by the individual at will.

Such voluntary usage is true to the nature of Aadhaar as a public good. In a rapidly privatizing and privatized world where the most common forms of digital identity are email addresses and phone numbers, both, in a majority of situations, provided by private parties, Aadhaar is an outlier. As a public infrastructure built and owned by the State, it is neither captive to the need for profit nor answerable to self-seeking shareholders. Its offering of a unique digital identity to every resident of India must not be seen as a cost-saving mechanism for the government or a fraud-detection device for private parties. At its most fundamental, it must be viewed as an electronic pramaanpatra for Indians in the 21st century.

For the State, in a growing digital economy, the ability to have a record of such information across silos is critical for providing more targeted services, crime control and responsive government. In an age where States are routinely ceding control over their citizens to ever-growing California-based tech titans, the public infrastructure of Aadhaar is a bulwark allowing the Indian State to have large amounts of cross-sectoral data on its citizens generated with their consent. The benefits to governance flowing from such a data bank in the age of efficiency are likely to be immense. Needless to say, the potential for misuse, particularly for surveillance, is equally rife. It is thus critical that a data protection law be passed quickly for Indians to get secure benefits in the digital economy. The future of Aadhaar requires such a law. Equally important, the future of a robust digital economy in India that is not overrun by unaccountable private sector entities demands it.

The judgment of the Supreme Court is an inflection point that allows Aadhaar policy-makers to introspect. Its continuing evolution as an electronic identifier with limited mandatory usage where there is a weighty public interest combined with widespread voluntary usage by individuals wherever they might need to identify themselves empowers residents and bolsters efficiency of performance delivery. This dual path may be the way for Aadhaar to ensure that unlike the ship of Theseus, it does not ultimately become a museum piece viewed with repentance of what might have been. Instead it could be the foundation for India’s growing, accountable and publicly-owned digital economy.

The author is Research Director, Vidhi Centre for Legal Policy