Politics and play | Gandhi versus Hindutva 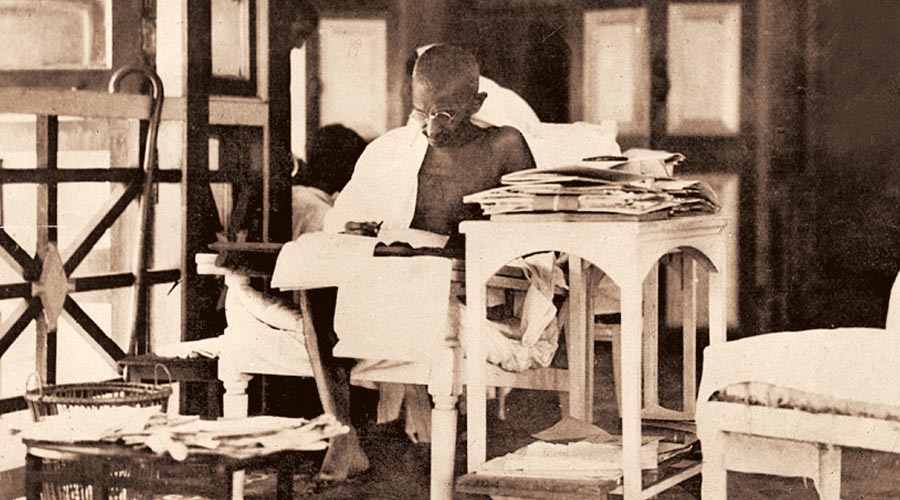 In April 1915, a few months after he had returned to India from South Africa, Mohandas K. Gandhi was in Delhi, where he addressed an audience of students at St Stephen’s College. To an audience whose members came from diverse religious backgrounds, Gandhi spoke of his mentor, Gopal Krishna Gokhale, who had died a few weeks previously in Pune. Gokhale, said Gandhi, “was a Hindu, but of the right type. A Hindu Sannyasi once came to him and made a proposal to push the Hindu political cause in a way which would suppress the Mahommedan and he pressed his proposal with many specious religious reasons. Mr. Gokhale replied to this person in the following words: ‘If to be a Hindu I must do as you wish me to do, please publish it abroad that I am not a Hindu’.” (“Mr. Gandhi’s Visit”, St. Stephen’s College Magazine, number 32, April 1915.)

In the first decades of the twentieth century, some Hindu politicians as well as many Hindu holy men claimed that the numerical majority their community possessed gave them the right to dominate politics and governance in India. This belief Gandhi emphatically rejected. Like his teacher, Gokhale, he refused the temptation to define India as a Hindu nation. Like Gokhale again, he worked ceaselessly to build bridges between India’s major religious communities, Hindus and Muslims. This open-minded and deeply humane attitude enraged the fanatics in his community, who opposed Gandhi all through his public career, and eventually succeeded in murdering him, seventy-four years ago this week.

In a recent book, Gandhi’s Assassin, Dhirendra K. Jha presents compelling evidence to suggest that, despite claims to the contrary, Nathuram Godse maintained close ties with the Rashtriya Swayamsevak Sangh all through the 1940s, right up to the time he killed Gandhi on January 30, 1948. Beyond the question of individual affiliation, however, lies the deeper question of ideological proximity. Like Godse, the RSS believed, and still believes, that Hindus have a prior and superior claim to the politics and cultural life of the nation. It thinks and acts on the premise that Hindus are somehow more naturally and essentially Indian than Muslims or Christians. This Hindu supremacism sets the RSS and its associated organizations decidedly at odds with Gandhi, as the following paragraphs shall demonstrate.

Unlike the RSS, which claims that Hindus have a special claim on India,  Gandhi believed that people of all faiths had equal rights to the country and all that it represented. Gandhi’s moral vision and his political practice both embodied this inclusive idea of India. Consider in this regard the important booklet he published in 1945 on his party’s Constructive Programme. The first element in this programme was “communal unity”, preceding other subjects such as the abolition of untouchability, the promotion of khadi, the upliftment of women, and the pursuit of economic equality (all of which were also dear to him). In this crucial introductory section, Gandhi wrote that “the first thing essential” for achieving communal unity is “for every Congressman, whatever his religion may be, to represent in his own person Hindu, Muslim, Christian, Zorostrian, Jew, etc., shortly, every Hindu and non-Hindu. He has to feel his identity with every one of the millions of the inhabitants of Hindustan. In order to realize this, every Congressman will cultivate personal friendships with persons representing faiths other than his own. He should have the same regard for the other faiths as he has for his own”. (M.K. Gandhi, Constructive Programme: Its Meaning and Place, Ahmedabad, 1945, pp. 8-9.)

Two years later, the Congress and Gandhi failed to prevent the division of British India on religious lines. However, rather than succumb to fatalism and depression, or worse still to feelings of revenge and retribution, Gandhi now devoted all his energies to assuring the Muslims who had stayed behind in India that they would enjoy rights of equal citizenship. His heroic fasts for communal harmony in Calcutta in September 1947 and in Delhi in January 1948 have been extensively written about. Less well known, but equally significant perhaps, is a speech he gave to the All India Congress Committee on November 15, 1947. Here, Gandhi said: “I want you to be true to the basic character of the Congress and make Hindus and Muslims one, for which ideal the Congress has worked for more than sixty years. This ideal still persists. The Congress had never maintained that it worked for the interest of the Hindus only. Must we now give up what we have claimed ever since the Congress was born and sing a different tune? Congress is of Indians, of all those who inhabit this land, whether they are Hindus, Muslims, Christians, Sikhs or Parsis.” (Collected Works of Mahatma Gandhi, volume 90, pp. 38.)

It was for holding this belief, that India belonged equally to all those who inhabited the land, whether Hindu or Muslim, or neither, that Gandhi was assassinated. Some weeks after Gandhi died, a group of his followers met in Sevagram to discuss what to do next. The RSS featured in these discussions, not just because Godse had been an RSS member, but because the RSS chief, M.S. Golwalkar, had made some viciously communal speeches in the run-up to Gandhi’s murder. In this meeting of Gandhians in Sevagram in March 1948, Vinoba Bhave spoke feelingly of how, as a (now lapsed) Maharashtrian Brahmin, he had come to deeply distrust an organization dominated by his own caste fellows. The RSS, remarked Bhave, “has been spread far and wide and with great skill and its roots have struck very deep. It is completely fascist in character... The members of this organization do not take others into their confidence. Gandhiji’s principle was that of truth; it seems to be that the principle of these people must be that of untruth. This untruth is an integral of their technique and their philosophy.”

Vinoba went on to explain the vast gulf between the Gandhi-led national movement and the proponents of Hindutva. As he put it: “The methodology of the RSS has always been antithetical to ours. When we were going to jail, their policy was to join the army or the police force. They would always be quick to turn up anywhere where there was any likelihood of Hindu-Muslim riots. The government of the day [that is, the British raj] saw its own advantage in all this, and gave them encouragement; and now we are having to deal with the consequences.” (See Gopalkrishna Gandhi, editor, Gandhi is Gone, Who Will Guide Us Now? Permanent Black, pp. 88-90.)

Others among Gandhi’s followers, who had likewise studied the sangh closely, shared Vinoba Bhave’s understanding of what it represented. Writing in the issue of Harijan dated December 19, 1948, K.G. Mashruwala — like Bhave a long-time member of Gandhi’s inner circle, and a scholar of some distinction — observed that while he had reservations about the RSS for many years, “my misgivings about it became stronger over time”. Mashruwala had been studying Marathi literature by and about the RSS and, from his readings, concluded that “of its slogan ‘Love for Hinduism and ill-will towards None’, my opinion is that the last half is not true. It has, from all that I have heard about it and read of its literature, ill-will and dislike for Muslims.”

This “ill-will and dislike for Muslims”, that Mashruwala identified as a core tenet of the RSS, was abundantly expressed in the writings of M.S. Golwalkar, the longest-serving sarsanghchalak of the organization. The current head of the RSS, Mohan Bhagwat, has a less crudely polemical style than some of his predecessors, but there is little doubt that he subscribes to the same ideology of Hindu supremacism. (His silence on the recent hate fest in Haridwar is revealing in this regard.) In 2022, as in 1948, there remains a yawning chasm between the minority-baiting ideology of Hindutva and the plural and inclusive philosophy of Gandhi. Now, as then, Indians must choose between one or the other. On how wise and brave we are, or can be, the future of the Republic may depend.