Advertisement
Home / Opinion / A WRITER IN HER PARLOUR

A WRITER IN HER PARLOUR 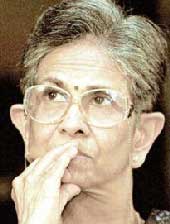 WRITING FROM THE MARGIN AND OTHER ESSAYS
By Shashi Deshpande, Viking, Rs 395

Essay-writing has become more or less a lost art. Writers do not want to venture into this genre, publishers do not encourage it, and readers have forgotten its existence, unable to find it on the booksellers’ shelves. So Shashi Deshpande’s collection of essays is a refreshing change from the usual fare served to the readers. Deshpande is a novelist and short story writer who has succeeded in creating a readership of her own. It must be said that she has started out early, as most creative writers write about themselves and their craft quite late in life.

Writing from the Margin and Other Essays contains essays written by Deshpande over the last 15 years. Some have been revised and updated for inclusion in this book. Beginning with the essay, “In first person”, where she writes about herself, and ending with “A man of integrity”, about her late father, Deshpande manages to squeeze in a lot of matter in between, making the book palatable for readers with literary inclinations and otherwise.

Her style and treatment of subjects always hover around the literary, though. The subjects of the 16 essays range from the English language, question of identities, globalization, literature, morality, to censorship, feminism, films, fiction and so on. But it is Deshpande’s work that becomes a window to the writer’s preoccupations. Thus, “In first person” becomes a storehouse of information about the writer. Apart from answering questions such as “Why do writers write?” and “Can creative writing be taught?”, she talks about her own reasons for taking up writing, books that she read, her learning processes and so on.

She also broaches the sensitive subject of her choice of medium, and goes on to talk about one’s identity in today’s world which makes her essays topical. The distinctive feature of Deshpande’s essays is that they have the stamp of her personality. It is evident that her ideas and opinions matter to her as much as her readers in creating an image of the world she inhabits. Her candid expressions of her self is her strength as well as her weakness. For instance, her musings about English and the craft of writing gives the reader the feeling of listening to a good teacher in a classroom. Her reiterations about feminism may be too much with some readers. The essay devoted to her late father sounds somewhat perfunctory, and would have been better placed elsewhere.

Deshpande’s strength is her confidence. She writes about her own kind without a trace of vanity of affectation. But the anger directed at the ways of the male-dominated society and hurt at being denied due recognition are difficult to miss.