A thought for those who work so that we may celebrate 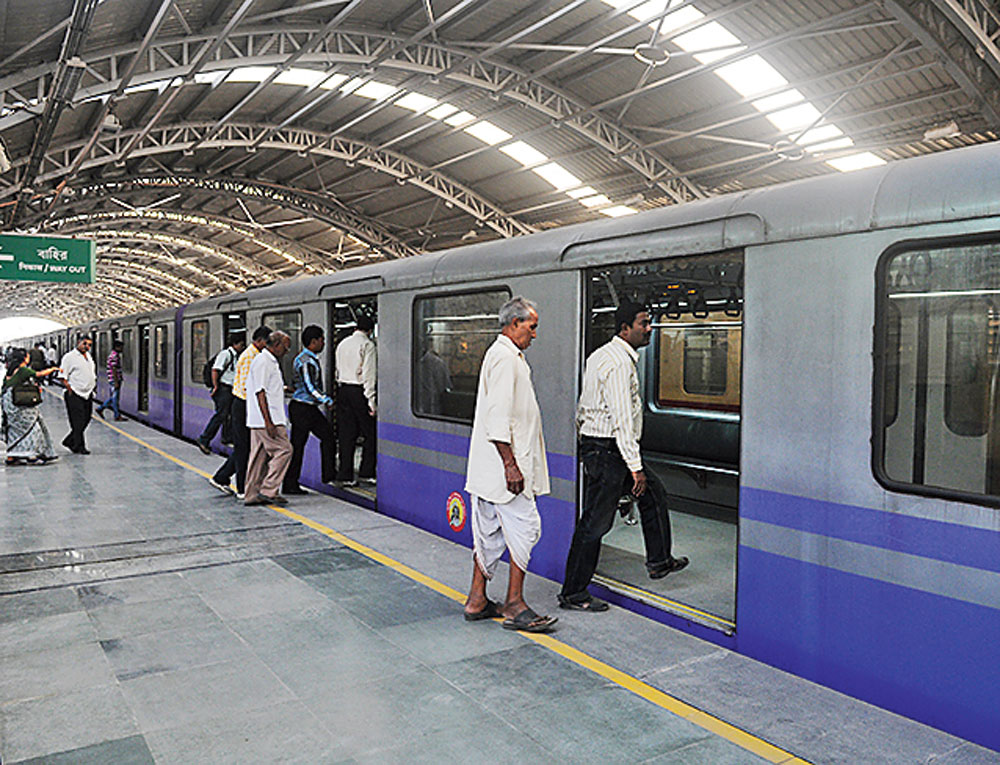 Sir — There is a reason why the metro railway in Calcutta is called the lifeline of the city. The road space available in the eastern metropolis is not adequate; this makes traffic congestion almost a regular phenomenon. In such a situation, the metro is the most convenient way for commuting within the city. However, this would not have been possible without the service rendered by the employees of the Calcutta metro. Even during Durga Puja, they work tirelessly through the night so that pandal hoppers can get back home safely.

Sir — The editorial, “Why migrant workers are seen as dispensable” (Oct 10), was right in blaming politicians for the attacks on north Indians in Gujarat. Some political leaders deliberately incited violence in order to reap electoral dividends.

An infant, barely 14 months old, was allegedly raped in Sabarkantha district by a migrant worker from Bihar. There is no doubt that the perpetrator should receive maximum punishment for committing such a grievous crime. But the hate crimes against migrants from Bihar and Uttar Pradesh in Gujarat after the rape case came to light are also condemnable.

The situation in the western state reminds one of the anti-outsider agitation in Maharashtra in the 1960s. In Gujarat, migrant workers have played a stellar role in propelling the economy. Therefore, it is sad that they should now face such hostility. The developments in Gujarat can also hamper the international image of India as an investment destination. It is thus the responsibility of the prime minister, Narendra Modi, who himself hails from Gujarat, to intervene and calm the tempers.

Sir — The Congress president, Rahul Gandhi, has linked the attacks on Hindi-speaking migrants in Gujarat to unemployment. One feels that the Congress leader is right. At a time when unemployment rates are high, the youth in Gujarat are becoming increasingly wary of outsiders taking away the few jobs that the economy is generating.

According to a report of the International Labour Organization, India will have 18.9 million unemployed persons in 2019. In light of this, the government should not only try to create more jobs but also impart skills to the youth to improve their employability.

Sir — Tarring an entire community for one man’s crime is an old ploy of nativist outfits across the world. However, the anti-migrant protests in Gujarat still came as a shock. Incidentally, people from Gujarat were one of the first groups in India to seek opportunities in distant lands. The attacks on migrants will tarnish the reputation of Gujarat.

Moreover, every Indian has the right to work anywhere in the country. The state government must prosecute all those who participated in the violence.

Sir — It is unfortunate that migrants from Uttar Pradesh and Bihar were attacked in Gujarat. Following the rape of a toddler by a migrant, scores of hate-spewing, anti-migrant social media posts were shared in the western state. This ultimately precipitated the violence.

We must remember that no state belongs to any particular community. All Indians can live and settle anywhere they want to. The spirit of the Constitution must be maintained at all times and by everyone.

Sir — Is India’s victory in the first Test match against the West Indies something to write home about? We all know the current West Indies are a mediocre team with no credible bowling attack. They hardly have any batting depth either. Naturally, the contest was a completely one-sided affair with Indian batsmen and bowlers calling the shots right from day one. There is no denying, however, that the much-needed victory after the humiliation in England has given India a measure of self-confidence.

But the question is — by simply beating a weak side, can India really claim to be a team of distinction? Piling up runs on a flat pitch and on home conditions, and that, too, against the West Indies could not have been difficult.

Such one-sided matches are also not good for the game. The empty stands at the Rajkot stadium bore testimony to the fact that cricket fans these days love well-contested matches and not one-sided affairs, even when the home team has the upper hand.

Sir — India notched up their biggest victory in Test cricket against the West Indies at Rajkot. The Virat Kohli-led side defeated the Caribbeans by an innings and 272 runs. The result, however, did not come as a surprise to those who follow cricket. The islanders in the last few decades have lost much of their cricketing glory which they earned during the seventies and the eighties when they had players like Wes Hall, Gary Sobers, Rohan Kanhai and Clive Lloyd, to name a few. One hopes the visitors will show some improvement in the remaining matches.

However, the result in Rajkot must have come as a welcome breather to the beleaguered Indian coach, Ravi Shastri.