A Tamil journalist's encounter with Netaji in snowy Austria

When A K Chettiar asked Subhas Chandra Bose to smile for a picture, he was told, 'I do not smile under orders' 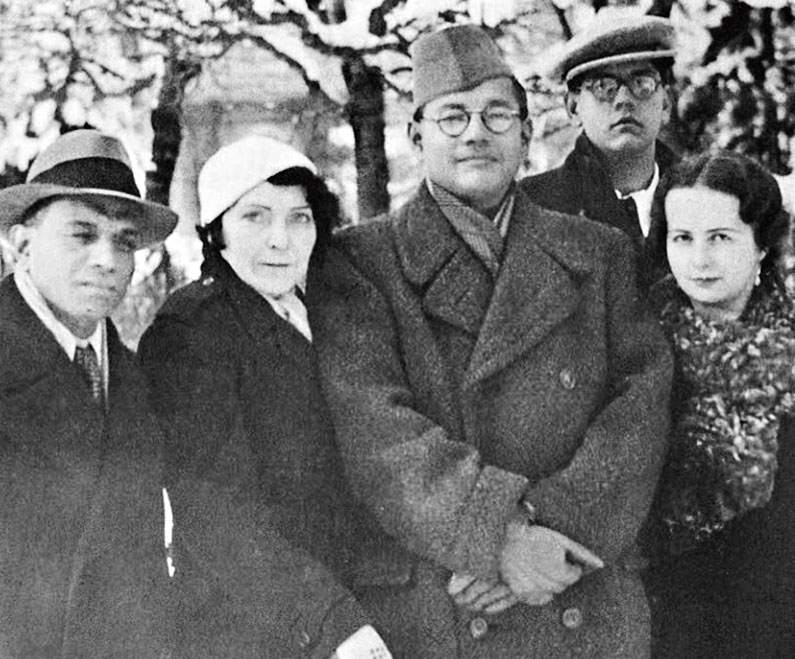 In the winter of 1937, Netaji Subhas Chandra Bose spent six weeks in Badgestein, Austria, recouping his health. A few photographs, shot against the background of the snow-covered hills, have survived from those days. Dressed in a heavy coat Netaji is seen with A C N Nambiar, Hedy Fülöp-Miller, his nephew A N Bose and Emilie Schenkl. These photographs were shot by a most unlikely person. The man behind the camera was a self-effacing young man of twenty-six, born in the dry hinterland of the Tamil country.

Annamalai Karuppan Chettiar or A K Chettiar (1911-1983) was a journalist who had edited journals in his hometown of Karaikudi, and later in Rangoon. Barely two months before photographing Netaji, on a voyage from New York to Dublin, he had hit upon an audacious idea. He wanted to make a documentary on Gandhi based near-exclusively on footage already shot by various news agencies and amateurs. To realize this dream he circumnavigated the world twice even as the World War was imminent, collected over 50,000 feet of actual footage, produced the documentary, and released it first in Tamil, in August 1940 (and a little later in Telugu). In 1950 it was made in Hindi. In 1953, he remade the film in Hollywood and released it under the title Mahatma Gandhi: Twentieth Century Prophet. But all this was later.

A few years earlier, Chettiar had trained in the Imperial College of Photography in Tokyo and later in the New York Institute of Photography. While studying at New York, he interned with the famed Pathé News agency. Even though he was critical of the Nazis, he had come to Germany, for 10 weeks, to train under Karl Vass of the Nazi Propaganda Bureau.

It was at this time, in December 1937, that Chettiar wrote to Netaji from Vienna asking to film him. We do not know why he wanted to film him — it is likely that it was for his film on Gandhi. Chettiar’s original documentary on Gandhi not having survived — Chettiar could beat the British censors and the police during the Quit India movement but not the apathy of his countrymen — we do not know for sure.

Netaji replied promptly. But the letter carried only a post box number. Chettiar did not hesitate. He promptly took a train early next morning, and arrived late in the evening at Badgestein. He planned to check into a hotel room, hoping to enquire of Netaji’s whereabouts at the post office later.

At the train station was a swarm of hoteliers, and Chettiar chose one. But the agent soon handed over Chettiar’s luggage to another man. When they reached the hotel a surprised A C N Nambiar emerged wondering how Chettiar had managed to trace him. Soon they surmised that the hotelier had assumed that a brown-skinned man could have come only to meet Netaji and had brought him there.

At the dinner table was A N Bose, the son of Netaji’s elder brother studying at England who was visiting his uncle. Two women, Fülöp-Miller, a writer and “a younger woman, Subhas Babu’s secretary whom he later married”, Emilie Schenkl, were present as well.

Ignoring Chettiar’s protests that it was too late in the evening to bother the great man, Nambiar announced that Netaji, lodged in an adjacent room, would meet them soon. But before he made his appearance the wine bottle on the table was put away. Chettiar felt edgy — he never imagined that he would be able to meet Netaji in person, and at such close quarters. He thought to himself, “So many lakhs of people in India were eager to have a darshan of Subhas babu. Few could meet him alone in India. But here I was and wondered at my great fortune.” As he greeted the leader with folded hands, he trembled.

Netaji put him at ease. Enquiring after him, Netaji did not stop with checking with the hotel owner if everything was fine. He took Chettiar to his room, checked on the amenities and showed him the use of the toilet facilities. An emotional Chettiar could barely sleep that night. Tossing in bed he woke up unusually late the next morning.

The next day it was lunchtime before he met Netaji. At the table, Chettiar observed, Netaji’s conversation was marked by “resolve and humour”. Chettiar snapped a number of pictures in the afternoon. The following morning Chettiar made Netaji sit on a chair at the hotel entrance. But when asked to smile, he replied: “I do not smile under orders.”

It was a cold winter day, and Chettiar could barely click the camera with gloves on, and therefore he removed them. By the time he had clicked twice his fingers had become numb. Blood began to ooze from his fingers. Netaji rushed to him, bandaged his fingers with his handkerchief, and ordered that it was “enough of taking pictures”. The next day, the shooting continued with Chettiar’s new and expensive moving camera. Chettiar’s work was over in three days. But Netaji asked him to stay for a few more days. Chettiar observed in his memoir, written 24 years later, “I had the fortune of staying with Subhas Babu for one whole week when all I had requested was a couple of hours.” One afternoon he also had the privilege of going out with Netaji and his group on a sleigh drawn by dogs. When Chettiar left for Rome from Badgestein, Netaji helped Chettiar with purchasing the tickets.

This was not Chettiar’s only meeting with Netaji. A year later he filmed him during the Congress working committee meeting at Wardha. Two years later, when in Calcutta, Chettiar went to meet him. At the Elgin Road residence, Chettiar was taken by Netaji’s secretary to his bedroom. Netaji was resting on his bed after lunch. Apologizing, he said, “When I meet familiar persons I do not observe formalities,” and pointed to the wall. The photographs snapped by Chettiar at Badgestein hung there. “I love the snow,” said Netaji.

The author is a historian and Tamil writer based in Chennai