A tale of two railway lines in China and India 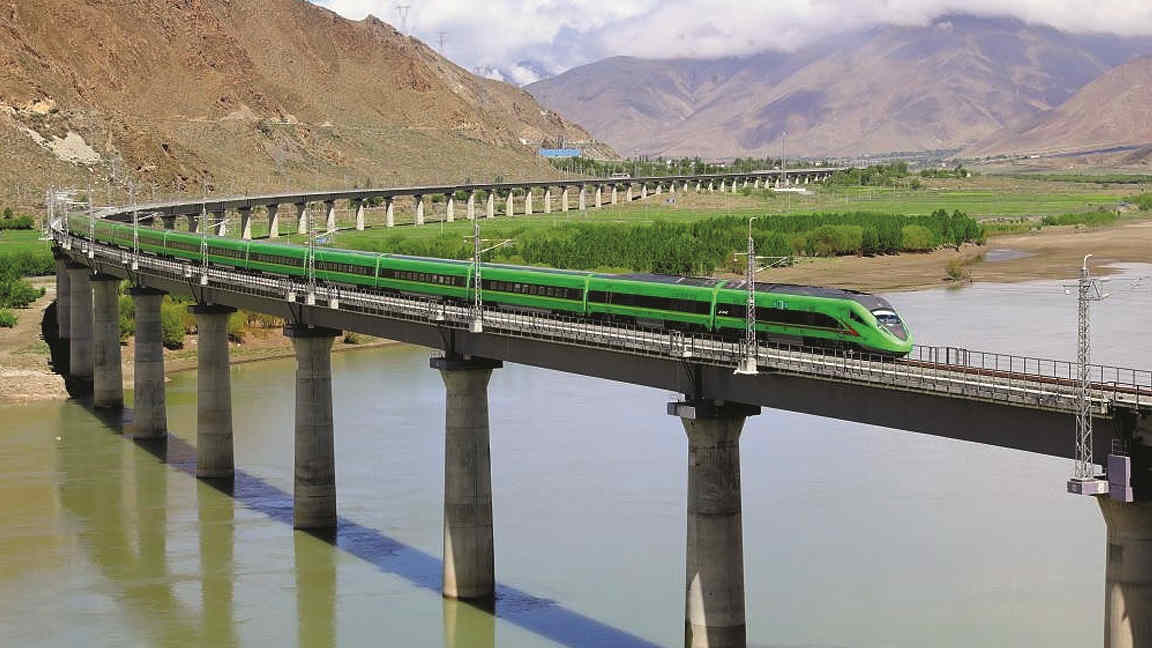 On June 25, 2021, China operationalized the 435-kilometre-long Lhasa-Nyingchi railway line in the southwest of the Tibet Autonomous Region. At 10.30 am, a green bullet train carrying a large number of passengers left Lhasa railway station for Nyingchi, leading to much celebration in Tibet and in China. In India, this event was noted for the fact that it brought the Chinese railway closer to the Indian border in Arunachal Pradesh. But for us, it was a one-day wonder; soon we plunged into our own worries, our own affairs, and our own petty concerns. We completely ignored the engineering and technological marvel this project represented. Here are some facts: i. The railway is situated in the valley between the Gangdise mountains and the Himalayas on the Qinghai-Tibet plateau, and over 90 per cent of the track is at an altitude of 3,000 metres above the sea level. ii. As noted already, it is a 435-km-long railway line. iii. It has a designed speed of 160 kms-360 kms per hour. It is a bullet train of the Fuxing type that operates in Tibet. iv. It is a single-track line but is fully electrified. v. It can handle both passenger and goods traffic. vi. It covers the distance between the two stations in three and a half hours, reducing travel time from 5 hours to 3.5 hours. vii. It provides southeast Tibet with a railway service for the first time. viii. The railway line passes through 47 tunnels and 121 bridges and crosses the Yarlung river 16 times. These tunnels and bridges account for 75 per cent of the total length of the line. ix. More than 130,000 workers were employed to construct this line and they worked at an altitude of 3,000 metres above the sea level most of the time because 90 per cent of the railway line is at that altitude and higher. x. The line’s annual freight capacity is 10 million tonnes. xi. It brings the Chinese railway close to the Indian border and gives it unmatched capacity to move military personnel and equipment speedily in case of an emergency, thereby providing it with strategic advantage against India. xii. The construction of the line began in March 2015 and was completed in June 2021, in a little over six years.

My attention was drawn to this engineering feat by China because I was making enquiries about the completion of my favourite railway line between Koderma and Ranchi via Hazaribagh in Jharkhand. It is my favourite railway line because ever since I started my political career in Hazaribagh, I was told that anyone who fulfilled this long- cherished dream of getting Hazaribagh connected by rail would be remembered by the people of Hazaribagh for a long time. So I took up the challenge. I soon realized that this dream could be turned into reality in three ways: first, there could be such a mass uprising for this line that the Government of India would be left with no option but to give in to the popular demand. Second, the line was necessitated by urgent and unavoidable economic reasons and, third, by an interested person who had enough influence in the GoI to get it done. I tried the first option first. I announced that we would sit on a dharna on the national highway connecting Patna to Ranchi via Hazaribagh. I expected massive crowds to turn up for the dharna as the rasta roko was being organized for their benefit. But only a few of us turned up at the appointed time. Undaunted, we still sat on dharna on the road. We were soon rounded up by the police and sent to jail. The people of Hazaribagh were not stirred. They wanted the railway line but wanted someone else to carry the can.

The second option was a non-starter as there was no overwhelming economic reason yet for the construction of this railway line. Ultimately, it was the third reason that worked. I became the finance minister of India in March 1998 by chance and Nitish Kumar the railway minister. In those days, the finance minister used to examine and approve the railway budget before the prime minister accorded his final approval. So when Nitish Kumar met me with the draft railway budget, I pleaded with him to get the construction of Koderma-Hazaribagh-Ranchi railway line included in the budget. He obliged and that is how this project saw the light of day. Prime Minister Atal Bihari Vajpayee travelled to Koderma to lay the foundation stone of the railway line in March 1999.

I kept monitoring the progress of the line as long as I was MP of Hazaribagh. It was with a lot of effort and continuous monitoring that the line up to Hazaribagh was completed by the end of 2014, a distance of 80 kms. I invited Prime Minister Narendra Modi to inaugurate the line; he kindly agreed and the Koderma-Hazaribagh section of the line was inaugurated by him on February 20, 2015 much to the delight of the people of Hazaribagh and those en route. The work of construction up to Ranchi is still going on. The total distance between Koderma to Ranchi via Hazaribagh is 196 kms. The proposed date for completion of the line up to Ranchi is December 2021. Even if the Indian railways kept that date, it would have taken us 22 years to complete a railway line covering a distance of 211 kms.

I am mentioning the example of the two railway lines, one in India and the other in China, to underscore the vast difference in approach of the two countries as far as project formulation and execution are concerned. I am not going into the reasons for the rampant time and cost overruns involved in the execution of projects in India and, surprisingly, even material over-runs in many projects. India cannot be a great country with such lethargy in project execution.

Yashwant Sinha is a former Union finance minister of India