A strong Opposition is central to the democratic edifice 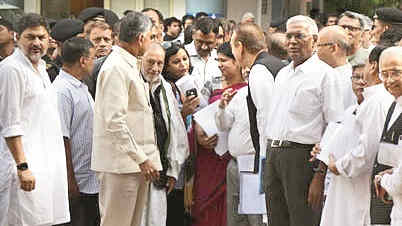 Opposition parties are a fundamental aspect of democracy. A distinctive feature of democracy lies in dealing with difference. Kautilya and Machiavelli, two authorities on Statecraft, treated difference as a threat to stability. However, unlike feudalism or communism, democracy provides institutional status to the Opposition, incorporating it within the larger canvas of governance. In modern times, J.S. Mill, the liberal, did not recommend liberalism to India because, according to him, Indians had not reached the stage of self-rule. Despite this, democracy endured in India.

The Opposition maintains constant vigil on the ruling party’s activities and provides the people with political choice for future elections. Understanding democracy through the Opposition party can reveal a novel, exciting picture. As the name suggests, the primary duty of the Opposition party is to oppose the policies and programmes of the party in power. However, the purpose of such opposition is not to impose its views in place of the ruling party’s. Instead, it needs to interrogate and critically evaluate, highlighting limitations and risks, explicit or otherwise, in the policies proposed by the government. The Opposition, thus, has a tricky and complex role to play and wait for its turn in the next elections.

One of the complexities is choosing between maintaining consistency and playing the role of the opposer. For example, when in power, party X proposes programme S. Opposition party Y opposes S. If Y subsequently comes to power and chooses to promote S, X should strictly oppose S even though X had proposed it earlier. In this way, X helps expose any weakness in the programme, thereby minimizing errors in the policies implemented by the ruling party. Such role-playing also allows the Opposition party to examine its policies in a new light.

Any questioning regarding the moral consistency of the Opposition party needs to consider this crucial political role assigned to it. The party in power can have long-term, deleterious effects on the functioning of democracy, undermining the open-mindedness and the continuous exploration of truth that are central to liberalism. The method, therefore, is far more critical than the moral consistency in upholding liberalism and the principles of democracy. In discharging this task, the Opposition parties can examine the ruling party’s policies in detail and from different angles. The party in power should facilitate this as they fulfil a duty essential to upholding a healthy democracy.

Given the broad scope to criticize, the Opposition needs to vary its approach and avoid repetitive, predictable arguments. Adhering to expected lines of debate would expose the underuse of opportunities at the Opposition’s disposal and make it easier for the ruling party to circumvent criticism. This would weaken the Opposition’s ability to make a critical assessment of the government’s policies. Instead, the Opposition party can bring new facts into the discussion, offer new interpretations, and reveal new dimensions, helping both the people and the ruling party understand the policies. This philosophical method is a distinguishing feature of liberalism and democracy.

One can find creative ways of opposing British rule in India in the works of modern Indian thinkers. For instance, Macaulay’s Minute on Indian Education presented all Western policies as good and all Indian practices as bad. Accepting this education policy was, therefore, tantamount to accepting British rule in India. On the other hand, suppose everything in Indian education is awful and rejected and the only perfect alternative is modern Western education. In that case, it leads to the next question — who can impart this education to Indians? In Macaulay’s colonial project, the answer is already embedded in the question — namely, the British. That would be their justification to be in India and to remain here, thereby continuing colonial rule.

We can find a counter to this trap in the writings of Swami Vivekananda and Sri Aurobindo. Macaulay’s underlying formula was based on ‘either-or’ — India could either continue with the existing education system and be doomed or reject the current educational practices entirely. Vivekananda and Aurobindo, however, abandoned this ‘either-or’ formula. Instead, they chose to accept some desirable features of the modern West and the positive aspects of Indian tradition. They conceded that there are evils in Indian society. They took the list of evils from their adversaries and made it their own. However, they also reminded those like Macaulay about the vices and the limitations of the modern West.

The counter-strategy provided a creative alternative to the predictable rejection usually put forward by the Opposition. It offered a formula to undermine the British strategy and carve out an initial space for the Indian freedom struggle. This ‘and’ model is seen in post-Independence Indian society far more than Macaulay’s ‘either-or’ model.

Similarly, Mahatma Gandhi proposed non-violence as an unconventional and creative political strategy to combat the British which led to much confusion for the mighty raj. Initially, they were unable to understand it as it did not fall within their rulebook. Then they underestimated it. When they ultimately recognized the power of this strategy, it was too late to deal with it other than by conventional force. Once that failed, they finally agreed to discussions. These instances give us an insight into the extensive opportunities available to those who are in the Opposition.

More importantly, despite dissent, Opposition parties should refrain from ignoring and repressing the presence of the ruling party. This can have unforeseeable, long-term consequences. For example, in Hind Swaraj, Gandhi engages in dialogue with his immediate Indian adversaries. Likewise, the Opposition needs to engage with the ruling party’s policies and uphold the people’s best interests. Similarly, the ruling party needs to create a common platform to facilitate this engagement.

The arguments put forward by the Opposition can help people evaluate the government’s policies better and take decisions regarding the next elections. This view through the lens of the Opposition thus gives us a different, and more precise, picture about the functioning of democracy. In addition, several examples from the Indian national movement can further enrich our understanding of the relationship between ruling and Opposition parties.