A precious milestone of Jesuit legacy and education

The atmosphere in today’s Jesuit institutions is more relaxed, pluralistic and tolerant of individual idiosyncrasies 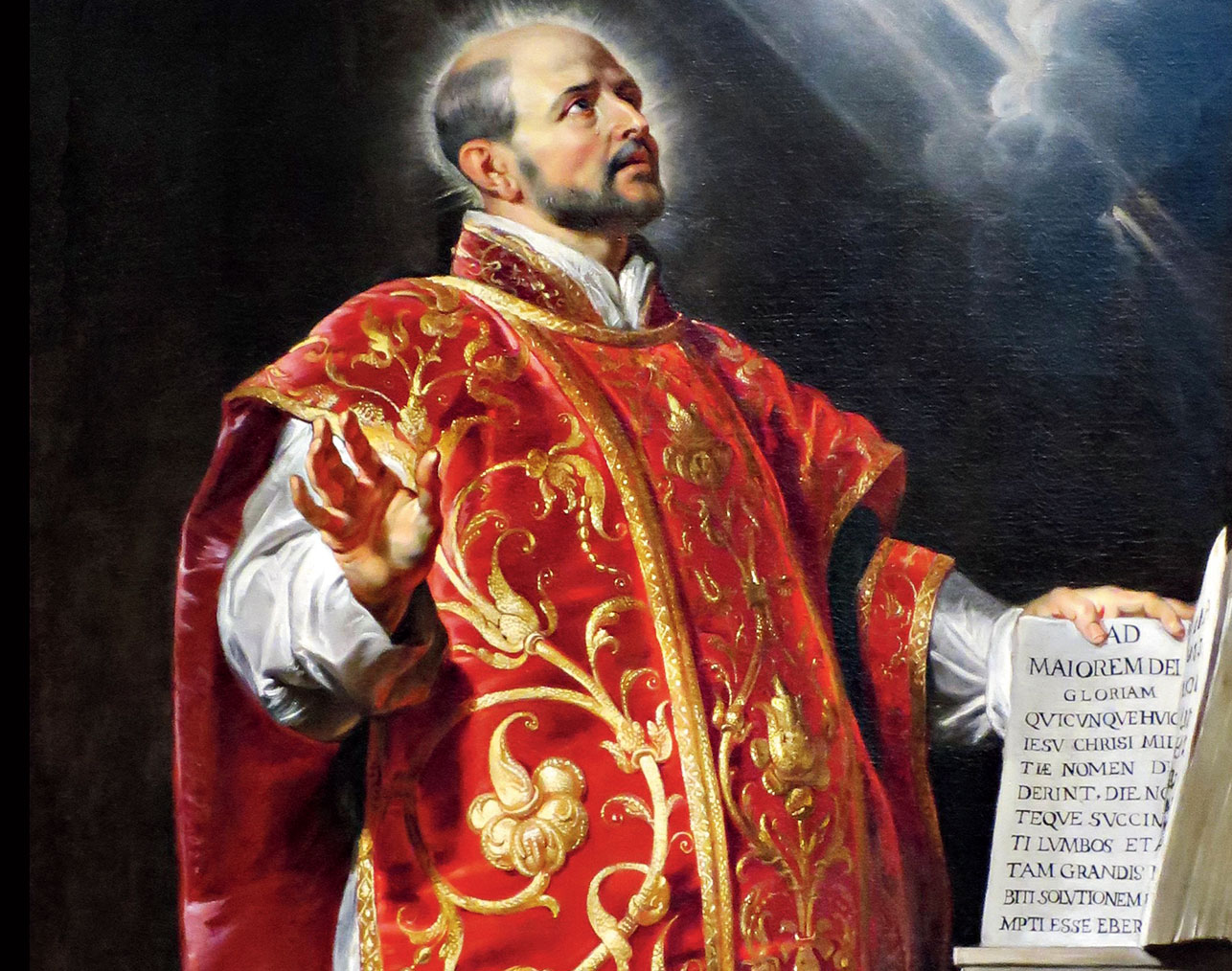 Ignatius was a remarkable character who formed a precious milestone in the history of the 16th century. In 1542 he sent his greatest son, Francis Xavier, to India. The latter worked in India for 10 years, from 1542 to 1552, called the Xaverian decade. July 31 marks the feast of St Ignatius
(Detail from a painting by Peter Paul Rubens / Wikimedia Commons)
J. Felix Raj   |   Published 31.07.19, 03:22 AM

Early 16th-century Europe experienced major changes and, influenced by the discovery of the Americas and an ongoing European Renaissance, the culture began to embody the values of a modern world. Economies were shifting and a time of scientific innovation was making its mark upon the cultural contours of civilization. Stirred by the advent of the printing press, information spread with hitherto unmatched ease, creating an impact similar to that of the internet in our time.

The University of Paris was like the Oxford and Stanford universities of our times; it was the second oldest university in Europe. Instituted in 1200 by King Philip II of France, it was internationally reputed for its academic performance in the humanities — notably in theology and philosophy — it introduced several academic standards and traditions that have endured the test of time and spread internationally. Vast numbers of popes, members of royalty, scientists and intellectuals of Europe were educated at this university. In 1970, following the May 1968 events, the university was divided into 13 autonomous universities.

Francis Xavier, a nobleman from Basque, Spain, joined the College Saite-Barbe at the Paris University in 1525 where he spent 11 years, first as student of the Master of Arts course and later as lecturer of Aristotelian philosophy. In 1529, a new student, Ignatius of Loyola, came to Paris University to study Masters. Ignatius, at 38, was much older than Francis who was 23. Ignatius had gone to Paris after many adventurous activities — first as a knight and then a pilgrim after his conversion.

Ignatius convinced one of his classmates, Pierre Fabre, to become a priest, but was unable to persuade Francis, who had aspirations of a worldly career and was not interested in the priestly vocation. At first Francis regarded Ignatius as a joke and was sarcastic about his efforts to convince students to become priests.

Ignatius attended Francis’s classes on philosophy. From the first day of class, Ignatius would walk fast to the door and would repeat the words: “What does it profit a man if he gains the whole world and loses his soul?” as Francis left the room. After a few days, Francis asked him to stop, but Ignatius persisted.

Ignatius was eventually able to break through Francis’s resistance and bring him over to his side. Further, Ignatius was able to gather four more fellow students to his consideration and all seven of them, under the leadership of Ignatius, formed a community and founded the Jesuit order. On August 15, 1534, they pronounced solemn vows regarding their lifelong work for god in the Chapel of Church of Saint Peter at Montmartre, Paris.

Ignatius was one of those remarkable characters who formed a precious milestone in the history of the 16th century. A Basque nobleman, he was just over five feet tall. His father entrusted his son’s education to an official at King Ferdinand’s court. Ignatius tenaciously went through the long training and became a brave knight.

In May 1521, in the battle between Francis I, the king of France and the Province of Navarre, Ignatius was wounded in both legs. In hospital, he underwent a painful and unsuccessful operation. During the long weary weeks of convalescence at home Ignatius read two books, The Life of Jesus Christ by Ludolph of Saxony and the Flos Sanctorium, which transformed his life.

In 1522, he left home went to the shrine of Our Lady of Montserrat near Barcelona. There he hung his sword and dagger as a pledge of his new consecration to Christ and his mother. For the next year he lived on alms, spending long hours in prayer. There he wrote his “Spiritual Exercises”, the most efficient and widely used retreat manual today.

Firm in his determination to serve god, but realizing that he must garner the weapon of knowledge, he went to the University of Paris to study. His close friends used to say that Ignatius had an inherent facility for finding god in all things.

The end came suddenly for Ignatius. In 1556 he fell ill. On July 30, he sent Father Polaneo to Vatican for Pope Paul IV’s last blessing. Next morning at sunrise, shortly after the secretary’s return, Ignatius passed away peacefully on July 31. His feast is celebrated throughout the world on July 31 every year.

The Indian mission of the Jesuits lies at the very origin of their order. It is to India that Ignatius of Loyola sent his greatest son, Francis Xavier in 1542. Xavier was a zealous ‘missionary on the move’. He worked in India for 10 years, from 1542 to 1552, called the Xaverian decade.

Perhaps Jesuits impart the best-known education in India. The Jesuit educational initiative is the most extensive private network in the world today. They conduct not less than 62 university colleges, 18 institutes of business administration and 200 high schools spread throughout the country, almost all of them among its most reputed (St. Xavier’s, Calcutta, Mumbai, Ranchi; Loyola, Chennai, Vijayawada; St. Joseph’s, Bangalore and Trichy; XLRI, Jamshedpur). In them, more than 4,00,000 students belonging to every religious, linguistic and socio-economic group receive their education.

Any worthwhile book on the history of education will mention the contribution made by European educational thinking towards the development of mankind during the 16th to 18th centuries. It was at this time that Jesuit schools were opened all over Europe and in them the newly discovered classics of Greece and Rome were successfully used in the formation of the young. The Ratio Studiorum or Guide to Education produced by the Jesuits at the end of the 16th century remains an educational classic down to our day.

Jesuit educational methods derive directly from the order’s own spirit. First, there is a willingness to use any branch of human knowledge, modern languages, philosophy, theology, medicine, law, media and every branch of science and technology — nothing is taboo in Jesuit education. Secondly, there is the stress on character formation and discipline combined with the development of freedom. Next is the continual drive towards self-improvement, by stretching talents and abilities in every field as far as they can go. Prizes and awards stimulate ambition and individual emulation; simultaneously, teamwork is encouraged through the “house system” in schools — a Jesuit innovation.

No Jesuit education is complete without attention to the development of the moral and intellectual qualities of leadership: love for the country, integrity, human relations, understanding, hard work, organizational ability, cooperation and teamwork, and the power of expression in speech and writing. A Jesuit school or college aims to form “men and women for others” who will be agents of needed social change in their country. Jesuits view their work as “the service of faith in God and the promotion of Justice in the world”. Special and preferential treatment is given to economically poor students in terms of financial and academic support.

Jesuit educational methods have been criticized by some as being too rigid, too stereotyped, and geared chiefly to the elite, intelligent and the determined, owing to the excessive stimulation of ambition. Modern Jesuits are probably more aware of their educational approaches in the context of the national and local socio-economic realities, and as a result there is a very different atmosphere prevailing in today’s Jesuit institutions, at once more relaxed, less formal, more pluralistic and more tolerant of individual idiosyncrasies.

One may wonder what keeps these Jesuits united or keeps them going. The answer lies in their basic characteristics, which are, first of all the order’s ‘humanism’ — its refusal to condemn anything that is human — and its willingness to use all human knowledge and achievements in the service of god and people. Another Jesuit characteristic is obedience or flexibility, willingness to adjust and to compromise. The only thing a Jesuit is taught to be rigid and uncompromising about is moral evil or sin.

Another mark of the Jesuit is the way of combining stern inner discipline with maximum freedom for each individual member in external life and in the choice of methods. Finally, there is a certain typical thoroughness in all that is undertaken. These are expressed by the frequent use of the word “magis”, “greater”, “higher” in relation to the goals, the Jesuits, as individuals and as a community, strive for. Their age-old maxim is to aim at the greater good for the greater number of people. They must not forget to live up to that.

Calcutta Xavier's is model for Mumbai