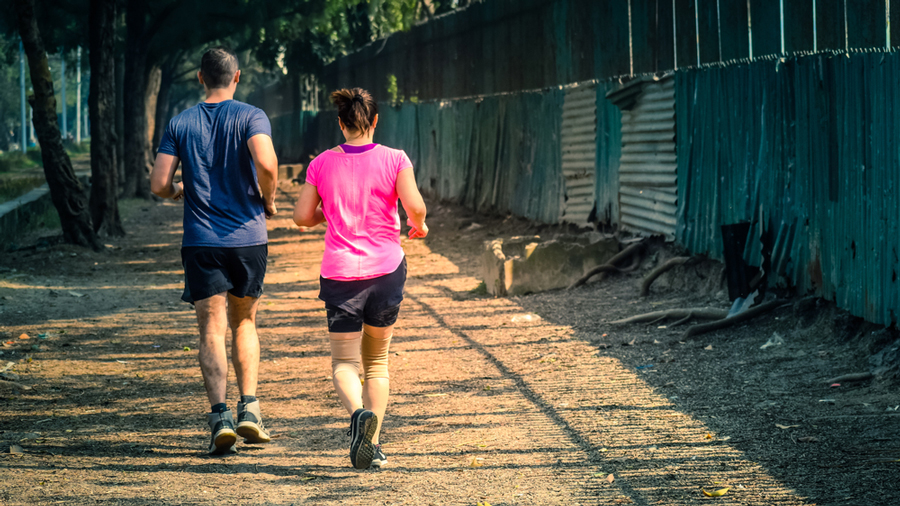 Governments go out of their way to keep liquor shops open or permit home delivery of alcohol when lockdowns strike. But a morning walk or a run is no-no. In the first case, the State has revenue at stake. In the second, a health-conscious individual offers only notional gains to the State or the economy.

The Covid-19 wave of 2021 is different in that the majority of the infected are asymptomatic. From among the asymptomatic-infected, those that tested positive, largely quarantined at home and recovered. A mild infection may (among other reasons) point to underlying good health. Maintaining good health is a sensible precaution against the onset of disease and when disease strikes, it helps minimize its impact.

Since we can confirm infection only by testing and since not everyone tests, the asymptomatic segment acquired hues of a ghost in our midst carrying the virus. Walkers, runners and cyclists were sent home because even if they were healthy or trying to be so, they could be transmitting the virus. Hence the crackdown. Similar enthusiasm wasn’t there in probing the comorbidities, habits, addictions and lifestyle-related problems that enhance vulnerability to infection. How are these conditions acquired? It is the elephant in the room nobody likes noticing.

Sample, for instance, the altered social status of stress. Our tryst with stress commences in school. Academics dominates; sports enjoy no priority. It’s just the beginning. Awaiting is India’s marriage market, which values the prospect of sky-high success in candidates. Pursuit of career, status, wealth and property follow. We now know that stress — it affects immunity — is no longer the fashionable accessory of success we once liked to flaunt. Stress doesn’t get meaningfully discussed because doing so demands questioning the role of money in life, the nature of our jobs, the social units we live in, the insecurities they attract, the purpose of life and so on.

Such inquiry exposes the rat race India authored for itself, courtesy the matrix of high population and the feudal yardsticks for deciding success. It is an unhappy mire bogging down many. Yet, the inability to find meaning in it is rarely admitted. Doing so is seen as unmanly and, of late, unpatriotic. The easier option (as witnessed during lockdown) is to deny those trying to de-stress or invest in health their rights and cage them as carriers of the virus.

Through the lockdown of 2020 and the lockdowns by other names of 2021, the enforcers rarely mentioned mental health. Depression’s toll remains unknown. Governments promote the notion that India behind closed doors is unquestionably happy. In media interviews, top healthcare industry officials, when asked of the paradigm shifts caused by Covid-19, highlighted the promise of medical insurance and digital health missions. Few emphasized easily accessed preventive measures — like physical activity — that augment health at little added cost.

Then, there is the dispute of outdoors versus indoors. Right from the first wave (2020), it was reported — more in foreign countries, where the active lifestyle is on secure footing — that the risk of catching the virus while engaged in physical activity outdoors isn’t as high as indoors provided safety protocols like physical distancing are followed. The second wave in Mumbai was characterized by more cases in apartment complexes and high rises. On April 26, a senior Central government official was quoted in the media advising the use of mask at home too. If you look for the culprits triggering the second wave, you will notice that the list includes indoor gatherings like weddings. And lest you argue that the Kumbh Mela was held outdoors or that Covid-19 has reached the Everest base camp, let me add: an active lifestyle rarely comes with that fanatic attitude associated with religion. As for the virus at the EBC: it should have been avoided but don’t forget the context — Everest is business; where money rules the imagination, distorted priorities follow.

Within days of Section 144 declared in Maharashtra and life reduced to essentials, slices of Mumbai media included walkers, joggers and cyclists among those allegedly disrespecting the new norms. Sure, they disrespect norms if they are out in groups. But barring exceptions, that wasn’t the trend during the second wave. People venturing out were much fewer than before. Those who walked, ran or cycled typically did so alone and kept distance from others. The website, Scroll, reported that being physically active enhances antibody count after vaccination. Why then do we discourage the culture of being physically active? Going forward, this must change. A morning walk or run is a less damaging fix than State-supported alcohol dependency.