By divine right Solve this riddle 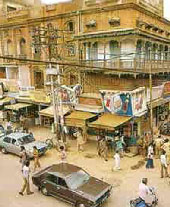 ?I was born in Goa in 1924. My grandmother and grandfather were both chronic drunkards.? So begins a short autobiographical note appended at the end of Francis Newton Souza: Bridging Western and Indian Modern Art by Aziz Kurtha. He does not tell the reader more about himself. His father was a teetotaller who died early leaving behind a young widow, a daughter who died soon after himself and Newton. The mother moved to Bombay to earn a living as a typist and by stitching clothes. Newton learnt how to stitch his trousers? buttons. He had no training as an artist but he drew obscene pictures of nude women in school lavatories. His teachers spotted him because no other boy had the same gift of drawing as he. While still at school, Newton decided to become an artist despite his aversion to the smell and look of paint coming of a tube; it reminded him of slimy serpents.

In 1949, he migrated to London. He had very little money. He was able to survive because of the bounty of people like the poet Stephen Spender and Harold Kovnen, who bought everything he painted and lent him money when he ran out of it. He does not tell us anything about the women in his life. Apparently, there were quite a few. There was his Goan wife, who ran a small art shop where she continued to sell her husband?s pictures even after he divorced her. There was his mistress, Liselotte Kristian, who bore him three daughters without marrying him. From the many paintings he made of her, it appears that she must have been the one real love of his life. In the book there is one of Lila, as he called her, in the nude when she was pregnant. It is in water colour and gouche. It is one of the most beautiful nudes that I have ever seen. He apparently refused to sell it. It is a masterpiece but its whereabouts are not divulged.

Souza?s paintings went through three different phases. To start with, his themes were Biblical: Madonna and Child, the Last Supper, Crucifixion, resurrection and so on, then he turned to Hindu iconography of South Indian bronzes and erotic sculptures of Khajuraho, Konarak and other temples. Women in these paintings become full bosomed, broad hipped, with large buttocks. He developed what can be best described as vulva-fixation, explicitly depicting women?s private parts. An element of lust becomes manifest. During the period finally in Europe he was exposed to works of European as well as avante-garde painters: Cezanne, Titian, Courbet, Picasso, the Cubists and Dadaists. Souza combined all three in his most productive phase to become the pioneer of modern Indian art. M.F. Husain recognized him as his mentor. His paintings were bought by the Tate Gallery and Albert and Victoria museums. He had one-man exhibitions in London, Paris and New York. On one of his home visits he was taken ill in Bombay and died on March 28, 2002. He was 78.

Kurtha asked me to translate them into English ? which I did. He invited Souza to Abu Dhabi, kept him as a house guest and arranged an exhibition for him. Souza did not find many buyers for his art. His paintings of village women is as, if not more powerful, than Amrita Shergill?s. Kurtha has made amends by producing a lavishly illustrated coffee-tabler of the best of Newton Souza?s paintings. It is a veritable feast for the eyes.

God?s own incarnation, I am the King

So the people must clearly

That they live and die as I would,

They must clearly understand

That, as per God?s command, if I

My own brother and his entire family

They should know the fate of their

How dare they talk of constituent

To Louis the Fourteenth of France!

Cursed be the age, O my royal rage

That my imperial palace should

O this democracy, this common

I will do much things, I know not

On the way, the bell boy could not figure out how to split $5 evenly between three men, so he gave each man a $1 and kept the other $2 for himself. This meant that the three men each paid $9 for the room, which is a total of $27, add the $2 that the bell boy kept, which makes it $29. Where is the other dollar?