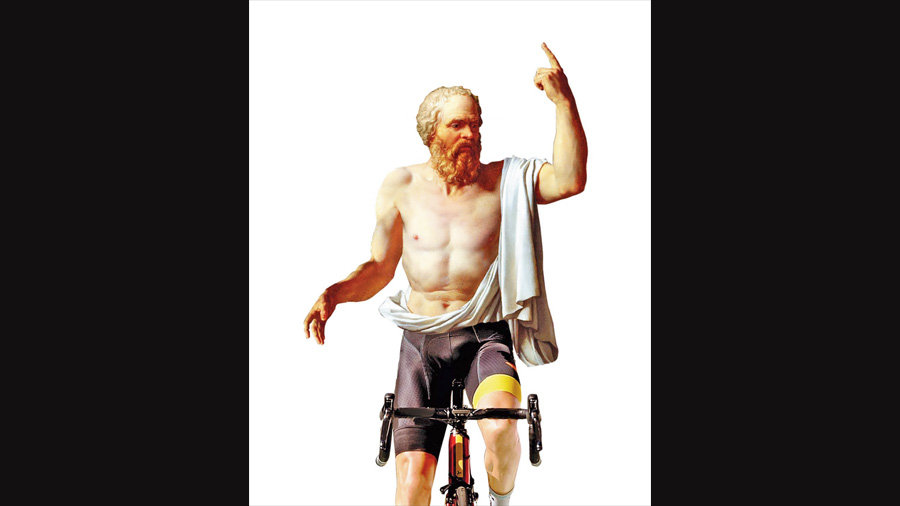 Many people, not just soccer fans, know about the outcome of one of the most famous ‘football’ matches in history. It was played between Greece and Germany, with the Greeks scoring the winning goal through Socrates, against a German team led by Hegel. It seems that philosophers like sports — or is it the other way round? The philosophers’ football match is revisited in a French book titled Socrates on a Bike (Socrate à vélo). There, the Greeks (no great cyclists usually) have been allowed to compete in the most celebrated cycling race, the Tour de France. Their team is led by Socrates, with Plato and Aristotle as his teammates.

But while the football match is one of Monty Python’s most celebrated sketches, the book about cycling is authored by a professional cyclist, Guillaume Martin, currently the leader of the Cofidis cycling team, and a recent finisher in the 11th position in the Tour de France, the world’s most famous race. Martin, who studied philosophy at university while training as a professional cyclist, is out to prove that sportspersons do have interests other than physical exercise. Such clichés are constant in sports, especially in cycling, which is wrongly seen as being all about pedalling (perhaps on steroids). In the 1980s, another French champion — he won the Tour on two occasions — was nicknamed “the intellectual” because he wore glasses.

The Tour itself was a rather strange affair in this Covid year. Its success depends on a couple of factors. It is staged in the summer, when people have more time to gather on the sides of the roads to catch a glimpse of the speeding pack of riders (the peloton). It also relies on the stories told by journalists, originally by the sports publication, L’Auto, which launched the competition in 1903. Live television has now taken over as the favoured mode of engagement with the race. This year, it was moved from July to September. Spectators were sometimes allowed on the roads, but scarcely around the finishing line — this was damaging to the town councils who paid a significant amount of money to host the Tour. But television ensured the success of the show — everyone could share the drama of the penultimate stage when the yellow jersey and favourite, Primož Roglic, lost the competition to his younger compatriot from Slovenia, Tadej Pogacar.

Stories are a big part of any sport, perhaps none more so than cycling. So it was appropriate to turn to Martin’s book on cycling to relive some of the excitement of watching the race. In his philosophical tale, Martin weaves together, in a whimsical but engrossing way, stories about the author as a cyclist and as a philosopher, stories about the Tour de France, as well as philosophical reflections. Genuine cycling references can be detected in the middle of portraits of the Greeks on their bikes and philosophical allusions pepper the stories of cyclists training for the competition. The book recreates the preliminaries of the Tour before describing a fictional race with recognizable stages. While the introduction offers a pre-Tour press conference in which the Greek philosophers have to field questions such as “what is it like to think on a bike?” the aim is to bring together sportive and intellectual matters. The posture of the philosopher-cyclist is defended by Martin with a healthy dose of self-irony. The irony extends to journalists who have approached him with interest, but whom he finds are forever repeating the same questions, voicing the same prejudices about sports, and lacking in an intellectual dimension. All the clichés peddled by journalists are exposed by Martin, who ascribes them to the economic interests surrounding mega-events such as the Tour de France and to the commercialization of the sport during the summer month in which it usually takes place. In turn, cyclists feel obliged to conform to the same clichés.

Martin makes an interesting argument about sports. He argues that there are two types of intelligence involved in physical activities. Theoretical intelligence, which is of reflexive nature, dealing with tactics, knowledge of the rules and so on. Then there is practical intelligence, which is largely instinctual, proceeds from the body, and from the training of the body. Rather than perpetuate the Western separation between the physical and the intellectual (and, indeed, the superiority of the intellectual over the physical), we have to remember that both go hand in hand. This is why Martin wants to pursue the connections between sports and philosophy; both activities deal with what humans can or cannot achieve.

Martin brings to the debate his experience as a professional cyclist. Being a champion is a full-time job, which requires work. A champion thinks first and foremost about winning, not just about taking part or about fair-play. Competition is about opposition, about asserting yourself against others, not about bringing people together. But Martin is a playful character who retains a healthy sense of distance. He knows that cycling, all sports in fact, are, first and foremost, games. They tell stories which, in turn, people like to watch on television or, health situation permitting, in a stadium or along the roads. They tell stories which people read about, and which then circulate.

And so, from the idea of the intellectual cyclist, from the cliché of the philosopher cyclist, emerges the fanciful tale of philosophers on their bikes, running the Tour de France. Following poor results, the German team is now managed by Alfred Einstein who tries to inculcate into his team the principles of hard-pedalling based on the idea that space shrinks with speed. According to Einstein, if the Greeks are such good cyclists, it is thanks to philosophy. Hence, he tries to enroll a few philosophers.

Before getting to the Tour, the cyclists have to train to get into the spirit and the team managers have to recruit and select the best players. Martin applies this principle to his teams of philosophers. Einstein finds it difficult to assemble a suitable group: Kant drops out; Schopenhauer is not good enough; Nietzsche, the most gifted, is too individualistic (although he ends up winning the king of the mountains competition). Marx and Freud stay on, joined by Habermas. As for the Greeks, the tensions in the team initially lead Socrates to leave the outfit. They do not perform very well in the early races, nor do the Germans, who have also lost their coach. But just before the start of the Tour, Socrates rejoins the team, the leader is reinstated, the team has found its composure and unity. Even the French field a team, with Pascal, Bergson, Sartre among the riders.

After the preparations, the race. While the book follows all the stages of a fictional Tour de France, the aficionado may recognize famous landmarks of past Tours as well as specific types of stages (time trials, mountains, sprint finish). Cycling tactics (when to launch a breakaway) are revisited in philosophical terms. The technical, tactical, and physical efforts involved in the stages are approached through the lens of philosophy. The perception of time in cycling, as experienced by spectators, is transformed through a pastiche of the French philosopher, Henri Bergson, famous for his writings on time. The anonymity of the peloton is shaken by the French philosopher, Jean-Paul Sartre, who exhorts the cyclists to free themselves from predefined race tactics. The author himself finds in the Greek concept of Kairos a way to analyse that irrational moment in a race when a champion abandons perfect control in favour of risk, excess, and inspiration. He also finds in the ancient philosophy of stoicism a model on how to handle the pain involved in such a race.

Martin’s book is an invitation to think about sports, to disregard the oppositions between mind and body, between the intellectual and the physical. It gestures towards the freedom of the cyclist and the freedom of the writer, finding a form of fulfilment in the conjoining of both.

The author is professor of English Literature at Sorbonne University, Paris